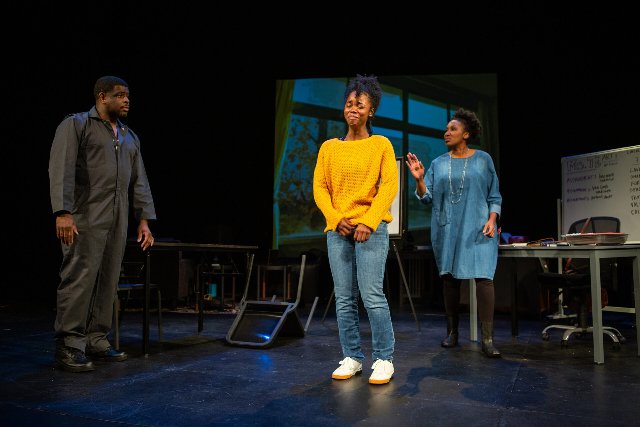 For one year, we lovers of live performance have suffered without our favorite pastime.  On the one-year anniversary of the Covid-19 pandemic comes the closest thing the Bay Area has had to live theater.  Although it lacks the palpable dynamics of “the smell of the greasepaint and the roar of the crowd,” San Francisco Playhouse and Lorraine Hansberry Theatre have joined to produce a filmed staging.  While we all look forward to the vitality and urgency of live performance as well as the associated socialization, the current streamed performance of [hieroglyph] provides great satisfaction that has been missed for some time.

[hieroglyph]’s plot line concerns the displacement of Davis, a 13-year-old Black girl, from the world that she understands.  In the aftermath of Hurricane Katrina, she and her father, Ernest, relocate from New Orleans to Chicago.  The natural disaster destroyed her memories; disconnected her from the things that she knew and loved; and triggered the spatial and marital separation of her parents, as her mother stayed behind to live in a FEMA trailer.  Davis now tries to reconstruct the happy moments of her life but is haunted by the more recent horrors.

Often, children find relocation more traumatic than adults.  Unsurprisingly, Davis is not adjusting well and collapses academically, except in one class – art.  Although she exhibits talent in her sketches of her previous life, disturbing characteristics are revealed that may reflect deep seated anxiety.  Her understanding teacher, Ms. T, takes a special interest in the girl’s talent and problems.

Playwright Erika Dickerson-Despenza’s poignant drama deals with trauma and loss that most of us, thankfully, will never have to handle. She speaks to the fears that women particularly suffer – and moreso, women of color; and moreso yet, teenage girls of color.  These core elements are enhanced by a rich exploration of boundaries – parent-child, teacher-student, parent-teacher, friend-to-friend, as well as those of professional and sexual propriety.  Causes of conflict are manifold. While many of those that are addressed result from conscious awareness of the participants, others derive from lack of understanding, suggesting that not all clashes result from intent, but often from naivete about the conditions of other people.

Dickenson-Despenza’s script and Margo Hall’s direction keep the action moving and interesting throughout, albeit with a little didactic bent.  Ms. T is the spokesperson for the playwright’s sympathies, but her inclinations deserve airing.  For instance, the play promotes the painting of Black artist Ernest Crichlow, who blossomed under the Works Progress Administration during the Great Depression.  Appropriately, the teacher’s analysis in class of his cynical anomaly “Lovers” advances the theme of sexual suffering of Black women.  Conversely, whereas discussion of Jim Crow is central to understanding racial abuses perpetrated on Blacks in this country, it only tangentially relates to the matters at hand.

Some minor flaws exist in the text that can’t be discussed without spoiling the plot.  One that can be referenced is that the denouement is telegraphed without sufficient nuance, especially to those familiar with a particular movie that follows a similar path or other works like it.  Most of the dialogue is quite clear, but when the two girls are together, their teen talk can be a little harder to follow.  But these issues are minor glitches in a highly recommended theatrical event.

It is a pleasure to see natural theatrical staging again and the San Francisco Playhouse’s revolving stage put back to work.  Bill English’s scenic design is skeletal but suits the play perfectly.  Another key element in creating an outstanding production is the camera work, which is perhaps the one improvement over live performance.  While the cinematography won’t win an Emmy, the use of multiple camera positions and variable focal lengths, including close up shots, adds vibrance that would be missed from Row G in a theatrical space.

[hieroglyph] by Erika Dickerson-Despenza is co-produced by San Francisco Playhouse and Lorraine Hansberry Theatre and is available by online streaming through April 13, 2021.