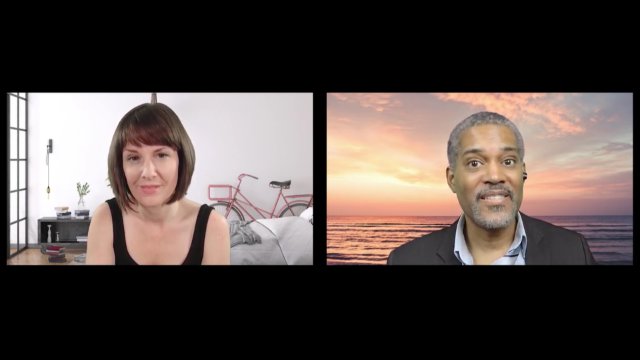 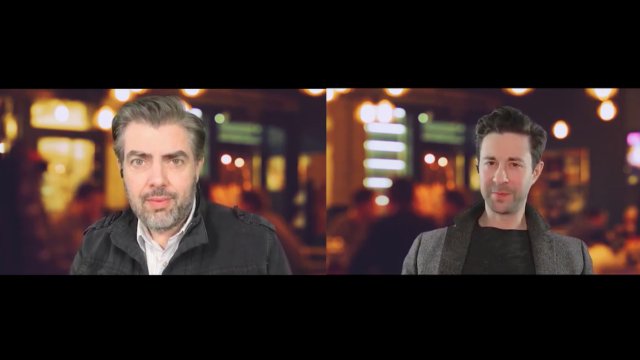 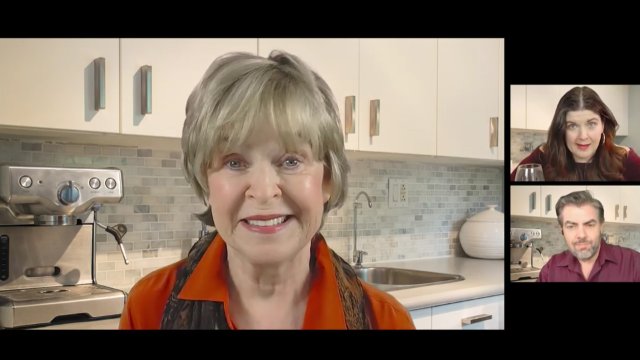 A problem with online theater, especially a taped production, is that performers cannot take bows. In addition, the actors cannot bask in bravos, cheers, and sustained applause.

Certainly, cast members of New Normal Rep.’s inaugural production of the dramedy, Jericho, deserve high praise. They are offering impressively natural, nuanced performances. And New Normal Rep. Artistic Director Jack Canfora, as well as his team, have earned kudos for a superb debut production. If the company can continue staging works at this level, New Normal Rep. will be a gem for many years to come — long after the pandemic is over.

New Normal Rep., a new streaming theater company, is “dedicated to producing reflective and inclusive plays,” according to publicity material. No doubt, for its debut production, the company chose an especially timely, intense, touching, relatable, and funny piece in Jericho. Canfora penned the play.

To be sure, Jericho is not original; we’ve seen this type of story unfold on stages. You know — the dysfunctional family, dinner table dramedy in which each character’s temper and nerves add to the non-culinary simmering stew heating the apartment. For instance, we’ve seen such material in Stephen Karam’s explosive The Humans, and Tracy Letts’ scorching August: Osage County.

In particular, The Humans shares a few things in common with Jericho. For instance, both pieces at least partly take place around a Thanksgiving dinner table. Further, the family members are on edge for various reasons, one of them being the tragedy that took place on Sept. 11, 2001. Also, these plays’ endings are hardly happily ever after, neatly tied up conclusions. As a matter of fact, what happens to members of the long-suffering Blake family in The Humans, a Tony-winning play and a Pulitzer-finalist, is mysterious and open to interpretation. During The Humans, creepy noises suggest the unease the characters no doubt feel. While such scary, suspenseful noises are absent from Jericho (except for foreboding music in New Normal Rep.’s production), its family, like the Blakes, does not have Thanksgiving foremost on their minds.

Jericho takes place in 2005 in New York City. The title comes from the neighborhood on Long Island in which much of the action takes place.

Four years have passed since Sept. 11, 2001. Beth, whose husband died in one of the towers as a result of the attacks, has been seeing a shrink for months. Also, she “sees” her late husband, Alec, an African American man, in the face of her therapist, Dr. Kim, an Asian woman.

Also, Beth finds herself caught between moving on after the tragedy, and remaining stuck in the past by dwelling on it. On the one hand, she is unable to keep from hallucinating in her therapist’s office. On the other, she is dating a young man, Ethan, whose brother, Josh, was in one of the towers during the crash. Josh survived. However, he is on the verge of divorcing his wife, Rachel. Since the attacks, he has steeped himself in his Jewish religion. In fact, he has decided to move to Israel because he feels Americans harbor views and attitudes not in line with his. Further, Josh has become angry, withdrawn, and argumentative. In fact, for most of the play, Josh is a thoroughly unlikable character with seemingly no redeeming qualities.

Was Josh in the same building at the same time as Alec? Did he push Alec to his death in a sudden instinct of survival? Such possibilities, and the fact that Josh and Beth are opposites in different ways, creates strong conflict in Canfora’s tension-filled, compelling dramatic comedy.

Jericho deals with several themes and topics. They include survival guilt, moving on tragedy vs. remaining in the past, the need for humor during stressful situations, what it means to be Jewish, connections to our faith/roots (or lack of such connections), caring for elderly parents, how we cope with personal and collective catastrophe, and how we deal with fraught relationships.

Jericho is ultimately about that tug of war between remaining in the past by dwelling on a tragedy vs. moving on. One could say that Ethan, to Beth at least, represents embracing the present and the future. On the other hand, Josh symbolizes remaining stuck in the past, unable to overcome intense emotions associated with past trauma. Caught in between is Dr. Lee, who is trying to push Beth forward with her life.

Four-time Academy Award nominee Marsha Mason smartly directs New Normal Rep.’s production. She is careful to highlight the tension in the text, as well as more touching and sarcastically humorous material. Also, Mason keeps the action moving fluidly – not too fast, not too slow.

In at least one scene, Beth is physically present with a therapist, Dr. Lee. However, her mind is absent. “Earth to Beth,” you sense that the therapist wants to say. Mason creatively illustrates this by placing Beth against a backdrop of a sky. To the viewer, the character looks as though she is sitting in the sky. In addition, when Alec’s ghost appears to Beth, he seems to also be sitting on the cloud-filled sky, essentially appearing from heaven. Speaking of backdrops, there’s enough visual hints in each scene to suggest a location, such as an apartment. And each scene is well-lit.

Meanwhile, the performances are some of the strongest you are likely to witness on any stage, virtual or in-person.

Eleanor Handley deftly plays Beth. She’s a woman on so much medication she could rival the pill-popping matriarch Violet in August: Osage County. But while Violet is hateful, Handley never imbues Beth with such a quality. Also, the performer doesn’t portray Beth as “crazy.” Rather, the actor portrays her as a well-meaning, nervous, articulate, expressive woman with a tendency toward self-deprecation. Through Handley’s performance, the character seems weary from all she has gone through since losing her husband. While Handley’s Beth is not perpetually riled up, she can become emotionally dysregulated quickly. And the performer is so convincing, it’s painful to watch Beth when she’s dysregulated. Also, she is clearly experiencing survivor’s guilt.

“There are some things it should be impossible to recover from,” Beth tells Dr. Lee.

Certainly, such a comment seems particularly timely today, when a pandemic has left so many people reeling with uncertainty, loss, anxiety, and overwhelm. Survivor guilt might also come into play, especially among people who have lost loved ones to COVID-19. And while thinking about Sept. 11, 2001 might no longer cause intense emotions for some, others might remain traumatized to the point that they can’t move on. It’s isn’t that farfetched to think that there are people still as traumatized as Beth and Josh.

Speaking of Josh, if Jericho were a long monologue with him as the sole character, the play would be unwatchable at some point.

Josh is so arrogant, bitter, and antagonistic, after a while you want to walk away or cover your ears and eyes in his presence. Indeed, until the latter part of the play, it’s hard to find even a hint of something redeeming within him.

For the majority of the play, in a performance blessed with spontaneity and naturalism, a brooding Jason O’Connell portrays Josh as Canfora has written him. The actor’s eyebrows are often lowered, and his accusatory facial expression drips arrogance, sarcasm, and irritation. The actor’s voice also takes on a bitter, accusatory, arrogant manner. As O’Connell plays him, Josh seems always on the verge of exploding. But it turns out that Josh is a character capable of change. And to his credit, O’Connell also nails the moments when his character has softened considerably.

However, Josh is solely belligerent during scenes between him and his wife, Jessica (a superb Carol Todd). In fact, you might find yourself looking for steam to rise during these scenes, when Josh and Jessica are hurling biting words at each other. Todd’s smile is hardly of the pleasant variety. Rather, it’s a stinging expression of scorn that Jessica has come to feel for Joshua. And Todd’s sarcasm-filled voice stings equally.

As Beth’s boyfriend, Ethan, Michael Satow segues seamlessly from convincing easy-going charm when he’s with Beth to bitterness during scenes with Josh.

Now, here’s where things can get confusing. The character of Dr. Kim is an Asian woman. But in the role, C.K. Allen makes no effort to sound like one. That’s because whenever Beth speaks to her, she sees in the therapist her late husband, Alec – an African American man in his 40’s. And so, Allen acts and looks the same, whether he is playing Dr. Kim or Alec’s ghost. Allen lends the therapist a concerned, yet honest air, and he plays Alec as a mocking, amused man, part of the play’s humor.

Jericho works due to its strong conflict, its mostly relatable characters, and Canfora’s lively, often humorous writing. For instance, Dr. Kim/Alec tells Beth, “You are not delusional.”

“That’s a little self-serving coming from an illusion,” Beth shoots back.

Jericho isn’t perfect. For example, it’s a bit of a stretch to believe that Beth would see her husband, an African American man, in her therapist, an Asian woman. Also, we learn little about the characters beyond their relationships to one another. We, for instance, never learn what they do for a living. So, what were Alec and Josh doing in one of the towers when a plane hit it? Did they work on one of the building’s floors? Were they there to see a friend or family member, or were they picking something up? We might be able to relate better to Josh and Alec if we knew.

One thing that we know about New Normal Rep is that it “exists not in spite of the pandemic, but because of it,” according to a press release. “Dedicated to presenting new and lesser known plays, via the internet, NNR will present works with divergent perspectives that explore the historical, cultural, and psychological forces that have helped to shape our 21st Century lives.”

The end of the pandemic will not mean the end of companies such as New Normal Rep, says its executive producer, Sally Klingenstein-Martell.

Jericho is streaming on demand through April 4 at NewNormalRep.org. Tickets are $25, as well as $10 for students and theater professionals. Purchase tickets and find information about the company and its inaugural season by visiting NewNormalRep.org. To watch a trailer, visit https://www.youtube.com/watch?v=Ptx02RG75LM.