An Evening of Britten and Purcell 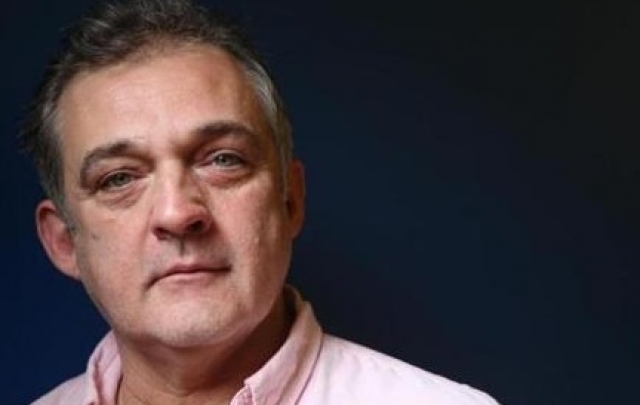 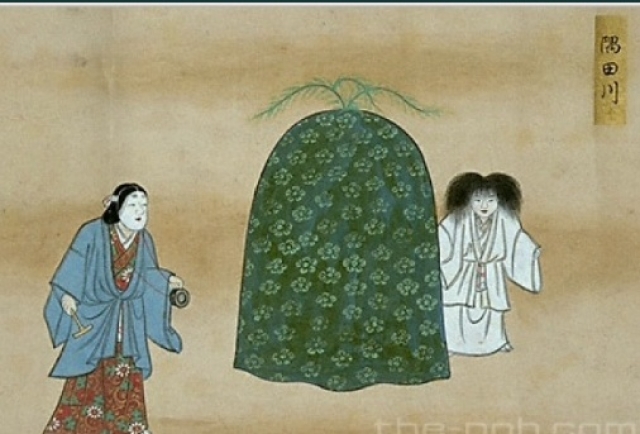 A Mad Woman looks for her lost son in a Noh drams Surida River on which Benjamin Britten's opera is based. 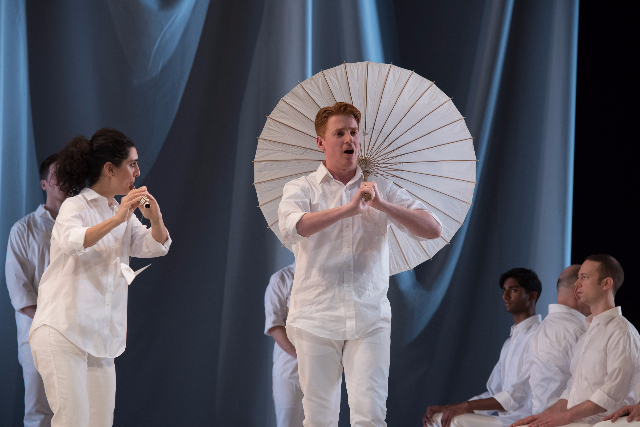 Curlew River. Tenor Isaiah Bell flicks his umbrella in a protective gesture. Often the on-stage instruments play, one at a time, as he sings in a beautiful Britten musical line. 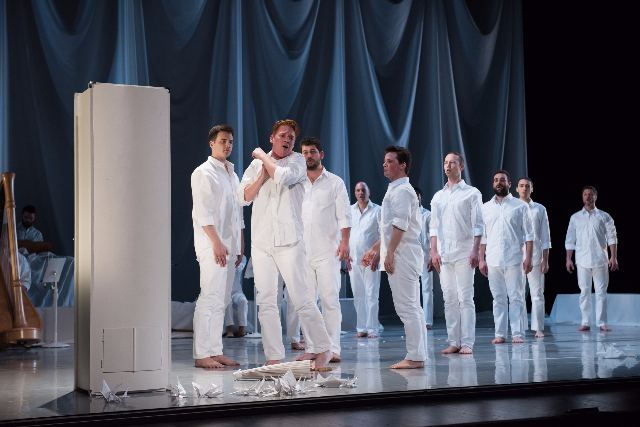 Curlew River. Set designer Allen Moyer features a light white, which includes origami cranes. Because the opera is set in a monastery, the cast is all male. 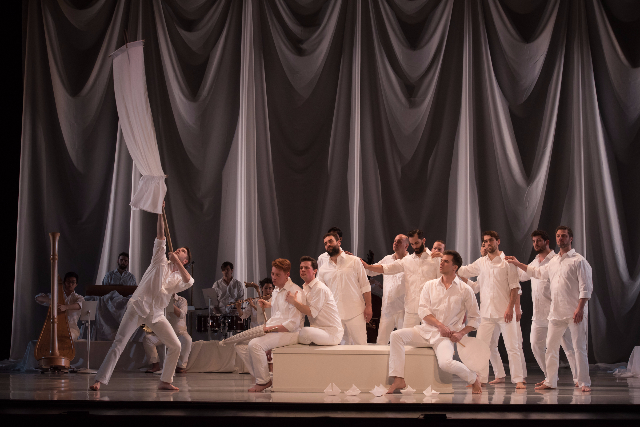 Curlew River, the wind in the sail. A ferryman sung beautifully by Douglas Williams, consents to take the Mad Woman across the river. 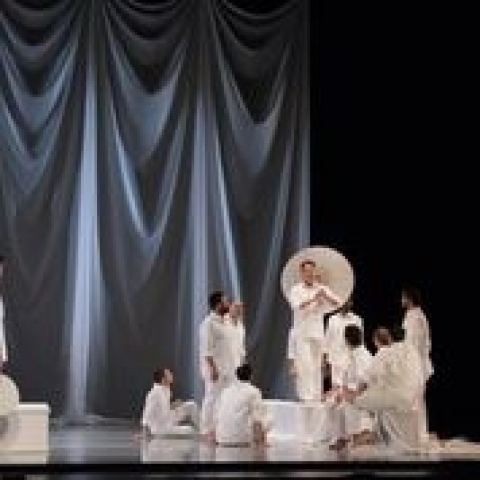 Curlew River. The chorus or medieval choir sits by the river as the Mad Mother makes her plea. This work is not directed, and singers try to land together on the final note. When they don't, the irregularity has an odd power. 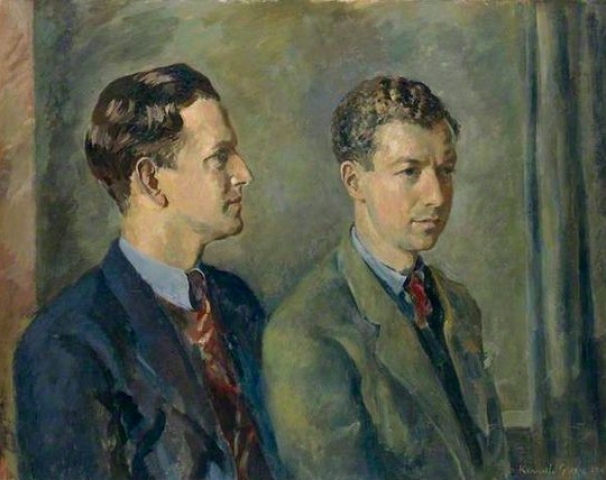 Peter Pears sang the role of the mad women in the original performances of Curlew River, portrayed here with the composer. 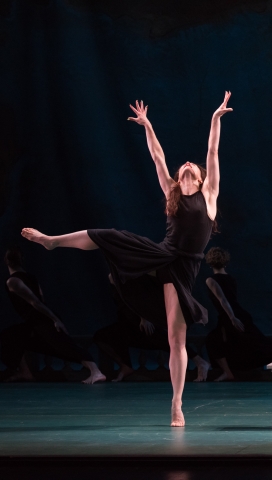 Dido and Aeneas. Mark Morris has a wonderful sense of the visual accompaniment to music. 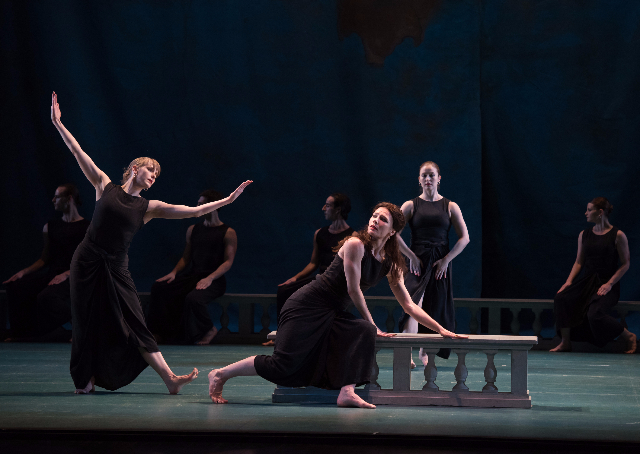 Dido and Aeneas is part of the story of The Trojans. A sorceress warns of the danger of romance with Aeneas, who is scheduled to found Rome and can't say in Carthage. 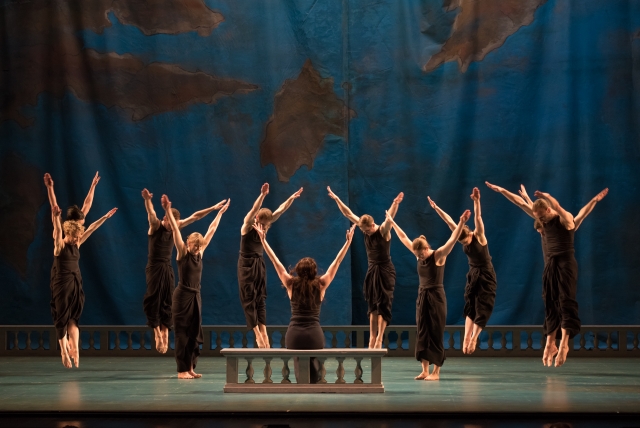 Dido and Aeneas Robert Bordo designed the set. The backdrop suggests Carthage and Rome sticking out into the Mediterranean Sea. 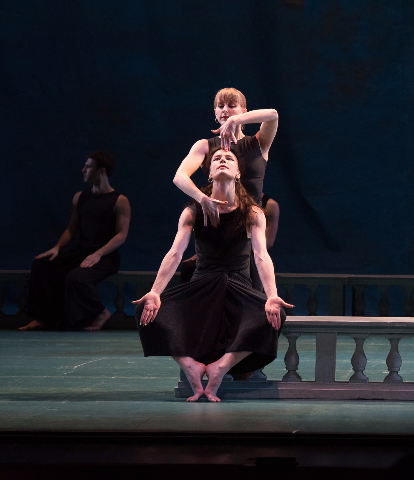 Dido and Aeneas In Mark Morris' choreography, hands gestures are as entertaining and revelatory as body ones. 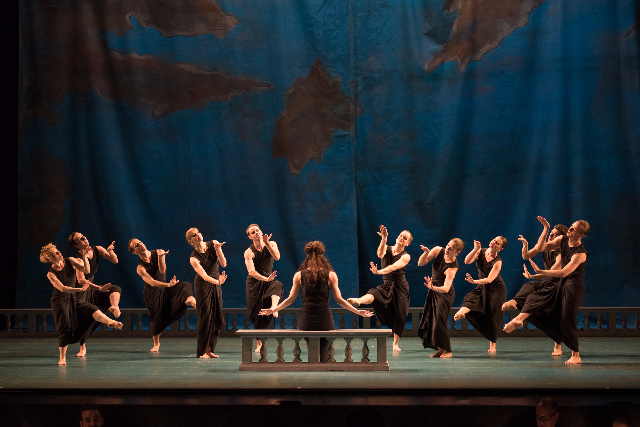 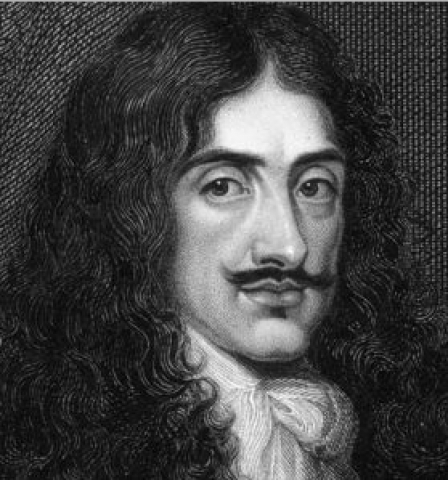 Charles II reigned when Purcell wrote Dido and Aeneas. Dancers would have performed before him. 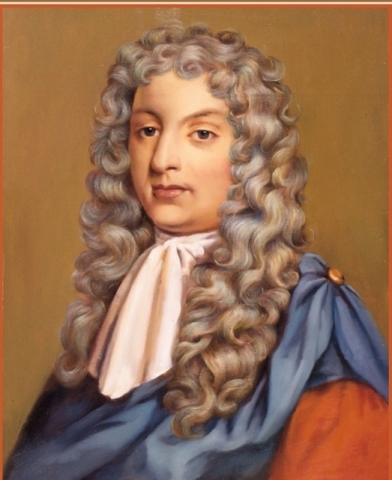 Henry Purcell composed Dido and Aeneas. H was a master dramatist and the soloists and Mark Morris Dance Group capture his spirit.

Last summer, Lincoln Center staged Noh plays from Japan. One of the most important was Sumida River, the story of a mother driven mad by the death of her son. It is this play that Benjamin Britten wove into his Curlew River, bracketing it with mysterious Medieval church liturgy.

Britten did not think opera audiences could take their Noh straight, and set the drama in a monastery, preparing for the all male cast and the plainchants that begin and end the piece.  There is no direction.  Singers in a group try to land on the end note at the same time.

Most of the music is horizontal, the same song being sung by different voices at different times and landing where it will.  The composer describes the effect as "controlled floating."

Morris admits that he initially found the opera deadly dull. In re-imaging it, he presents a world of white; a white backdrop, white costumes, white slippers for the all male cast.   Choosing tenor Isaiah Bell of exceptionally pure voice (and red hair!) to sing the mad woman was a stroke of genius when this work was first performed at Tanglewood in 2013. Bell reprises the role at BAM.

The combination of lighting, sets and the on stage musicians, expanded from the flute and two drums of the Noh to include horn, double bass, viola and organ, is mesmerizing.  It gives the work perhaps more power than the original Noh, which had drawn in the composer and tenor in Japan.

Stephanie Blythe in the pit!  She seemed comfortable there, that gorgeous voice rolling out over the orchestra seats and up into the balconies above. Because a lead character was ill in a recent production at the LA opera, and because the staging was complex, the cover singer sang from the pit, while the voiceless lead enacted the role on stage. This seemed a good solution to a big problem.

What Mark Morris is doing, in staging Henry Purcell’s Dido and Aeneas, is to enliven and make present one of the first operas Henry Purcell wrote. There was no public opera in England at the time, so it was first performed at a girls’ school in Chelsea, England.  Morris has made the opera perhaps too saucy for young girls, but not for the audience, which was rapt in his staging.

This work achieves a high degree of dramatic intensity within a narrow framework. Dance is a perfect way to tell the story with Purcell's music and the sung roles lofting up from the pit.  If this had been danced in Purcell's time it would have been at the court of Charles II, whose first descendant to ascend the throne will be Prince William, through his mother the Princess Diana, back to Charles' illegitimate son via Charles Lennox, 1st Duke of Richmond

Needless to say, the hip, cool, highly musical Mark Morris does not do begats. That is his salvation. He takes a work of art, and honoring it fully, brings it in to the present. The dance of his troops, led by Laurel Lynch as Dido and Domingo Estrada Jr. as Aeneas, captured the Carthage landscape, rough and ragged and wracked with passion and pain.

Sex is something Morris does not shy away from and its texture heightens the music and gives the story purpose.

Also in the pit were the Mark Morris Music Ensemble and the chorus. You could see their bobbing heads, like the Robert LePage’s recent chorus placement “under the boards” in L’Amour de Loin.

Gesture is all important to Morris, and the hand postures recalled the origami cranes of the first opera. Dancers dipped at the knees to make sexual parts more accessible.  Wonderful waving torsos are among the pleasures on stage.

Morris suggests so many ways in which opera can be made live and feel contemporary.  BAM has shown us two paths which entertained in the beauty of their music and images.  Morris is of course Brooklyn's own and we are delighted to share.