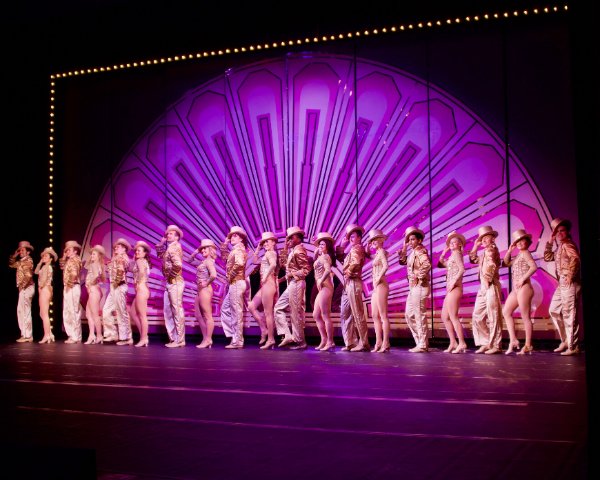 Photo by Amy Pasquantonio Cast members appear in an iconic scene from the musical. 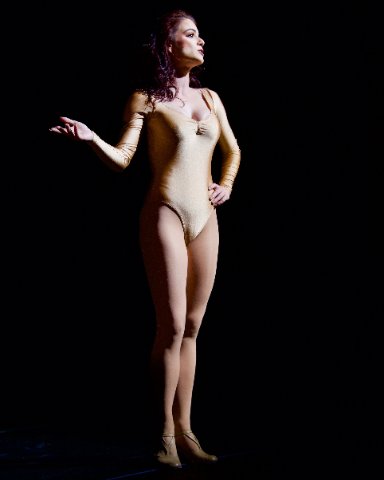 Photo by Amy Pasquantonio Sheila (Emily Tarallo) owns the stage during the audition. 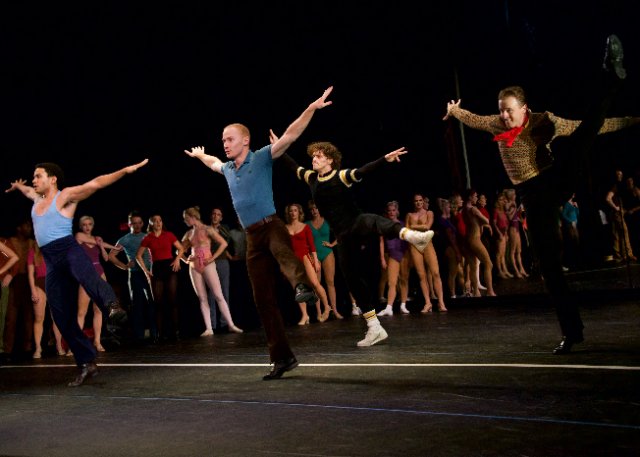 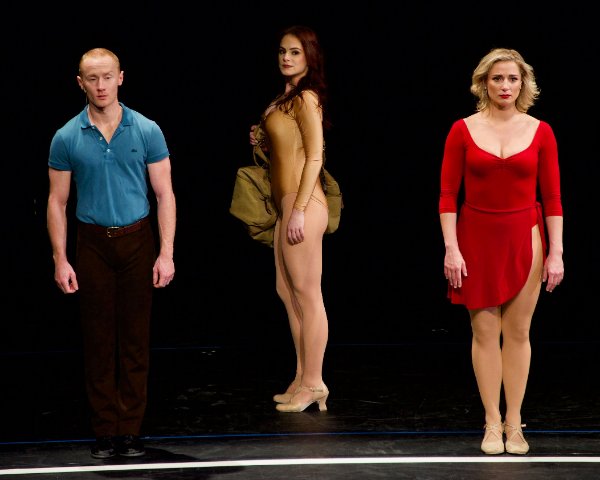 Hopefully, sooner rather than later, Coronavirus will disappear.

Then, the media may choose to highlight "unsung heroes” in the battle against the virus.

Specifically, these are people who, as part of their jobs, had to potentially expose themselves to the bug in order to protect the public’s health.

However, these folks might not desire accolades. In fact, they may choose to remain anonymous. And even while they decline interview requests, they might proudly proclaim: I love my job, which I gladly perform with all of my heart and soul. I desire no recognition. Rather, I do my job out of love for my fellow human beings and my country.

Meanwhile, show business also has its “unsung heroes." These people also don’t necessarily crave the spotlight. And maybe, more often than not, it doesn’t shine upon them. Rather, they blend into a unified, well-oiled ensemble. Perhaps they are visible to audiences, perhaps not.

Still, their work is no less important to a production's success than a show’s “stars.”

These “gypsy” dancers toil in the trenches. No doubt, they pour blood, sweat and tears into their work. They do so all in service of making a show as good as it can be.

Now, when theater companies have had to cancel or postpone shows due to the virus, it’s an apropos time to think about chorus dancers.

Certainly, a deftly-executed production of A Chorus Line during this time can help audiences appreciate that behind the glitz and glamour, dancing can be as grueling as a high-intensity workout at a gym with demanding trainers.

During the opening weekend of The Wick Theatre’s first-rate production of A Chorus Line, audience members witnessed how passionately ensemble dancers feel about their job. This production likely made them realize how tough a chorus dancer's work can be. Indeed, at least one cast member sweated as he performed the show’s high-octane, cardio workout.

Unfortunately, due to the virus outbreak, The Wick Theatre has had to postpone the remainder of the production until at least April 23. But the downtime at the Wick should allow awareness to fully sink in about ensemble dancers' commitment. They literally and figuratively put themselves “on the line” to help perfect a production.

Come to think of it, A Chorus Line is like the hard-working, committed dancers that it portrays.

Save the final iconic, glamorous scene featuring the show-stopping “One,” the musical isn’t flashy. Moreover, it may not stand out in a theater company’s season line-up of splashy, extravagant musicals. Even so, the 44-year-old Tony-winning, Pulitzer Prize-winning musical, however quietly and perhaps without much fanfare, excels at putting human faces on those oft-invisible dancers who appear in splashy, popular shows.

Truly, in effective productions, they work as “One Singular Sensation” to bring you the visible extravagance that so many theatergoers desire.

But if chorus dancers don’t often receive their due credit, audience members during the reviewed performance of The Wick's production showered them with well-deserved, deafening and sustained applause.

These cast members, some New York-based, dance with vigor while making each challenging, acrobatic move seem as natural as breathing.

The dancing is particularly tricky in this show. That’s partly because performers must not only demonstrate their dancing prowess, but “mess up” just enough to justify criticism from their director and choreographer, Zach. He barks it out during the musical’s setting of 1970s New York City. The show transports us to a bare Broadway stage during the third and final callback audition for an unnamed Broadway musical.

The stakes for these desperate characters are particularly high, resulting in heavy dramatic tension. It is manifested in tense songs such as “I Hope I Get It” as well as lyrics that take us into their mind as they nervously await their fate. Will they get the part? Does the director like them? As Zach methodically whittles the number of auditionees down, the tension palpably grows.

The cast members are triple threats. In addition to their dancing skills, they possess strong, expressive and rangy voices. They’re not just belting out the show’s powerhouse and memorable songs, they’re credibly acting out the intense, varied emotions behind the lyrics.

Sophia Swannell lends sass, seduction and shamelessness to Val. She is a potty-mouthed dancer whose looks prevented her from landing performing jobs. That is, until she underwent plastic surgery.

Listening to Swannell, you’d swear she was playing a character from Chicago as she sensually sings lyrics such as “tits” and “ass” from the infamous, R-rated number “Dance 10, Looks 3.”

Jessica Lee Goldyn, as Cassie, argues vociferously and convincingly with her old flame. Also, the performer endows her character with an assertiveness that will please many in this #MeToo era. At the same time, Cassie and Zach (an excellent Tom Berklund) convince us that they once harbored loving, sincere feelings for each other.

But Goldyn's strongest moments come during the tour-de-force number, “The Music and the Mirror.”

During this song, the character sings about her desire, her need to dance. She moves as freely as a swan for a prolonged period, desperately trying to convince Zach to accept her as a chorus dancer.

Many performers desire a leading role. But not Cassie. She’s experienced success as a featured performer, but simply wants to fit in as a member of the chorus – much to Zach’s disapproval. Surely, she’s too advanced for this, he essentially argues. However, Cassie won’t back down.

Diana isn’t a pushover, either. But she’s also funny, charming and vulnerable. This becomes apparent during her solo, “Nothing,” during which she sings about her experiences at an acting class.

Laura Plyler convincingly brings Diana’s personality to life with her expressive eyes, eyebrows and voice. They also work to her advantage as she sings, along with the rest of the company, “What I Did For Love.” The characters sing it in response to a question from Zach. Specifically, he wants to know what they would do if suddenly, they had to quit dancing. The song comes after one of the dancers suffers a career-ending injury during the audition.

The unfortunate situation makes the characters realize that, just like an athlete, a dancer’s working life can be short and rough. Further, it’s not necessarily glamorous.

The male performers fare as well as their female counterparts.

For example, Austin Carroll injects Mike with cockiness and a self-assured demeanor. Yet, the performer endears his character to us. In particular, he makes us think back to our childhood. Perhaps, at the time, we witnessed a sibling doing something and we wanted to do it as well – if not better.

Carroll, with a playful swagger, sings “I Can Do That,” recalling how he wished to dance like his sister.

On the flip side of Mike and other assertive male characters, there’s Paul. He is reluctant to share his painful past. And when he does, he breaks down.

This is a challenging part; an actor must credibly portray nervousness and hesitancy while convincingly portraying the character. Of course, the performer also needs to make Paul’s emotional breakdown seem authentic. So, credit Jonathan Fleites with believably, and with nuance, playing all aspects of his character.

Sure, there are dark themes and topics covered in A Chorus Line. But there is comedy in the script as well.

Bobby is one of the comedic roles. And David Michael Bevis plays him with the right amount of flamboyance and wit. The character suffered through a painful childhood. However, unlike some of the other characters, Bobby is able to laugh at his past.

While Bobby is often joking, the casting process is no laughing matter to Zach.

To his credit, Tom Berklund avoids turning Zach into a jerk. Rather, he makes the character a driven, demanding stickler for detail. At times, Berklund’s Zach can come off as curt or harsh. But the performer also show us Zach’s softer, caring side. This is particularly true when the director/choreographer comforts an emotionally-overcome Paul.

Several musicals, including Oklahoma, Showboat, West Side Story and Hamilton have proven to be groundbreaking in musical theater. Unquestionably, A Chorus Line, a “concept musical,” or one more concerned with conveying a theme or message than emphasizing a narrative plot, fits into this category.

It was the first Broadway musical to explore the inner stories of Broadway’s “gypsies.” They are dancers who move from show to show without fanfare. This show, based on a real-life interview in 1974 with Broadway dancers, features a bare stage. The exceptions are upstage mirrors and the literal as well as symbolic chorus line.

The show is supposed to run without an intermission. So, it’s curious as to why the Wick’s production includes one. It slows the dramatic momentum.

But otherwise, the Wick Theatre has done itself proud.

At the beginning of the show, these characters essentially have no identity. At first, Zach even calls them by their number. This reinforces chorus dancers’ anonymity. Even so, their costumes, designed with detail by Keith Nielsen, somewhat define them.

As the show progresses, the characters, per Zach's request, begin to talk about their backgrounds, desires and fears. Zach wants to know these people as individuals and why dance is important to them. Eventually, they become characters with whom we can identify. But toward the end, by their own choosing, they revert back into obscurity. They remain content with dancing in the background in order to make a show and its stars great.

Mitzi Hamilton, the inspiration behind the character of Val, fluidly directs the production and creates interesting stage pictures.

While the characters are obscure in the beginning, Hamilton ensures that not only their costumes, but their postures, reveal something about them.

They may differ in personality, but they’re united as "One" by the end.

Ultimately, A Chorus Line is about sacrificing your desire for individual glory and working selflessly and tirelessly as a team to achieve overall greatness.

It’s a sacrifice to which many should be able to relate, regardless of their occupation.

That is particularly true during these trying times.

The Wick Theatre has postponed the remaining performance dates of A Chorus Line until at least April 23. For updates and more information, log onto thewick.org, or call  (561) 995-2333.