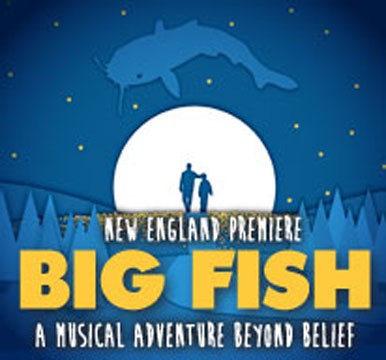 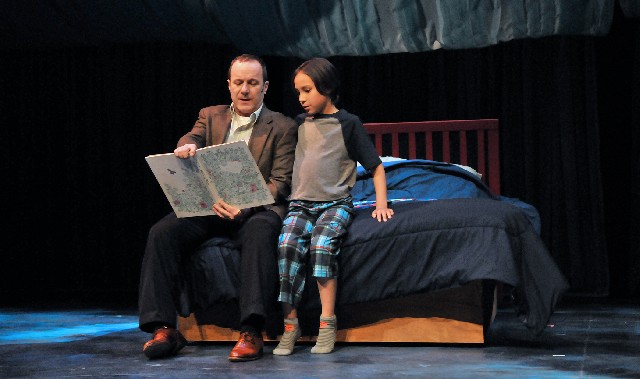 Edward and Young Will Reading A Story. 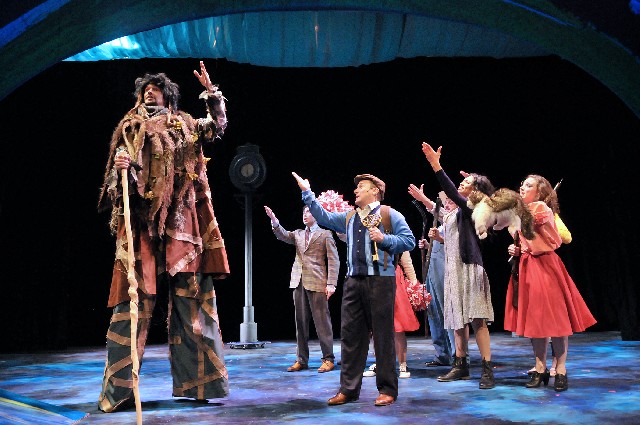 Giant Karl and Edward with the Citizens of Ashton. 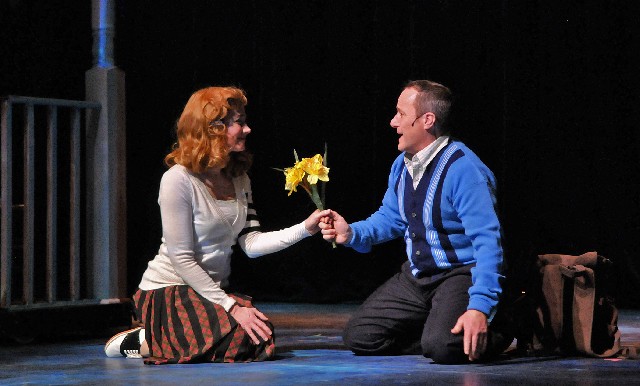 Sandra and Edward with daffodils 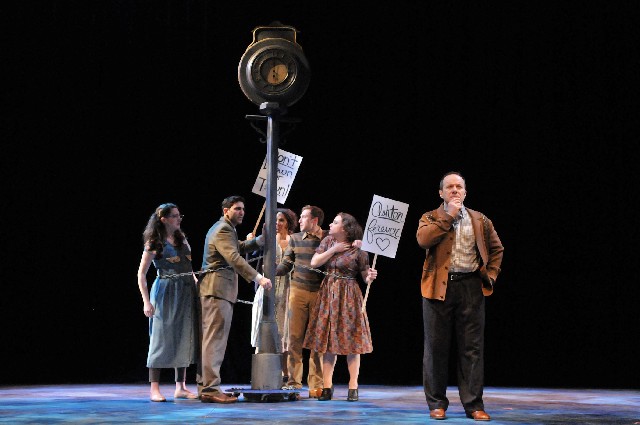 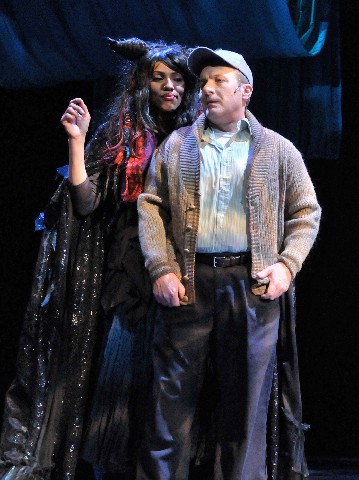 A Young Edward and the Witch

Big Fish began as a book morphed into a Tim Burton 2003 film and eventually landed as a mixed reviewed and fairly short lived 2013 Broadway production. It has now been formulated into SpeakEasy Stage's brilliant production, a compelling hybrid of picaresque narrative and vibrant musical.

Here the recipe for entertainment has ingredients of Ulysses as well as The Music Man and even a small morsel of The Wizard of Oz. Like these other stories, characters and events are often symbolic and quite real. The name Bloom is a cleverly borrowed ingredient from James Joyce's opus. This Big Fish is a theatrical feast seasoned by beautiful melodies and spiced by terrific performances.

In the tradition of many Southerners (the show is set in Alabama), the show's main character Edward Bloom is a storyteller. Everyone loves his larger than life accounts of  adventures except for his overly practical son Will. Edward's first story sets the play's tone. His tall tale is about the whopper his son caught after he taught a very young Will how to fish.â€¨ Throughout the narrative, Will's dilemma is trying to figure out whether or not Edward’s endless stories are actually true and why he used his tales to cover up his real self.â€¨

It is easy to describe Big Fish in complimentary ways. It's New England premiere efficiently pairs down the large cast of the original Broadway musical that had over thirty roles to just 13. But diminishing its size has made this production writ large, bold and bright. The talented cast  performing the roles is simply terrific. The music is embracing, wrapping the audience in the ebb and flow of the narrative with performances and voices that are superb.

The leading players in the show were wonderful. Aimee Doherty as Sandra Bloom, Will McGarrahan as Amos Calloway/Dr. Bennett and Sara Schoch as Jenny Hill made the narrative flow. Special mention of Lee David Skunes as the surprisingly funny and articulate Karl the Giant should be made. He was a towering figure of substance.

Aubin Wise portrayed the Witch as a magical creature. Sam Simahk beautifully voiced Will Bloom. However, far and away, Steven Goldstein as Edward Bloom gave a star-turn. He inhabited his role with a warm believability, a strong voice and great charm.

Truly gifted with musicals, SpeakEasy Stage Company's Artistic Director Paul Daigneault hits every mark correctly. His direction is orchestrated dynamism and lovely characterizations. Previous musicals by Mr. Daigneault have, like this production, also been nothing less than superb. Matthew Stern's musical direction and Larry Sousa's choreography underscored and amplified this outstanding theatrical experience. The show's music and lyrics by Andrew Lippa are simply lovely and poetic.

Big Fish is enhanced by wonderful stagecraft. The setting designed by Jenna McFarland Lord and Karen Perlow's lighting work wonderfully together. Of special note is Elisabetta Polito's costume design that add to the fantasy and even magic of the production. Her dancing witch costumes and Karl the Giant's various outfits were stunningly conceived. Adding visually and symbolically, Seághan McKay's projection design was spectacular. After seeing Big Fish, daffodils can never again be thought about the same way.

Artistic Director Paul Daigneault sensationally demonstrates with Big Fish theatrical storytelling at its best. A show for the whole family, it is a thoroughly delightful entertaining experience. Bravo.