White Blacks: The Saga of an American Family 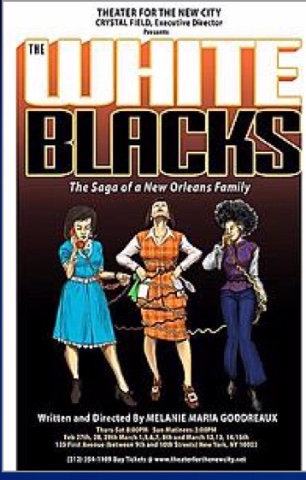 White Blacks at Theater for the New City

We begin as the guests at a black debutante ball in New Orleans. White staircase, be-gowned young women, stiffly poised young-men stand on the threshold of their presentation to society. We see the painstaking bows and curtseys of a society steeped in the mores of color and class that are expressions of the history of New Orleans.

They are ceremoniously introduced by Messers Duponte and White (Albert Elias and Dan Kelley). The set design, costumes and props by Marina DeCicco, Lytza Colon and Sarah Jane Mumford subtly convey the overlap of time, mores and social identities of Goodreaux 's vision. The cultural setting reflects the writer's experience. Her approach has the blunt bitter-sweetness of family. As the story tumbles out, we are drawn in.

Goodreaux jettisons us into the junction of historical and present realities. It is 1976. The social lynchpins of New Orleans Creole society are losing their meaning. The age old security of status rooted in class, color, religion and rituals is dissolving in the face of changing norms.

The setting is a family reunion celebrating the 75th birthday of Mamair Rochon (Renee McNeil), the matriarch of a far flung Creole family. She is the glue that holds the family together. In speaking with the portrait of her deceased husband, George (Albert Elias) she is reassured that despite all, the family remains a respectable and cohesive unit. They are a proud raucous Creole, family in which each character is etched to emphasize individuality.

Yet Mamair's children and grand children have all fled the constrictions of the house that their grandparents filled with photographs, crucifixes and chandeliers. Two of Mamair's daughters, Delores (Christine Stone Stottard) and Saydee (Frances S. Sure) have left New Orleans. Her niece Cousin Velma (Marsha-Ann Hay) and Delores both have married white men and cut themselves off from the family.  They do not acknowledge  black roots to their children. They are the passe blancs. As the guests arrive at the birthday party, their absence is palpable.

In a 2020 audience, I found the need to remember that interracial marriage was illegal in Louisiana until the Supreme Court decision of 1967.  Disparity of wages was legal and unchallenged until 1964.  Within the context of the Jim Crow south, the choices of the story unfold. With the patina of superiority, Creole families carried more racially mixed traditions of race/class relations rooted in the state's French history.

A large family, in whatever social context, serves up a surprising array of personal life styles, choices and journeys. Everyone wants to come home, to be acknowledged in the place where it all began.

As friends, long-time neighbors, siblings, and cousins meet to celebrate. They are judged and judge within the context of Mamair Rochon's life. McNeil is biting yet sympathetic as the grandma. As in most families, 'where we are today' is not entirely comprehensible to grandparents, distant cousins and childhood acquaintances.

The Black American, non-Creole, neighbors, Mr. and Mrs. Barnes (Anthony Harper and Linda Green) bring a plate of chitlin's which the more "sophisticated" Creoles look down on. The rebellious young cousin,  Marie (Hollie Harper),  makes her commitment to 'blackness' wearing a dashiki.  Her vegetarian gumbo vies for acceptance with the  shrimp gumbo prepared by her traditional sister, Alva (Kristina King). Their men reflect the gulf between the two women. Jimmy (Marcos Palma) is a high-school grad, hardworking church-going, light-skinned Creole man. He is well liked by Mamair. The dark Afro-centic Baraka Akuchi Ali (Stacey A. Griffin) is a physicist, whose scientific and social views reject of the values that hold the Rochons together.

Cousin Pancho, (Thomas Vorsteg), a gay young man has arrived with his white partner Billie, ( Alex Yuille). He hopes to accept all, and be accepted. Shyla Idris gives a touching performance as the developmentally delayed Evelyn, the only one of Mamair's daughters who is still at home. She is well loved by all. Even she refuses to attend the cotillion. Her beau, Red Lionel (Johnathan Duran) is Creole and Catholic. He has the less than “respectable” profession of oyster fisherman.

As in every family, the recollections of the past do not always bring people closer. The remembered rejection of the Barnes daughter, Louise, (Linda Greene) by the Rochon girls as they acquire had their passe' blanc identities, is bitter.

The adolescent Rochelle (India Stachyra), daughter of the long lost Dolores, makes her sudden and unexpected appearance, as does the passe' blanc Cousin Velma. Can these two women comfortably come “home?" As the catalyst for the confrontation of old and new, Hay as Cousin Velma gracefully holds center stage.

Within this dense and complex family, Goodreuax delivers a sharp outline of the social conflicts of a changing world. Yet she is remarkably able to carefully define the protagonists. As a director she has gives life to the uniqueness of each role. A house full of characters dance before us, often uproariously humorous. White/ Blacks serves up tasty theater.