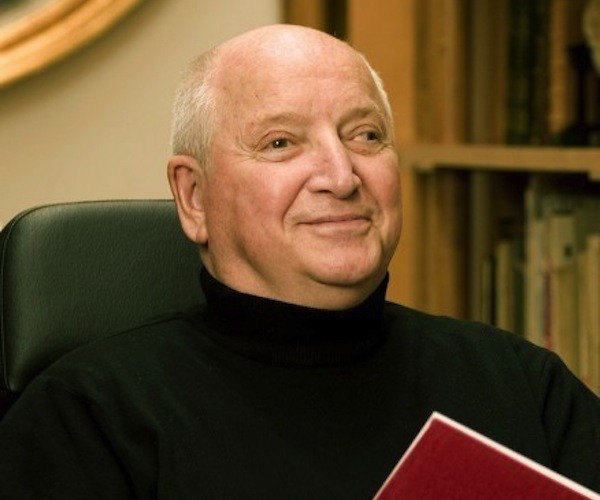 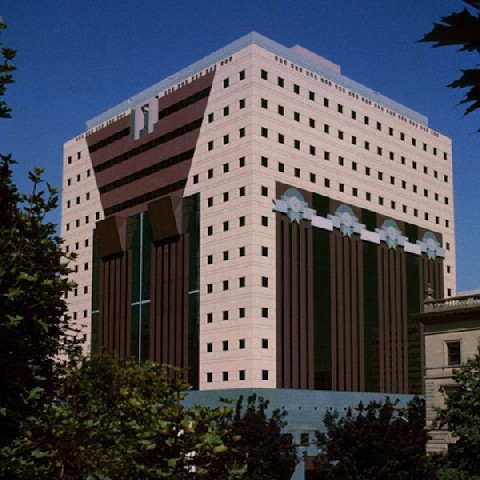 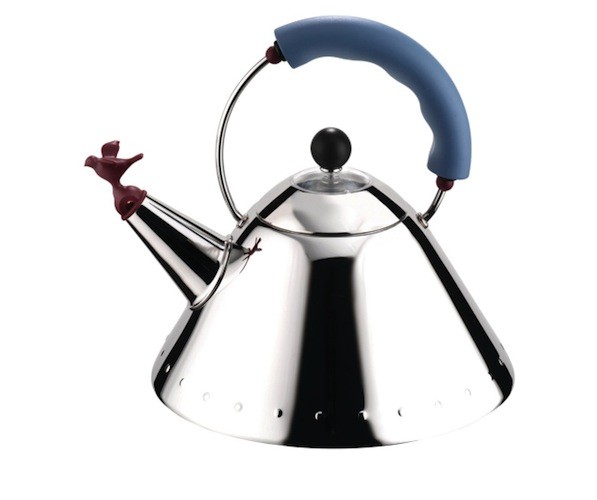 Iconic Bird Whistle Tea Kettle by Michael Graves for Alessi (1985). Over 2.5 million have been sold. Graves was upset the lousy contract he made with the Italian designer product company. 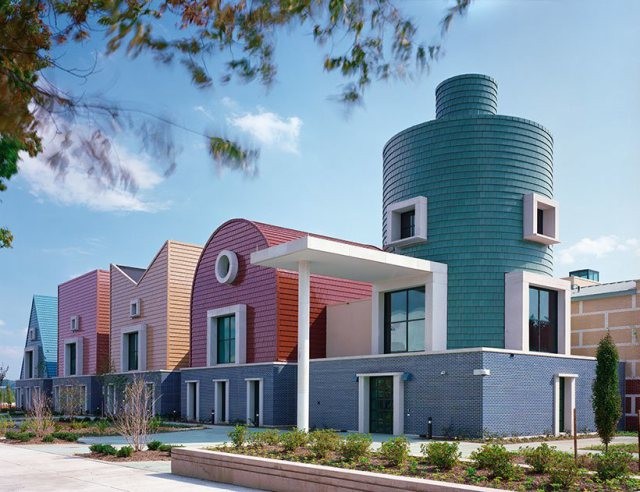 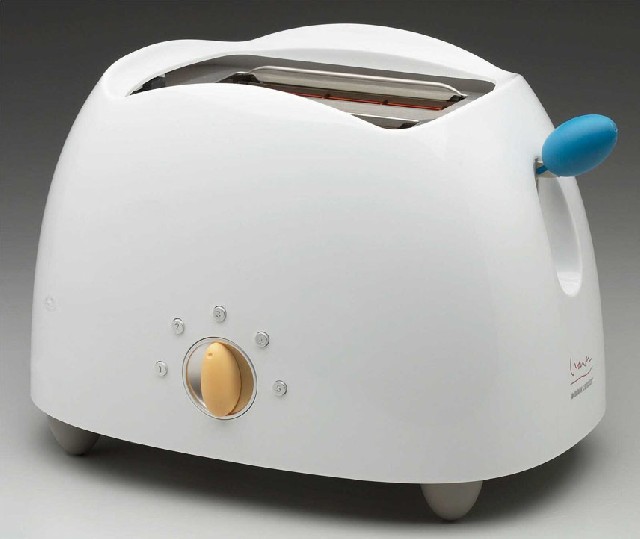 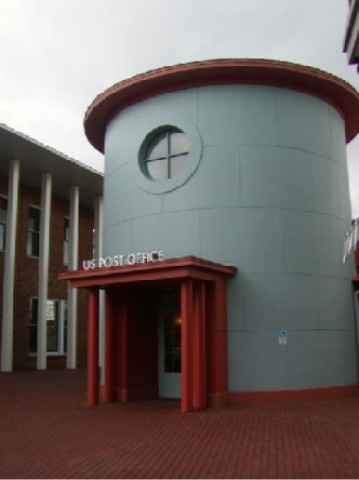 Postmodernist architect and designer Michael Graves died on March 12 at the age 80. He took pride in being a Midwesterner from Indianapolis. As an undergraduate, he studied at the cooperative (work/study) architecture program at the University of Cincinnati. Graves often said that the Cincinnati experience gave him the knowledge and skill to make buildings stand and not leak.

He attended the Graduate School of Design at Harvard and received his Master of Architecture in 1959. After that he moved on to New York; for the next year or so he worked for the now iconic George Nelson firm, focusing on factories for the Herman Miller Furniture Company. Ironically, Nelson also designed furniture, clocks and lighting as well as architecture, yet Graves never acknowledged his influence. Graves then went on to win the Rome Prize. And it was in Rome that Graves claims to have become really educated. For the next two years he studied the Renaissance masters, talking to art historians and artists rather than architects.

In Italy, Graves was particularly taken with the work of Francesco Borromini, and he drew and painted 30 x 40″ black ink sketches and washes of the 17th Century master’s buildings. Borromini’s Baroque ornamentation influenced Graves’ future work. When he sold these drawings and paintings (for $50 a piece), Graves used the money to take his Grand Tour of the ancient sites around the Mediterranean, including ancient and significant Greek and Roman structures and buildings.

His vision and design was also influenced by the souvenir reproductions of the objects 19th Century travelers purchased on their Grand Tours. These pieces later informed his design approach to architecture as well as to consumer products. Returning to the states in 1964, he was offered an architectural teaching position at Princeton University. He taught there 40 years and became a Professor Emeritus at Princeton. While at Princeton, Graves also practiced architecture there and in New York City.

Graves’ first major architectural recognition came from his being part of The New York Five, along with Richard Meier, Peter Eisenman, Charles Gwathmey and John Hejduk. Their work appeared (mostly unbuilt projects and family member homes) in a 1967 Museum of Modern Art exhibit and in a subsequent book, 1972′s Five Architects. Architect Philip Johnson was the group’s influential mentor. Though their work seemed to hew close to pure Modernism, it also drew on a number of social ideas and academic philosophies.

In the ’70s and ’80s Graves became known for designing Postmodernist buildings, structures that made use of ornamentation in dramatic ways. His Portland City Services Building (1982) is considered a major example of the Postmodern style. Several other of Graves’ buildings, including Humana’s Headquarters in Louisville, Kentucky (1985) and various buildings for Disney in Florida (1987-92) are also prime examples of his distinctively theatrical and/or decorative approach, which has now become somewhat dated.

Graves was asked to design for the elegant Italian home appliance and kitchen toolmaker Alessi. Initially, the pieces were high-end objects that were included in museum exhibits that circulated around the United States and Japan to publicize Alessi as a brand. Graves regretted the lousy deal that he signed for the design of his rather wonderful and iconic Alessi bird whistle tea kettle (1985). Apparently well over 2 million of them have been sold, but Graves only received 1.5% of each sale. The contract was never renegotiated.

Graves’ firm worked on the spectacular scaffolding for the renovation and repair of the Washington Monument, a construction project sponsored by Target. The retailer, who has historically been much more about good design than competitors such as Walmart and K-Mart, then asked him to become involved with their home products. Graves recalled that Target executives told him that the retail giant had been ripping off his designs for years anyway, so why not just have his firm create the products in the first place?

Graves followed in the earlier tradition of the German Bauhaus and the much later French designer Philip Starck; he wanted to bring well-designed home products and furnishings to the masses. In terms of the latter goal, Graves’ collaboration with Target succeeded spectacularly, even when faced with the challenges of limited additions and having to change products yearly and even seasonally. He brought a sense of whimsy and delight to home and kitchen products. Creating stylish products for the millions may be Graves’ greatest design legacy, far outliving his architecture.

Influenced by painting, Graves greatly admired Camille Corot and Giorgio Morandi along with the Old Masters. He painted landscapes himself. Artist Morandi’s paintings influenced Graves’ color choices for much of his architectural projects.

Over the years, Graves’ firm, Michael Graves & Associates, completed a long list of commercial, institutional and residential buildings and structures. Interior design and even custom furniture have been part of his design firm’s work as well.

In 2003, an infection of unknown rather mysterious origin, possibly bacterial meningitis, left Graves paralyzed from the waist down. Even with this disability, he continued to work with his staff on a number of new and future architecture projects. A recent project was designing housing for The Wounded Warrior Home Project (2011) at Fort Belvoir, Virginia. No doubt because of his own disability, Graves was very interested in health care reform and accessible product design until the end of his life.

Graves made a strong — at times highly theatrical — stylistic contribution to 20th Century architecture. Given the enduring popularity of his many home products, he made an even stronger cultural impact in showing how good design could be made accessible and affordable.

Note: Much of this article was first published in Arts Fuse.