From an A to O No 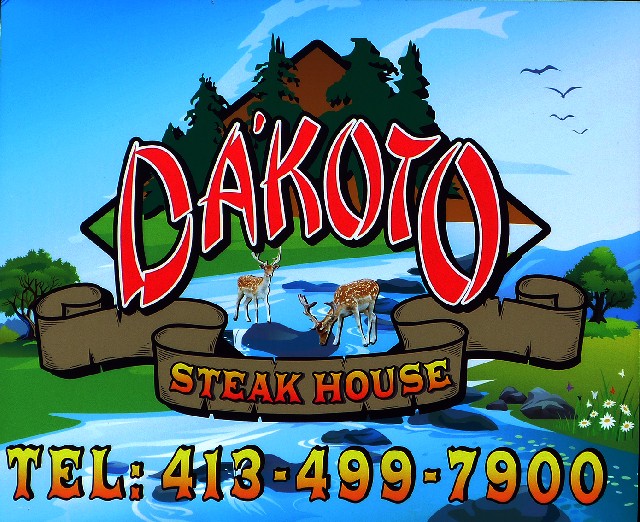 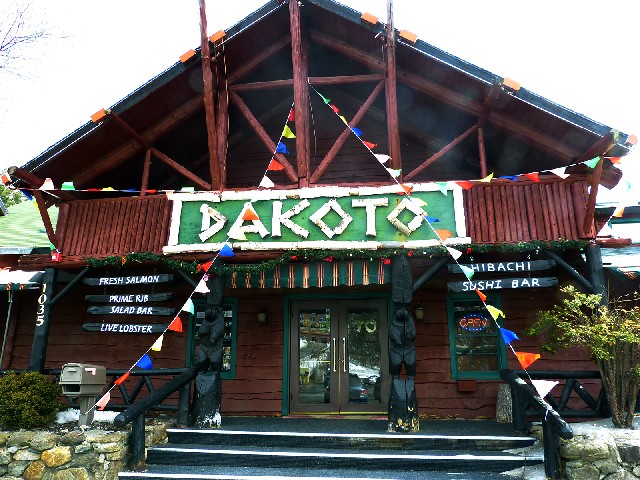 From the outside Dakoto still looks the same. 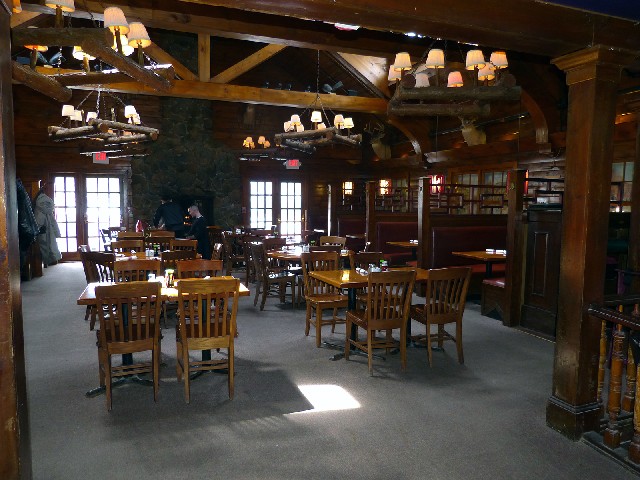 The main dining room with fireplace. 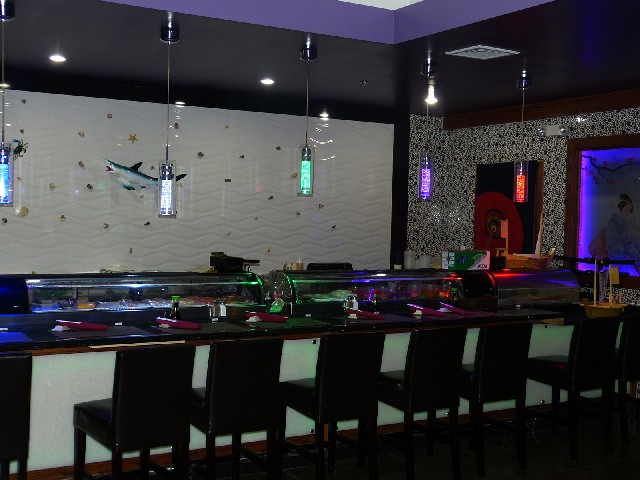 Sushi bar where the open grill was formerly located. 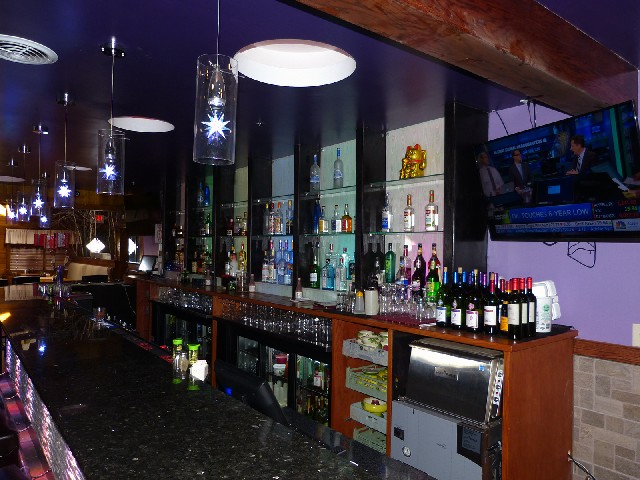 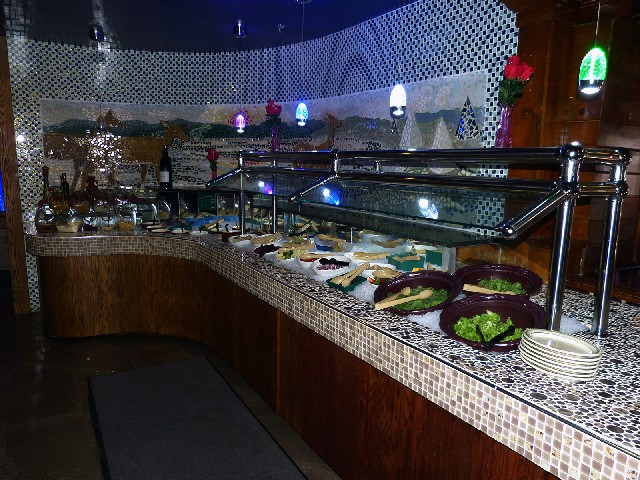 The salad bar in its original location. 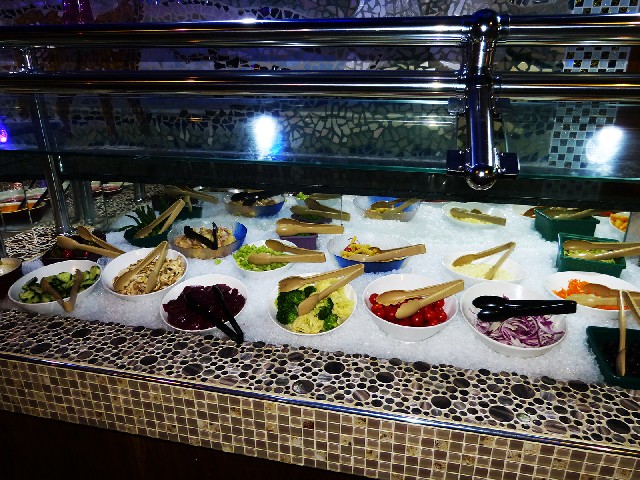 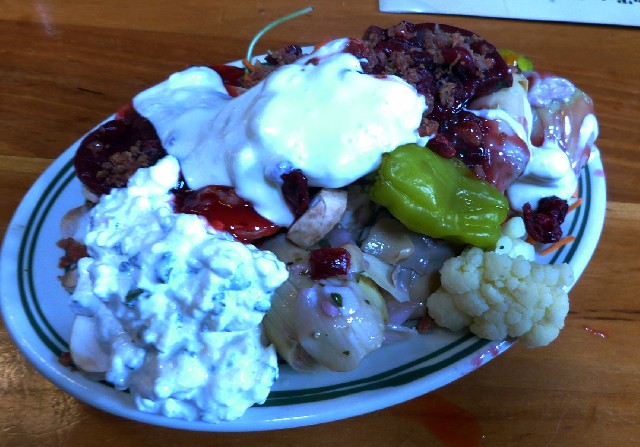 Trying to fill a small plate with salad proved to be challenging. 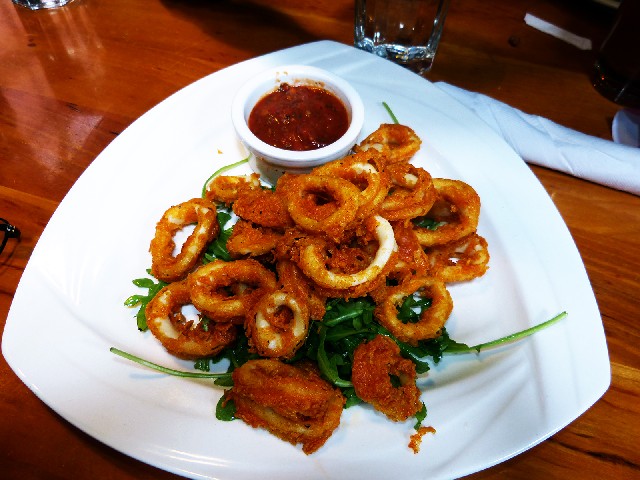 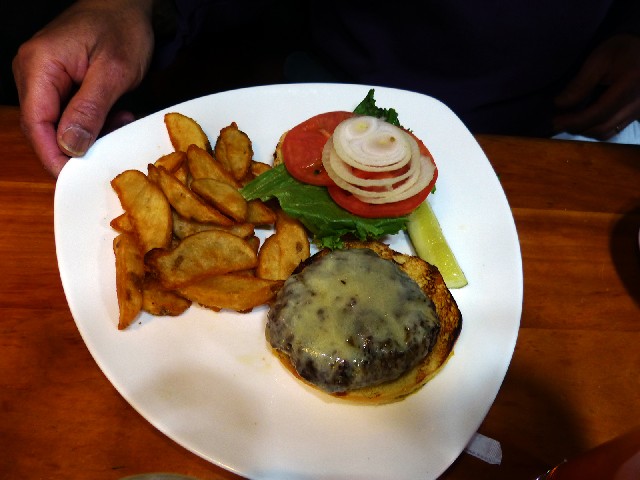 A cheeseburger with inadequate bun. 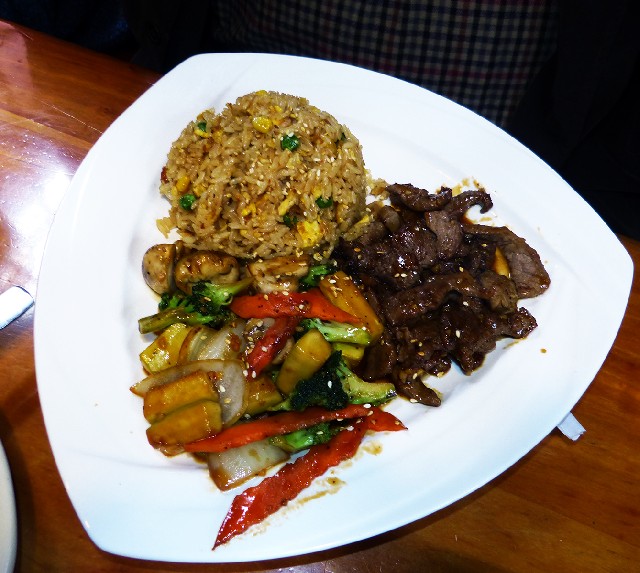 The former Dakota Steak House was a popular destination for Berkshire diners. It was somewhere between comfort food and fine dining.

Although pricey and in a slump, with an ever more rapid decline, there was a lot to like.

Everyone loved the basket of freshly baked warm bread with a molasses laced hearty flavor.

You could get a loaf to go.

The salad bar was first rate.

If you balked at paying mega bucks for a prime steak there were cheaper alternatives.

You still qualified for that great bread and a pass at the well stocked salad bar.

The trout was nice. As were the grilled pork chops.

There was a chorus of lament when the funky, rustic old Dakota closed last summer.

It was always mobbed on summer weekends.

Soon there were reports that it would reopen as Dakoto a Japanese themed steak house with hibachi tables and sushi.

Apparently there were extensive renovations.

The Pit Bulls decided to check out lunch which comes in smaller portions but are less than half the price of the dinner menu in the $20 to $30 range.

With a glass of water and tip you could enjoy the lunch  atmosphere for about $15 each.

Two problems here. First, the scaled back salad bar is not free even with dinner as was the case with the former incarnation. Secondly, the salad bar which was formerly one of the Best in the Berkshires now is but a shadow of its former self. And there's no fresh bread with lunch.

Entering the renovated space, for openers, we missed that mangy old stuffed bear. Apparently it was sold during the liquidation auction. Perhaps it is now adorning the living room of a local one percenter. Hopefully with a refreshing shampoo.

Now the impression is gleamingly spic and span. The configuration of the dining room looked similar. A back room has been installed for hibachi. What had been the visible grill fronted by those refrigerated aging steaks is now a sushi bar. As Pancho noted he's fussy about sushi and accordingly skeptical.

We got comfortable and settled in until they finally let the cat out of the cellar. They should have charged rent as we had lots to talk about with no rush. There seemed to be a shift change from our humorous and lively waiter to a cook who finally settled the bill.

Our friend Pedro as a new guest for Pit Bull evaluations was a bit reluctant to participate. He's a real nice guy and hates to put anyone down. Even when providing a valued service for potential diners.

For $11.95 Pedro opted for an Asian fusion dish. That entailed some sliced steak in sauce with mixed vegetables and a healthy portion of rice. It came with a cup of clear broth soup. He tried the salad bar but said he wouldn't bother next time. "It's an American salad which is ok. I like American salad. But I was expecting an Asian one." Pressed for an opinion he offered that the meal was "OK." But liking the ambiance and company he would definitely return and try something else.

It seems Pancho and his sweetie pie had visted the new Dakoto for dinner a couple of times. He endorsed the prime rib and said that overall the meat was of good quality. Early on he was a fan of Dakota but his enthusiasm waned as the quality of the restaurant declined. On a mission to find the best burger in the Berkshires he opted for a cheeseburger with sharp cheddar. It is not an option on the dinner menu. With a bit of negotiation he managed a slice of raw onion with the lettuce and tomato. The burger was accompanied by what appeared to be hand cut steak fries.

While he described the meat as good quality, yet again, the bun was a disaster. It just fell apart as is all too common. "The bun has to stand up and is an important part of the experience." He holds to an opinion that the Best Burger in the Berkshires is served by Public in North Adams. The critical difference, of course, is in the hard, crispy, durable bun. You might say for Pancho "Been there bun that."

Cisco was tempted by the burger and grilled meat loaf was hard to pass up. He opted for fried calamari and a pass at the salad bar. The modest portion of fried rings was served over a bed of arugula with a marinara dipping sauce. The requested lemon was a small wedge that arrived mid meal. Why would one even have to ask?

For what there was at $9.95 the calamari was just fine. It was crispy, tender and fresh. Add another $2.95 for a very small plate of salad and that's more like a $13.00 lunch with no beverage, bread or side dish. The serving of calamari looked rather sparse and naked. Were it not for sampling a few of Pancho's fries Cisco would have gone home hungry.

With iced tea and tip the check divided evenly came to some $22 each. It just didn't seem that the New Dakoto translated into much bang for the buck. Don't go there if you're hungry. One must be willing to pay extra for side dishes.

Yes we will return for a chatty, leisurely lunch but not any time soon. As to a megabucks dinner we'll hold off till our ship comes in. Yet again lunch proves to be the best way to check out expensive, pretentious restaurants.