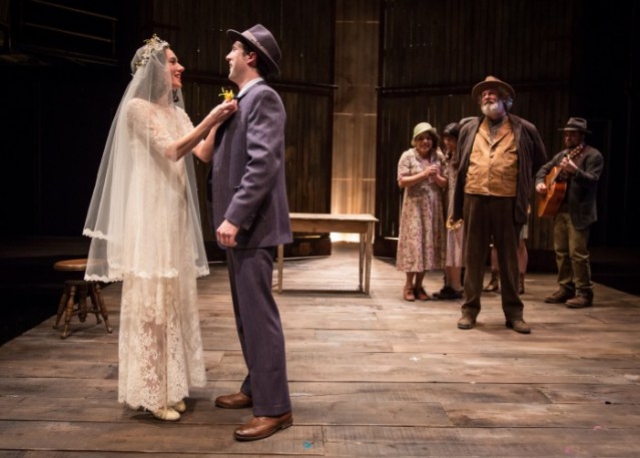 The Bride and Bridegroom. Photos by Liz Lauren.

Lookingglass Theatre’s new production of Blood Wedding by Federico Garcia Lorca, directed by Daniel Ostling, is set in the American Dust Bowl of the 1930s. Lorca’s simple and poetic language tells the story of conflicted love, deception and fate—all foreshadowed by the title. (Could a work titled Blood Wedding have a happy ending?)

The original setting for Lorca’s script is rural Spain and his characters include mysterious figures such as the Moon and Death. Ostling’s decision to set his production in the more-realistic Depression-era U.S. diminishes the mythic nature of Lorca’s story. The subdued presentation, quite different from Lookingglass’ usual physical dramas, does not redeem it.

The wedding tragedy comes about because Leonardo (Kareem Bandealy), although married and a father, is still in love with the Bride (Helen Sadler); the two had a relationship in the past. The Bride knows she should love and marry the sweet Bridegroom (Chance Bone) and the marriage is agreed to by the Bridegroom’s strong mother (Christine Mary Dunford) and the Bride’s father (Troy West). But the Bride’s longing for Leonardo brings about the blood in the wedding tragedy.

Memories of the past figure strongly in the story. The Bridegroom’s mother mourns the killing of her husband and her other son at the hands of Leonardo’s family. “On the forehead of all of them, I see only the hand with which they killed what was mine.”

The parental performances are the best among the cast, although Dunford’s voice was not strong enough to project when she performs with her back to the audience (seated on three sides of the thrust stage). The other performers are capable but not remarkable.

The two-hour play is divided into three acts (with two intermissions) and seven scenes. Original music composed by Rick Sims has a rootsy, slightly Latin feeling, but seems too upbeat for the story behind Lorca’s lyrics.

Ostling’s bare-bones stage design is suitable for the setting and story and the clapboard backdrop works for entrances and exits, which also happen throughout the theater. However, during the second intermission, an upright piano is rolled on stage, looped with ropes and hoisted up ominously above the stage. In the third act, of course, it crashes in darkness. But why? That was only one of the minor mysteries of Ostling’s interpretation of Lorca’s story.

Blood Wedding was part of Lorca’s plan for a “trilogy of the Spanish earth”—unfinished when he was killed in 1936. Most critics include Yerma and The House of Bernada Alba in the “rural trilogy” but Lorca did not include the latter. Lorca was an open homosexual and an outspoken socialist, both dangerous positions in 1930s Spain. During his school days, he became friends with experimental artists Luis Bunuel and Salvador Dali. He was a member of the Generation of ’27, a group of Spanish poets who brought European modernist movements to Spain. At the beginning of the Spanish Civil War, Lorca was captured and executed by Francisco Franco’s militia, who were fighting to overthrow the democratically elected Republican (left-wing) government. His body was buried along with others and his remains have never been found, despite recent efforts to excavate Spanish Civil War burial sites.

Blood Wedding continues at Lookingglass Theatre, 821 N. Michigan Ave. (inside the Water Tower Waterworks) through April 24. Performances are Wednesday-Sunday and you can buy tickets for $40-75. The box office number is 312-337-0665. Accessible performances are March 31 (open captioned) and April 7 (touch tour, audio described).