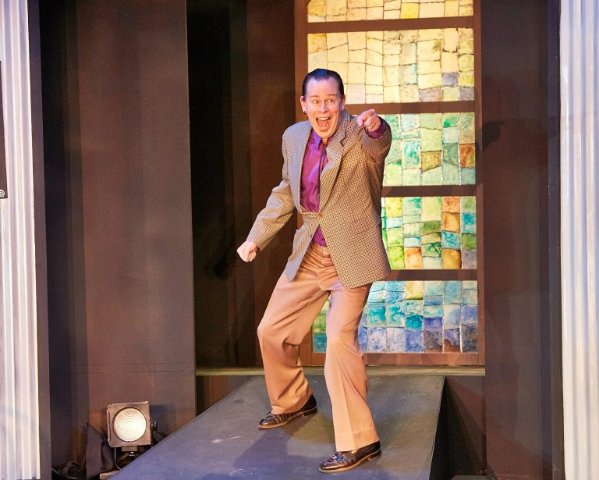 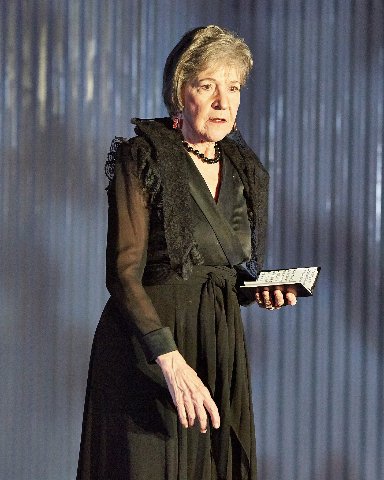 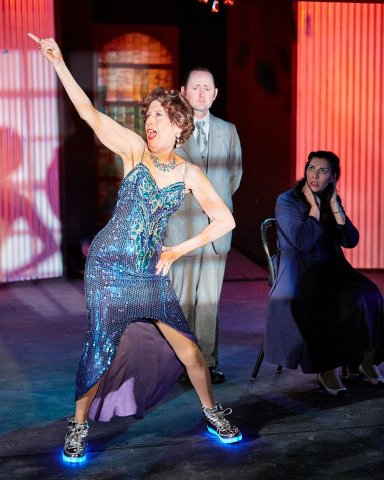 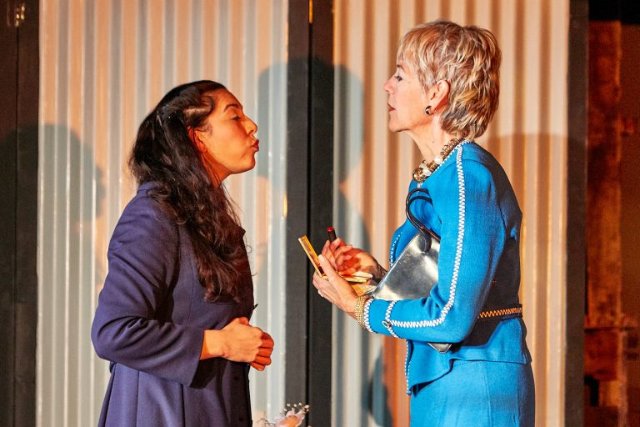 Sarah Ruhl is one of the darlings of contemporary theater. Her work ricochets between grounded and fanciful, with storylines usually a little off-normal, and populated with at least some loopy characters. “Dead Man’s Cell Phone” is one that turns from realistic to fantasy at intermission. And like that dichotomy, there are other elements for which she can’t seem to decide which way to go. The result is an often amusing, generally provocative offering that may leave some viewers wondering what the point is. However, most will find it an enjoyable challenge.

In the opening scene, Jean is at a restaurant, and at a nearby table, a man’s cell phone is ringing as he sits impassively. Unresponsive to her urging that he answer the phone, she goes over and picks up. Wouldn’t you? Ahem! But the stage is set (figuratively) for her future life’s voyage by her spontaneous decision to tell the caller that Gordon, the phone’s owner, is unavailable.

I know. You’ve looked at the title, and you know that he’s dead. Jean, who doesn’t even own a cell phone and perhaps lacking any higher order purpose, has decided to ensure that no future call to Gordon goes unanswered. But is that ditsy enough? Of course not. She decides to portray herself as a workmate of Gordon’s, without even knowing his line of work. Before long, she insinuates herself into the lives of his family and more.

Clearly, a central theme of the play concerns the power of communication, and particularly how obsessed we have become to stay in touch at all times with mobile phones. Even Gordon’s funeral eulogy is disrupted by phone ringing. Ironically, this private form of communication has become very public in the sense that many users act as if they are in a sound proof bubble and share intimate details of their lives for anyone around to hear. Extrapolating, this is but a part of the younger generations’ willingness to expose their personal lives and compromise valuable information by everything from exchanging nude photos to sharing vital personal data on social network websites in most careless fashion.

However, Jean is not really a part of this high tech world, and she finds a high touch ally in another Luddite, Gordon’s brother Dwight, who works in a stationary store. Indicative of how wed they are to the past, Jean and Dwight ecstasize over the texture of various papers and embossing.

Along the way, another theme arises – looking for love. Jean is unconnected and yearns for love, and she senses that need in others. This need is fulfilled, when separately, Gordon’s mother, wife, and brother all glow when Jean tells them of Gordon’s last thoughts and wishes which reflect his love for them. Whether those claims are true is for the reader to find out.

But wait, there’s more. It seems that Gordon’s “profession” (not to be revealed here) was rare and controversial, but one that delivered social good. So a sub-theme of the plot concerns prioritizing conflicting social benefits and the role that society versus the individual plays in deciding what rules for behavior should prevail.

Ross Valley Players does a commendable job overall in staging “Dead Man’s Cell Phone.” Acting is generally sound. The highlight of the show is the opening of the second act, when Steve Price as Gordon delivers a powerful soliloquy from beyond the grave. Christine Macomber is very well suited to her part as Gordon’s privileged mother. The only negative jolt from the players is not the acting. Marilyn Hughes acts perfectly well as the widow, Hermia, but the part is written for a much younger woman, as is evident from one of the plot turns.

Director Chloe Bronzan husbands the creative elements well. Like the script, the sets are a little schizoid, with some detailed and realistic elements and some spare abstractions, but overall, it works well. Low but variable lighting adds to the atmosphere as does sound. Listen for an interesting distortion of the Dave Brubeck classic “Take Five.”

Don’t expect a typical linear narrative if you attend this play, and be prepared for a major tone change when realism collides with supernatural. But for those who are curious and flexible (and who would admit to not being those?!), you should have an interesting discussion on the way home from the play.