Next to Normal at SpeakEasy Extended to April 22 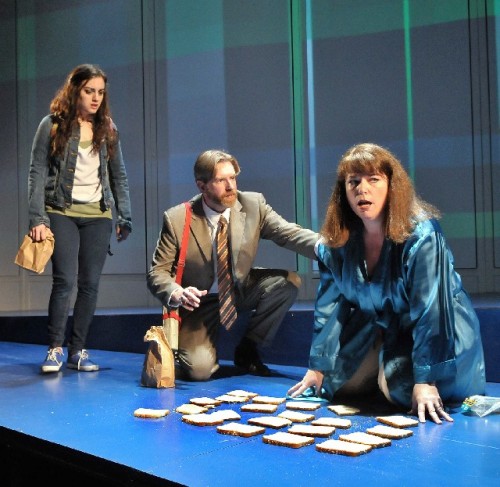 Diana (Kerry A. Dowling) compulsively makes all those sandwiches for her family. (Photos Craig Bailey/Perspective courtesy of SpeakEasy) 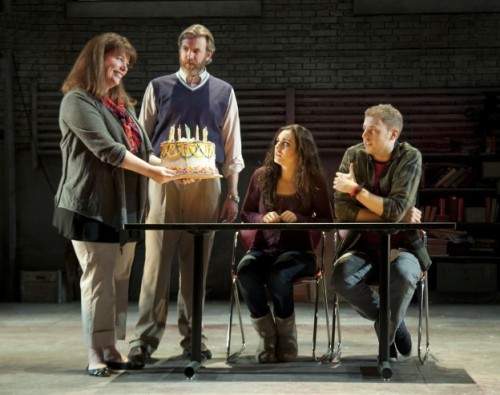 A birthday cake for the teenager Gabe who died in infancy. 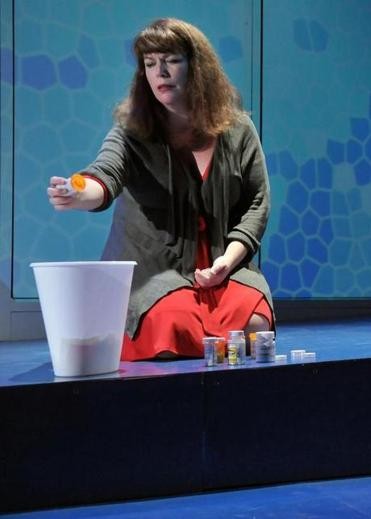 Diana with a few of her favorite pills. 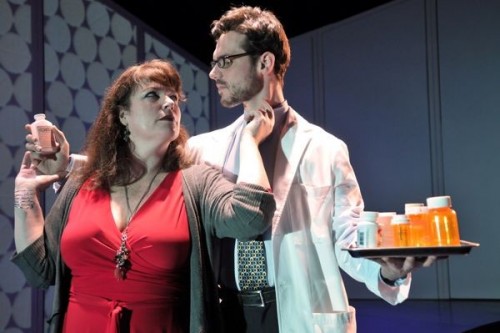 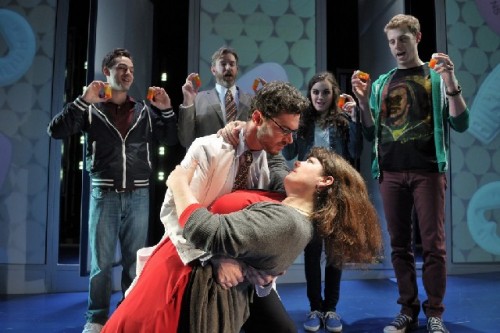 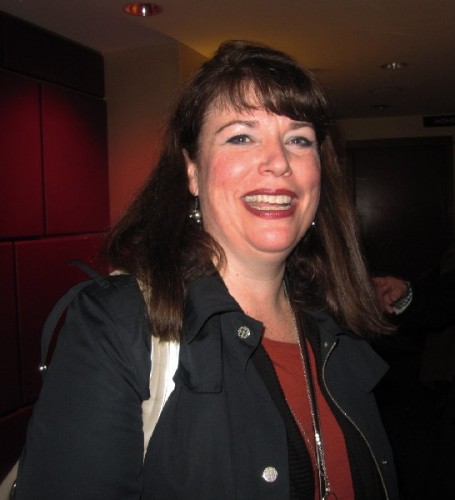 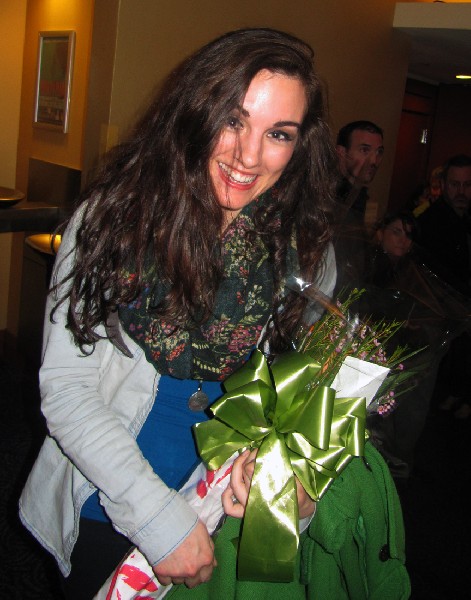 Sarah Drake is a name to remember as Natalie. Giuliano photo.

In 2010, the deep and dark musical Next to Normal, with music by Tom Kitt, book and lyrics by Brian Yorkey, won the Pulitzer Prize for Drama. While a stunning work of literature it would seem to be a hard sell to audiences for whom the notion of musical implies a light and easy, tuneful evening of song and dance. The stunning and galvanic production at SpeakEasy Stage Company, brilliantly and inventively directed by Paul Diagneault with prodigious music direction by Nicholas James Connell, was anything but that.

With a prelude and 17 richly nuanced and complex songs in Act One and another 20 in Act Two, and relatively little spoken dialogue in between, coupled with an emotionally demanding and riveting plot, this is more like opera than our received notions of musicals. They used to be coupled with “comedy.”

Trust me, there were few laughs or lighthearted moments during a compelling, edge of your seat performance before a sold out audience. This hit has already been extended through April 15.

Well, actually not quite true. We giggled self-consciously as, while identifying a riff on “Favorite Things” from The Sound of Music, it morphed into “These are a few of my favorite pills.”

It referenced the desperate attempt of the magnificent Kerry A. Dowling (Diana) to find the right chemical balance to render her at least Next to Normal during a sixteen year struggle with bi-polar disorder. She has sunk ever deeper into delusion and depression to the point where psychopharmacology no longer works. She is being eased into the next phase of treatment by Dr. Fine/Dr. Madden (Chris Caron) to consent to electric shock therapy.

Her aria conveying fear of shock therapy channels the demise of Jack Nicholson in One Flew Over the Cuckoo’s Nest. The therapist assures her that the voltage is no greater than illuminating a 100 watt bulb.

As the play begins, it is morning and Diana is sending the family off with sandwiches for lunch. One for her husband Dan (Christopher Chew), one for her daughter Natalie (Sarah Drake), and one for her sixteen-year-old son, Gabe (Michael Tacconi).

Signifying dysfunction, Diana can’t stop making more and more sandwiches. Gently the ever patient Dan helps her put away all that bread. He suggests that it is time to see her therapist and perhaps upgrade the medications.

In a later scene during a family dinner, Diana produced a cake to celebrate Gabe’s birthday. Dan and Natalie look on with horror. It seems that Gabriel died at six months from an undiagnosed case of intestinal blockage. We learn that it is abnormal to grieve for more than four months.  But she has never let go, and the infant has been with her all these years now as a self absorbed, virulent, and demanding teenager.

Natalie, enduring the awkward years of adolescence, is competing for her mother’s love and attention with a long dead brother whom she never even knew existed. She knows only that her mother is delusional and has never been there for her.

This is strong stuff.

The production has been brilliantly staged with a simple set of intersecting triangles a long one along the back of the stage and a shorter one on one side designed by Eric Levenson. The back is divided into panels that function as egress for the characters. Onto these flats are wonderfully precise, articulate and evocative video projections designed by Seághan McKay. They create endless variations and extensions of the drama which is evocatively augmented by the pristine lighting of Jeff Adelberg.

Perhaps as an old dog, there is a steep learning curve of catching up with the new tricks of musical theatre. Think about it. How outrageous to build all of those arguably wonderful songs around a meticulously realistic and gritty, disturbing script. Next to Normal is the depressing saga of a woman’s struggle with mental disease, attempted suicide, electric shock treatment, and the devastating impact on her husband and daughter.

And yet, this is a show that leaves one feeling greatly and profoundly enriched. We did not, however, exit whistling one of those engaging happy tunes. This was more like getting beat up and tormented for a couple of hours then allowed to go home.

Perhaps it was because the story line is too familiar through painful experiences of family and friends? It makes us squirm, twist and turn in our seats. Particularly as this painfully realistic production spares us no detail.

After shock therapy part of her “recovery” entails losing the memory of the strong willed and clinging persona of her dead child. But memory loss has its down side. Diana has also forgotten her husband and is rediscovering her daughter. The man who was so devoted to her through all those years is now a stranger to her. She can only find herself through leaving him.

Now semilucid, or at least on the initial steps of protracted self discovery, Diana comes to recognize the duty, responsibility, and mothering she neglected to give to Natalie. It seems that the delusion of Gabe was always more urgent, demanding and needy. In a moment of hope for bonding, Natalie understands that her relationship with her mother can never be normal, but they can strive to make it next to normal. It provided the most poignant and hopeful moment of the drama.

SpeakEasy has justly developed a reputation for producing compelling productions of fresh and provocative theatre. This is accomplished within tight budget constraints entailing an economy of means that does not short change galvanic dramatic impact.

In this case, Next to Normal has assembled a brilliant cast with powerful and resonant musical ability. Appropriately, the matrix of the drama focuses on the awesome strength of Dowling in the lead role.

Remember the name, Sarah Drake, as the teenager Natalie. She has a wonderful voice coupled with richly nuanced acting which is leagues beyond her years and life experience. A senior at the Boston Conservatory Drake is becoming known to Boston audiences. Next stop, Broadway, big time.

As the faithful, supportive, loving father Christopher Crew was rock solid. His performance and gravitas anchored the emotional intensity of tough scenes which in lesser hands might easily have been over played.

In a tandem of physicians Chris Caron brought great diversity to his roles. In addition to terrific vocals, there was a stunning range to his characters from nurturing, professional and thoughtful to over the top as a freaky, therapist rock star. It was one of the most surprising and compelling vignettes of the drama.

Michael Tacconi as Gabe was eerily credible when he sang “I’m Alive.” There was reluctant empathy for his struggle to stay tangible as a figment of Diane’s imagination. Her cure will mean his death. As Diane deals with ending that delusion, Gabe starts to become real to Dan. This is the phenomenon of transference when the patient becomes stronger at the cost of a therapist or spouse who absorbs the illness. It is why therapists as a function of their practice are profilactically treated by other therapists.

Rounding out the cast is Michael Levesque as Henry, a nerdy kind of guy smitten with Natalie. There is naïve innocence in his ardor and devotion. He’s a nice guy, easy going stoner. In sensitive and obvious ways, he parallels the likeable, patient and long suffering Dan. We are left to speculate that the lives of the juveniles will parallel the tragedy of the adults.

Yes, by all means, submit to this not to be missed but tortuous and spellbinding evening of mental disease and family dysfunction. Then take two aspirins and call me in the morning. Let’s talk. This is an experience that will linger for a long, long time.

Wow. What a magnificent play and spot on production.