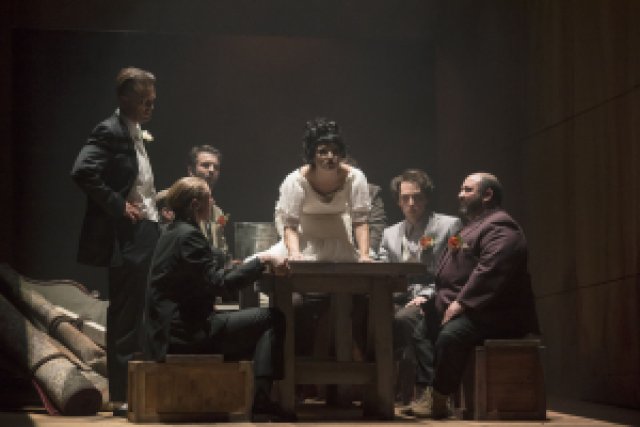 Polly Peachum, sung by Kelly Kaduce, at her wedding with Macheath (Christopher Burchett) at left and his boys. 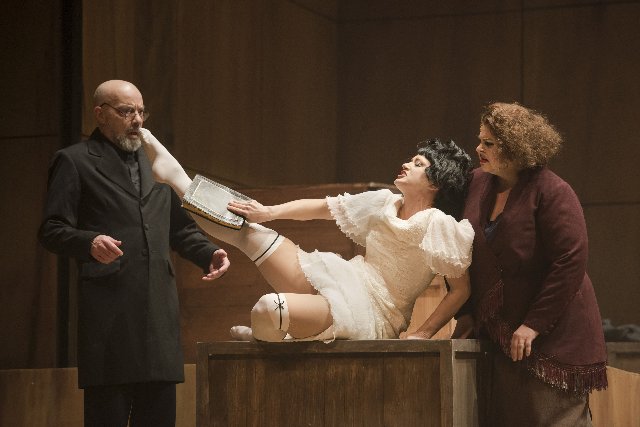 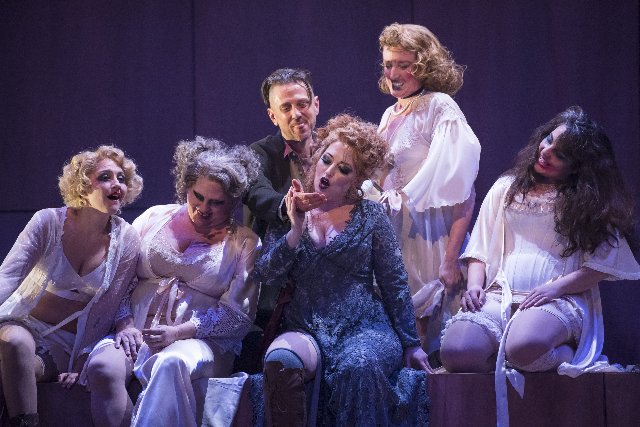 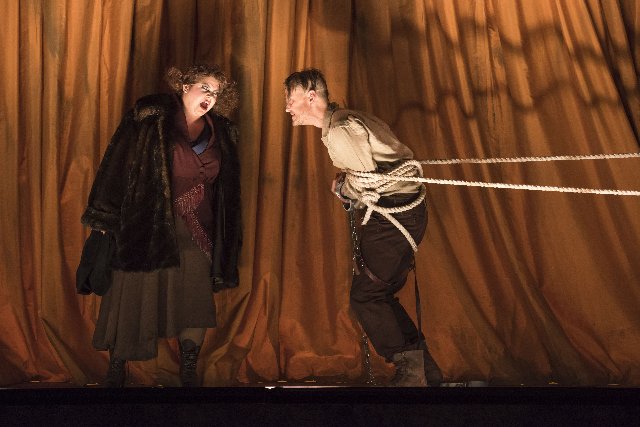 Mrs. Peachum (Michelle Trainor) with Macheath (Christopher Burchett) on the way to the gallows 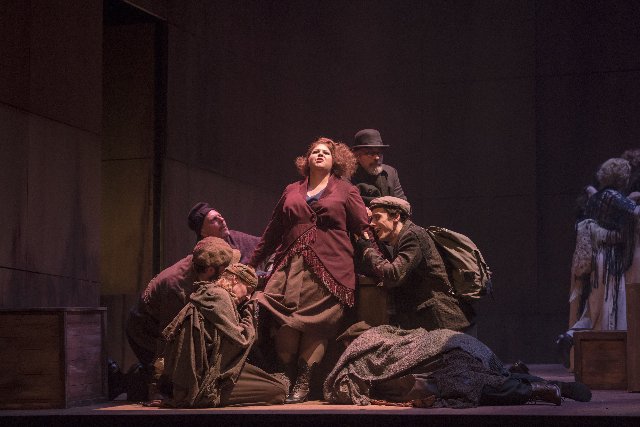 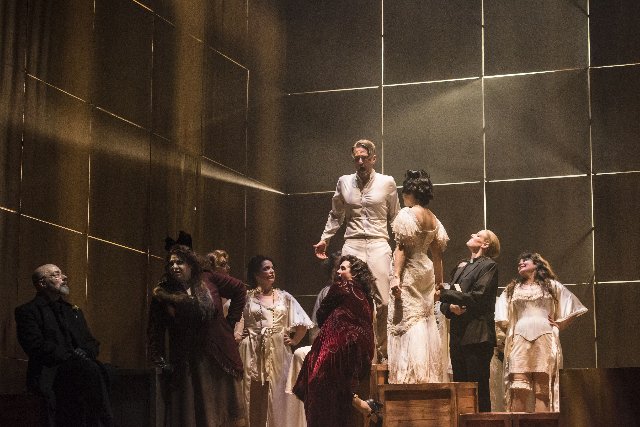 The gang's all here, at least some of them. Macheath (Christopher Burchett) and the Peachums, Mister (James Maddalena), Missus (Michelle Trainor) and Polly (Kelly Kaduce) with the Whores

Kurt Weill and Bertolt Brecht’s “The Threepenny Opera” (“Die Dreigroschenoper” in the original German) is one of the great crossover successes in music theater, in a category shared only with George Gershwin’s “Porgy and Bess” and Leonard Bernstein’s “Candide.” Its big hit, “The Ballad of Mack the Knife,” is more often sung by Pop and jazz artists than opera singers, the long list of those essaying it stretching from Weill’s wife Lotte Lenya to Marianne Faithfull, with memorable renditions recorded by Louis Armstrong, Ella Fitzgerald and Bobby Darin, among others, including, on piano, Liberace, which has to be seen to be believed. (https://www.youtube.com/watch?v=wD7dw_BW_UI) “Pirate Jenny,” its other hit piece, was indelibly recorded by an angry Nina Simone, and I can’t think of any opera diva who likewise committed it to disk, not even Teresa Stratas, for whom Weill was a specialty.

The big question though is, ‘Crossover from what to what?’ Fooled by its title, I and I suspect others, thought it to be a ballad-based opera, which misunderstanding I was quickly disabused of at the Huntington Theatre Friday night. I had thought it to be in the German tradition of the singspiel, a work that is mostly sung with spoken passages to facilitate plot development. Both Mozart in “The Magic Flute” and Beethoven in “Fidelio” composed operas in the singspiel tradition that were real operas. What I discovered to my chagrin was that “The Threepenny Opera” is a musical. I had expected some spoken passages – I have a recording with some spoken text between songs, but not enough for them to dominate the work (evidently most of the text had been cut). In an interview with the Brookline TAB, stage director James Darrah, who seemed strangely hostile to both the opera genre in general and to “Threepenny” specifically, boasted that 70 percent of the work is spoken text. OK. My bad – I should have done my homework.

There is a historical reason Weill and Brecht created a play with songs, a ballad opera. Both were leftists, Brecht more so than Weill, during the Weimar Republic, that German experiment in liberty and poverty between two world wars, and they were hostile to the world of opera, which at the time catered to the most reactionary elements of the bourgeoisie. They appropriated an English ballad opera, John Gay’s “The Beggar’s Opera,” which 200 years before had been written partially to attack George Frideric Handel’s establishment opera, which was marked by visual and musical extravagance, featuring virtuoso arias sung by elaborately costumed and bewigged divas and divos in Italian, not widely spoken in London at the time. It was such a success that Handel’s style of opera, the kind of opera some of us, including this writer, so like today, was soon flushed away in the rising tide of more egalitarian ideals.

The irony today is that the musical, the descendant of the singspiel, the music hall, operetta and other populist musical theater traditions, is the favored genre of the overstuffed bourgeoisie, who want, at least most of the time, to be entertained with empty spectacles that make no requirements of their brains, and that opera, at least some of the time, attracts a more inquiring audience that likes, along with the soaring vocal lines of Puccini and Strauss sung by singers who don’t need to be amplified, works that might actually challenge them to think.

Anyway, “The Threepenny Opera” was a revolutionary work, and no matter how it is revived, if that subversive intention is eliminated or smoothed over, it is sure to be a failure at least on the intellectual level. Which is exactly what director James Darrah has intentionally done in the BLO production. In that ill-advised TAB interview he pooh-poohs the anti-capitalist message the work originally packed. He sees it as more “anti-ignorance than anti-capitalism,” and he doesn’t think “Threepenny” lends itself to “overtly political messages.” Tell that to Bertolt Brecht, who was a Marxist, later a Communist, who reestablished himself after World War II, from luxurious LA exile, in East Berlin, where he founded a revolutionary theater ensemble, one of the most famous avant-garde theaters of the post-war years. All of his work carried "overtly political messages."

In any case, the work is populated entirely with denizens of the demi-monde. A gang of beggars, organized by the hypocritically Christian Mr. Peachum, faces off in the streets against of gang of pickpockets, not opposed to bloodier activities, including murder and rape, led by Macheath, he of the famous Knife. For a little rest and relaxation, there are the Whores, who inhabit brothels frequented by members of Macheath’s gang, and there are the representatives of the Empire, the police and the clergy, who are on the take from whoever is willing to pay.

There are many ways the BLO could have made this contemporary, which the work almost requires. Set it in the contemporary American urban underbelly, add drugs to the mix. Enliven the score with hip-hop. Look at Blaxploitation films of the ‘70s. Base Macheath on Shaft. And Mr. Peachum on Jerry Falwell or whatever preacher has the ears of the gullible today. Etc. Etc. Etc. Better yet, use the more contemporary stories told in movies by Mexican director Alejandro González Inárritu, and set it in a border town where all the elements of the original story flourish. But of course in our politically correct moment all of that would cause controversy, which no institution today would want to risk. Too bad. It could have been relevant – and fun. The BLO could have followed its own example of updating or adapting classic texts – its incendiary Calixto Bieito production of “Carmen,” reset in 1950s Spanish North Africa, and its Rosetta Cucchi/John Conklin production of “La Bohème,” which was overlaid with Brechtian (or Godardian if you prefer) supertexts.

Instead, the BLO chose a more decorous updating. The space, a universal set, is neither here nor there, now nor then. It is beige. The costumes suggest the ‘20s, when the opera was written rather than the Victorian era, when Weill and Brecht set it. The set, a box lined with a grid of wood panels, by Julia Noulin-Mérat, at least served to evoke the beggar’s den, the stable where Polly and Macheath marry and the jail where Macheath is incarcerated. The costumes, by Charles Neumann, showed a little more creativity, from the contemporary punkish garb of Macheath to the cheap ‘50s fashions – think ripoffs of those in the recent film “The Phantom Thread” - worn by Polly at her wedding and after, to the dishabille of the whores.  (In the theater, whores, unlike, say, Stormy Daniels, are always in dishabille.)

Musically, the production had its highs and lows. It opened with the Streetsinger, Daniel Belcher, who later served as Police Chief Tiger Brown, singing “The Ballad of Mack the Knife,” the evening’s big number. Instead of consulting all the great performances committed to film or tape for help in generating his own interpretation, Belcher delivered a bland, non-committal performance. Again, beige. OK – maybe he was intimated by those precedents. Who wants to follow Bobby Darin? (Not to mention Ella Fitzgerald.) And could he snap his fingers in this production that stuck pretty much to the original musical text?  Anyway, I thought – ‘This is the famous “Mack the Knife”????’ and I sunk back in my seat fearing for the worse to come.

It did get better, but not by enough to redeem the production’s conceptual problems.

The good news first: Conductor David Angus led his small band, heavy on the brass and drums, with harmonium, piano and accordion, with the jauntiness requisite for Weimar era German jazz. As Macheath Christopher Burchett looked the part – slim, feral, sporting a haircut with shaved sides like alt-right hell-raisers – and he sang well, putting over the comradely “Ballad of Three Soldiers” with two of his bros particularly well. And Michelle Trainor as Mrs. Peachum nearly stole the show every time she appeared on stage, which was not often enough. Loud, vulgar, with an outsized presence, she had the pizzazz the show desperately needed. (BTW, Trainor, a veteran of the BLO’s “emerging artist” program, is turning out to be the best dramatic soprano in town – just a couple of weeks ago she delivered a very fine Jocasta in Stravinsky’s “Oedipus Rex” for Emmanuel Music, an entirely different sort of role.)

As Polly Peachum, the lead female role in this large cast, Kelly Kaduce was hilarious with an accent somewhere between Cockney and a ‘30s movies moll. (I think Mary Astor is the model for the stupid, sluttish type.) Her singing was no more than adequate, however, and she sang “Pirate Jenny,” the revenge fantasy of a hotel maid that is the most political song in the work, without the necessary fire. As usual, Chelsea Basler, here Lucy Brown, the police chief’s daughter, sang well and played her part to the hilt. Soprano Renee Tatum seemed a little unsure of herself as Jenny Diver, one of Macheath’s favorites at the Whorehouse, singing a parody of a real opera aria. Veteran baritone James Maddalena brought a knowingness to the corrupt Mister Peachum and sang out with a robustness he has sometimes lacked in recent years.

The rest of the cast was no more than adequate, even the usually outstanding local singer David Cushing didn’t get much opportunity to impose his identity on his role as one of the members of Macheath’s gang.

The BLO show seemed to go on forever – it clocked in at two hours and fifty-five minutes. There was an easy solution at hand: Cut some of that dialogue, much of which was inaudible to begin with. With the bad decision not to use supertitles, which, for good or ill, the opera audience has come to depend on, at least this member of the audience was left in any case with no more than the gist of the dialogue.

“The Threepenny Opera” is a dated work, but at its heart it has relevance for today’s audience. But it needs to be done with color and verve. Alas, the BLO production was all too beige.