At the Palm Canyon Theatre 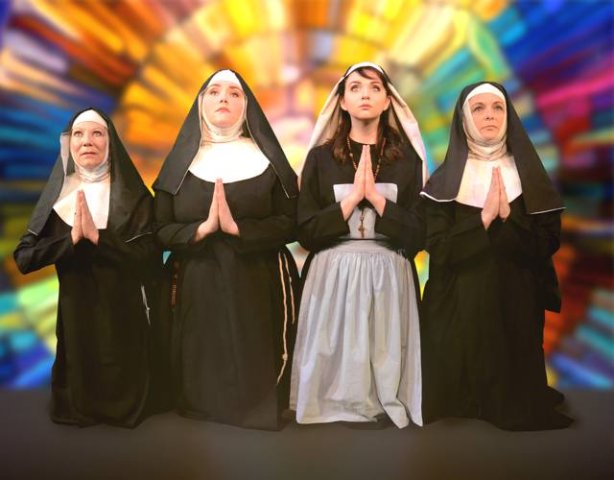 When it comes to big, glamourous, gorgeously costumed, musical productions in the Coachella Valley, then we’re definitely talking about the Palm Canyon Theatre (PCT) of Palm Springs. They have more than twenty years of experience and know-how in producing all forms of theatre, but specialize in Musical Theatre productions.

Depending on how long you’ve been a patron of the theatre there have been many memorable productions over the years.   Beginning with their first production “The Desert Song”, 21 years ago, to their current production “Sister Act” the musical, there have been many audience favorites such as:  “Man of La Mancha”, “Jekyll and Hyde”, “Cats”, “Les Miz”, “In the Heights”, “Evita”, “West Side Story”, “Hello Dolly” and “Young Frankenstein”.  My apologies to all if I’ve omitted your favorite Palm Canyon musical. I left out quite a few of my favorites as well.

Which brings us to the current PCT production “Sister Act” the Musical that owes its theatrical existence  to the movie “Sister Act”, starring Whoopy Goldberg. Popularity begets popularity.  The movie was then turned into a musical written by Alan Menken and Glen Slater, from a libretto by Bill and Cheri Steinkellner, with additional book material by Douglas Carter Beane. The result is a musical Blockbuster which I believe is one of the best musicals ever produced by the Palm Canyon Theatre.

Wonderfully staged by Robbie Wayne, who also choreographs and performs as an actor in this high energy musical production that features a cast of thirty performers led by a theatrical force of nature – actor, singer, performer, and star – Nicole Tillman. And, boy can she sing and belt her numbers. Ms Tillman was last seen at PCT in “Avenue Q”; we hope it won’t be her last production at PCT.

She brings to her performance of disco diva Deloris Van Cartier, such energy and talent; including the sass and self-assurance that’s required to fuel and drive this disco beat production.  Despite her brassy, breezy, ‘take charge’ way, we see her vulnerability and her softer, empathetic, side as well.  She’s a character we care about and actively root for. If an audience fails to root for the protagonist, or even the anti-hero, in a stage or movie, then that’s a ‘problem’ production. Audiences need to pull for someone, if not there will be disconnect and a less satisfied patron.

Thanks to a magnificent set design by resident design wizard J.W. Layne and Kay Van Zandt (who also is the Lighting Designer) along with director Robbie Wayne allows 30 actors, singers, and dancers, the space to perform their musical magic.  Director Wayne neatly solves the stage traffic management issues for scenes in front of the curtain as well as the mayhem taking place behind it. It must be bedlam backstage as the actors prepare to make quick entrances and exits, but everyone is kept on their toes thanks to stage manager Rob Weidert, where if glitches occur the audience will be none the wiser.

Enough cannot be said about the gorgeous costume designs of resident designer Derik Shopinski, and his costume design assistants: Kathy Ferguson, Virginia Sulick, Colleen Walker, Mat Tucker, Katie Fleishman, and Lisa Goldberg. All of the costumes glitter and sparkle.  And the nuns’ costumes are primly appropriate for a group of singing and dancing nuns.

Musical plot lines are usually simple with some stretching plausibility a bit, but in general, the music and lyrics, usually smooth over any bumps in the story plotline.  In “Sister Act”, the comedy story and plot can be boiled down to a case of a disco diva (Ms. Tillman) on the run from her gangster boyfriend and his thugs, finds herself in a police witness protection program in a convent… don’t rationalize, just go with flow and enjoy.  The characters and the performers in this splendid musical certainly are.

It’s a hilarious, entertaining ride courtesy of a group of committed and dedicated performers.  There isn’t space to list all of the cast, however, there are always standouts and this stellar production is no exception.   Amanda Burr as Mother Superior, Elizabeth Schmelling as Sister Mary Robert, Morgana Corelli as Sister Mary Lazarus, and Jasmine Shaffer as Sister Mary Patrick, score vocally as well as in their acting scenes. The convent scenes are highly entertaining. Who knew nuns could be so entertaining and funny?

Not to be outdone by the ladies in the production, fine performance come from Tenor Ben Reece as a helpful Police Officer Eddie Souther,  Anthony Nannini, a wonderful dancer and comedian, plays TJ one of Curtis Jackson’s thugs, and Terry Huber as Monsignor O’Hara, perform the heavy comedy lifting on the Men’s side.

In the music department, “Sister Act” benefits from the talents of the accompanying orchestra led by music director Jaci Davis on piano, David Bronson, on drums, Daniel Gutierrez, 2nd Keyboard, and Larry Holloway on Bass.

“Sister Act”, the musical, performs at the Palm Canyon Theatre Thursdays through Sundays through March 25, 2018.  For reservations and ticket information call the box office at 760-323-5123