Through the Elevated Line by Novid Parsi 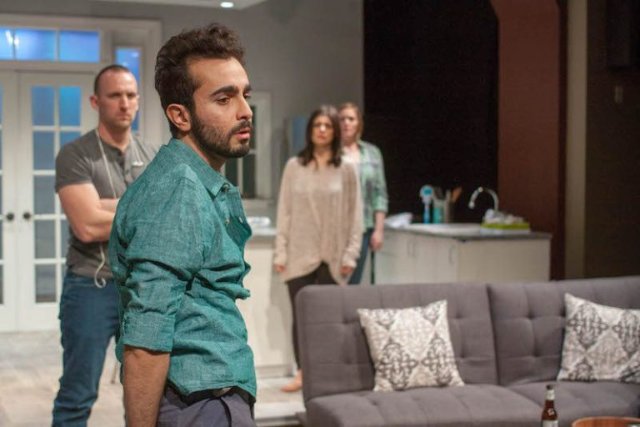 Through the Elevated Line at Silk Road Rising is a play about a stranger in a new land. We meet Razi Gol (Salar Ardebili) as he arrives from Iran. We learn about the reception he receives by family and friends and the problems he faces becoming familiar with Chicago. In Iran, Razi was discriminated against for being gay, and left his country after being imprisoned with his boyfriend for their political activities. The play takes place over the span of six months, the maximum length of time until a visitor’s visa to the U.S. expires.

Razi’s sister Soraya (Catherine Dildilian) also is an immigrant. She has been in the U.S. for 11 years, sent here by her middle-class family to go to medical school and earn a healthy income. She has now nearly completed her dermatology program and if all goes well, she’ll have her own practice next year. Soraya is married to Chuck (Joshua J. Volkers), a South sider who renovates and flips houses. Their current apartment is in the midst of renovation and looks like a war zone when Razi arrives to find out there’s no room or privacy for him.

Chuck is a Cubs fan (that bit of treachery for a South sider is never explained) and didn’t go to college. He and Soraya are clearly very much in love (and lust). When the play opens, Soraya is in the early months of her pregnancy, which progresses through the play’s two acts. Razi is welcomed by his sister and resented by his tough guy brother-in-law. Their friends Beth and Ben (Alison Plott and Scott Shimizu) introduce Razi to Beth’s gay brother Sean (Philip Winston) and the two strike up a warm friendship.But Razi never feels he fits in his sister’s home or in the new country. While Soraya and Chuck are working, Razi stays home reading Persian poetry, dipping into Chuck’s liquor supply, and later, cruising Boystown.

The title suggests the Chicago location. The play is set in Uptown near the Lawrence Red Line station and the noise of trains punctuates the story, which is loaded with references to Chicago locations and customs. The time is 2016 during the months leading up to the Cubs’ World Series victory.

Playwright Parsi likens the triangle of Razi, Soraya and Chuck to the relationship among Blanche, Stella and Stanley in A Streetcar Named Desire. Razi and Soraya’s parents both died recently and Razi was forced to spend the family money and the revenue from the sale of their house to pay the medical bills. Chuck’s insistence on Soraya getting her share of what they thought was the parents’ estate is reminiscent of Stanley’s battle with Blanche in Streetcar. (If the Streetcar analogy doesn’t make sense to you, never fear. The story works on its own.)

Through the Elevated Line is made up of a series of sometimes-bumpy scenes, running about 2.25 hours with one intermission. The direction seems uneven too, with some characters shouting when it doesn’t seem called for. Razi is a sympathetic character despite getting into trouble both at home in Iran and in Chicago. His relationship with his sister is sweet and realistic. His friend Sean is perfectly portrayed by Winston, whose performance is nuanced and confident. Chuck’s character, however, is overwritten to the point of stereotype. He’s such a bully that it’s hard to understand how Soraya fell in love with him. The character could be dialed back for credibility.

Through the Elevated Line runs through April 15 at Silk Road Rising, 77 W. Washington, on the lower level of the Chicago Temple building. Tickets are $35 with $20.50 tickets for students. Performances are Tuesdays and Friday-Sunday.