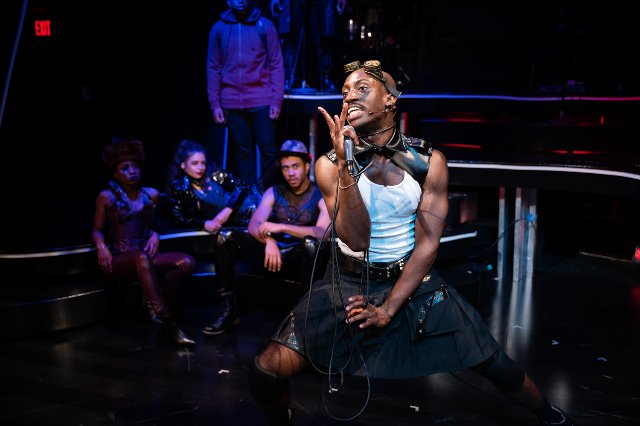 Ain’t life great?  What’s better than bemoaning a big commitment, only to be blown away by it?  It’s not clear why I had low expectations.  I really like Shotgun Players’ work.  I dig rock-and-roll.  I have great capacity for the Black experience and welcome European settings.  Maybe it was the notice that understudies would dominate the cast that evening.  But the show had me from “hello.”  “Passing Strange” is a distinctive and always involving play that deserves the Tony that it won for best book of a musical and its six other nominations.  Shotgun offers a high energy production with artistic values that fit the bill.

With “Passing Strange,” musician/playwright Stew created a multi-faceted coming-of-age story set to music and verse.  The music is a mashup of rock era styles that never hits a false note.  Both song lyrics and spoken sections set to music drive the narrative forward.  Romello Huins’ set is comprised of an unadorned apron for the show’s action, backed by a tiers occupied by the rock band.  The look created is that of a night club in a dark cave with Stephanie Anne Johnson’s neon lights defining the contours of the uneven walls of the cavity.  Her extensive use of area lighting helps create a perfect ambiance for the sometimes dark rock musical.

Dominating the tiers is the charismatic Albert Hodge, “The Narrator.”  Although the actors who portray characters also have singing parts, The Narrator carries the bulk of the vocals.  Elevated above the acting stage, Hodge looms large.  He conveys the narrative in a storytelling style with broad gesticulation, sly humor, and a powerful baritone singing voice with rasp and soul.

The main character is called Youth, whose story begins as a teen in 1976.  Understudy Myles Brown portrays Youth with great confidence and skill.  If you didn’t know that he was an understudy, it would never occur to you.  Although a loving son, he goes through many of life’s natural transitions.  Objecting to phony churchiness as the Baptist Fashion Show, he adopts Buddhism.  But drawn in by attraction to a girl, he joins the church choir and sees the connection of call-and-response, common in Black church music, to rock-and-roll.

Many characters will cross Youth’s path, but none are as indelible as Franklin, the choir master.  Shakur Tolliver is an absolute scream as Franklin, the pot smoking son of the preacher, caught in a karma that he can’t escape.  His lanky body, big mouth, large pearly teeth, wild expressions, and big yukking are totally reminiscent of a ‘70s sitcom comedian, whose name won’t be mentioned.  That might imply that Tolliver is an imitation of a known star, but frankly, I can’t imagine anyone being more compelling in this part.

Making and writing music will motivate Youth, and he will travel through punk then psychedelic rock, while ingesting the latter’s namesake drugs.  Finding that after a psychedelic trip, he’s still in the same place, he will try a real trip.  His wanderlust will take him first to the paradise of the laid-back, Amsterdam, and then to Berlin, where even the anti-establishment is rooted in rules and tradition.  The same several supporting cast members who play Youth’s middle class Black friends in Los Angeles will be the open, free-loving Dutch and the abrupt leather and latex Germans.  Their transformations are all quite complete and compelling.

Along the way, Youth will be challenged and will grow.  He will face challenges of identity, family, friendship, and love.  He will suffer the realization that many decisions that affect adult life are made by stoned teenagers.  In the song “Bleeding Sunshine,” he will observe his need to break the chain of I, I, I, and find that he can’t be loved unless he reveals himself.  He will also learn new dimensions of being a Black man.

Literary titles often have great importance to authors, but sometimes their significance is lost on the audience.  “Passing Strange” derives from Stew’s inspiration to write a theatrical musical, which is Shakespeare.  Appropriately, the title come from a revelatory soliloquy in “Othello” spoken by the Black Moor himself.  But the word passing in Shakespeare’s time meant very or extremely, and the term referred to his adventures.  The double entendre of the word passing concerns a Black passing as white, or anyone passing for something that they are not, as Youth will attempt.  Finally, it can relate to passages, which Youth (and youth) endures.

The musical is fully engaging, and Director William Hodgson has orchestrated a complex production task with precision.  Perhaps to comply with the current trend of tighter narrative design, the play could be pared down a bit, but most of the vignettes are interesting and well produced.

“Passing Strange” with book and lyrics by Stew, music by Stew and Heidi Rodewald, is produced by Shotgun Players and appears at Ashby Stage, 1901 Ashby Ave., Berkeley, CA through April 10, 2022.