Juno and the Paycock by O'Casey 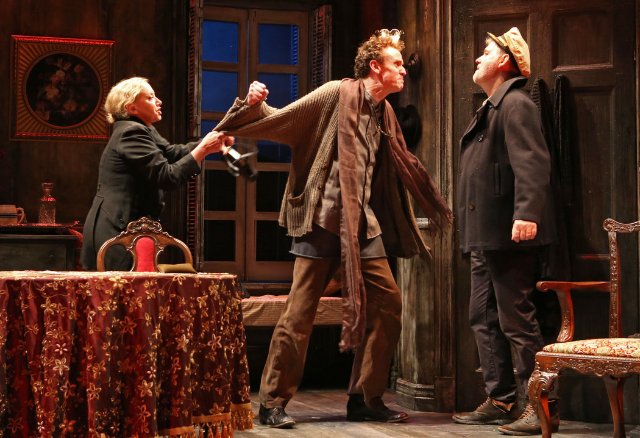 The tragedy of ’s civil war and religious separatism still haunts the country, its citizens and expatriates, wherever they may live in the world. It’s well to remember, after this jolly St. Patrick’s Day, that tragedy lies beneath the celebration. The Ferryman, the current Broadway success, tells the story of a family during the Troubles of the 1970s and early 1980s. It continues with today’s Brexit issues over the border between the two .

Irish Repertory, ’s distinguished Irish theater company, is in the midst of its O’Casey Cycle, three plays by Sean O’Casey set during the Irish war for independence and the civil war that followed.

His 1924 play, Juno and the Paycock, set in 1922 , is the second play in the O’Casey season. It’s a family story that will make you laugh and shed a tear; it’s superbly performed by a cast of many Irish Rep regulars and directed with care by Neil Pepe.

The play explores the joys and sorrows, the rise and fall, of a poor family, the Boyles. The senior Boyles are Juno (Maryann Plunkett), the long-suffering wife of “Captain” Jack Boyle, played with gusto by Ciarán O’Reilly. Juno and daughter Mary () both have jobs but the Captain manages to avoid work, preferring to spend time in a snug with his friend, the reprobate Joxer Daly (John Keating). Whenever there’s the possibility of an actual job, the Captain finds, “I’m afther getting a terrible twinge in me right leg.” Juno’s reaction to that  is “I’m killin’ myself workin’ and he sthruthin’ about from mornin’ till night like a paycock.”

Their son Johnny (Ed Malone) lives at home too. He’s a damaged lad, having been seriously wounded in the Easter Rising and lost his right arm in the 1922 battle of . When Juno says he’s done his bit for , Johnny replies, “I’d do it agen, ma, I’d do it agen. For a principle’s a principle.”

Mary is being courted by Charles Bentham (James Russell), who brings the Boyles news of an inheritance for the Captain after the death of a wealthy cousin. Liberated from the necessity of going to work, the Captain is ready to celebrate and live according to his new means. Despite Juno’s doubts about their spending, the shabby Boyle living room is soon furnished with gaudy red velvet furniture and a gramophone.

The world of the war continually intrudes upon the Boyles’ life. A neighbor’s son is killed by the partisans and mourned by his mother. And Johnny doesn’t escape the continuing fury of the war that damaged him physically and emotionally.

Pepe directs an outstanding cast. Both O’Reilly and Plunkett shine as the Captain and Juno. Ed Malone, who plays Tommy Owen, a silly character, in The Shadow of a Gunman, is a believably angry man as Johnny.

The Boyles’ living room is designed by Charles Corcoran with lighting by Michael Gottlieb and costumes by Linda Fisher and David Toser. Ryan Rumery is responsible for the original music and Rumery and M. Florian Staab for sound design. Stephen Gabis is dialect coach.

Sean O’Casey, considered one of ’s finest playwrights, was born in the slums and was involved in the Irish Nationalist cause for years. His trilogy focuses on the Irish wars and their impact on the Irish people. We recently reviewed The Shadow of a Gunman, the first play in the O’Casey season. The Plough and the Stars, set at the time of the Easter Rising in 1916, will open April 20. The O’Casey Cycle also includes free readings, lectures and film screenings. More info here.

The three plays in the trilogy run through May 25 at Irish Repertory Theatre, . Buy tickets here.