Performed at the Colonial in 2012 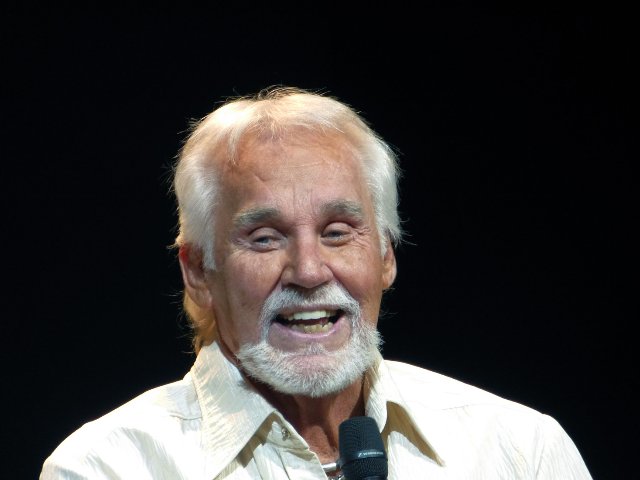 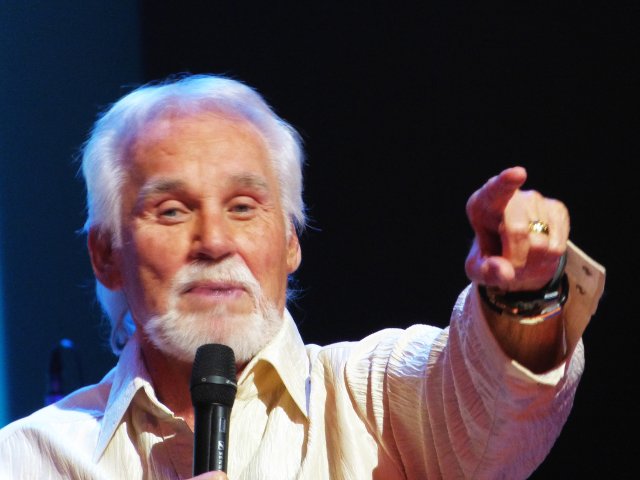 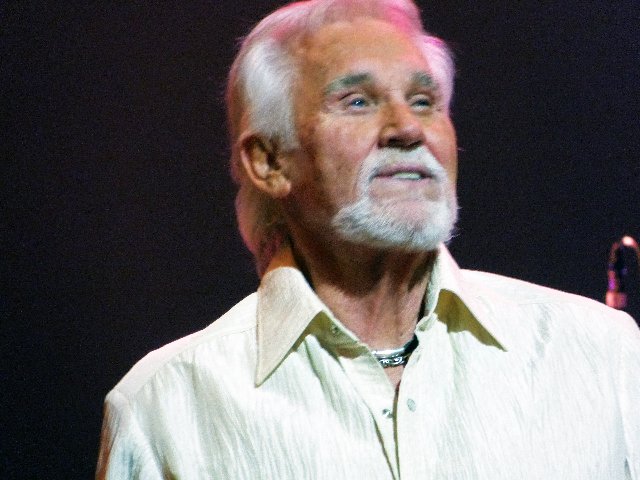 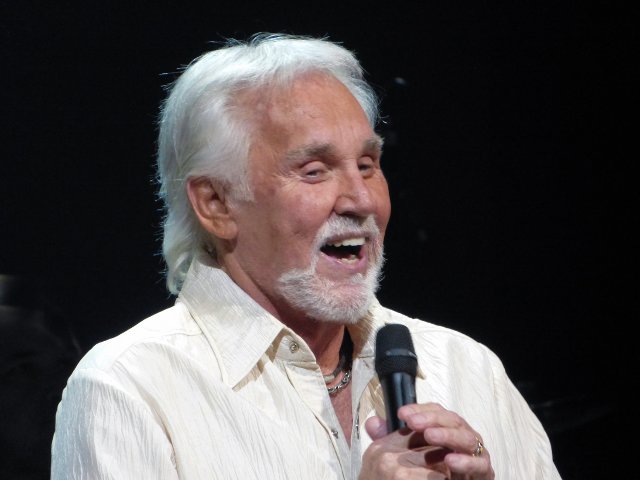 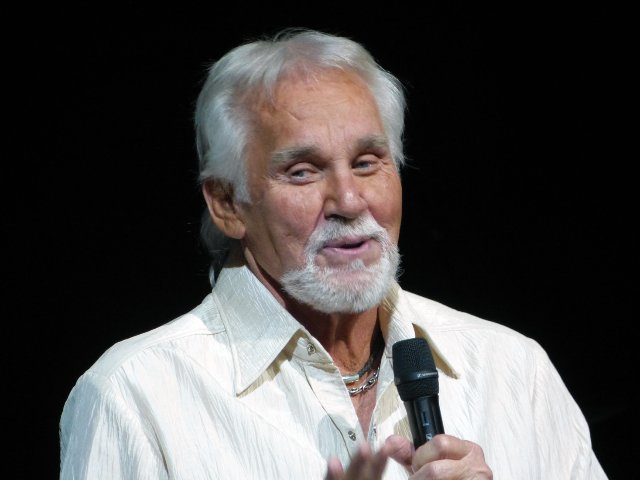 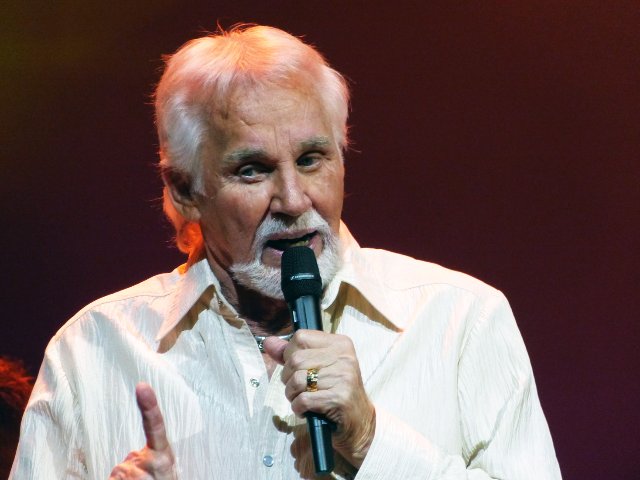 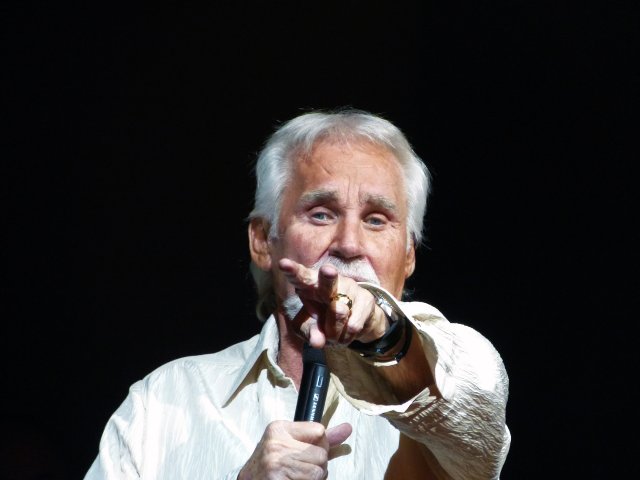 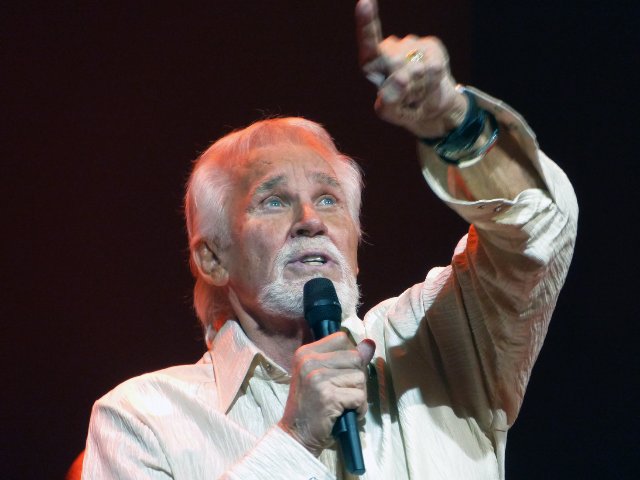 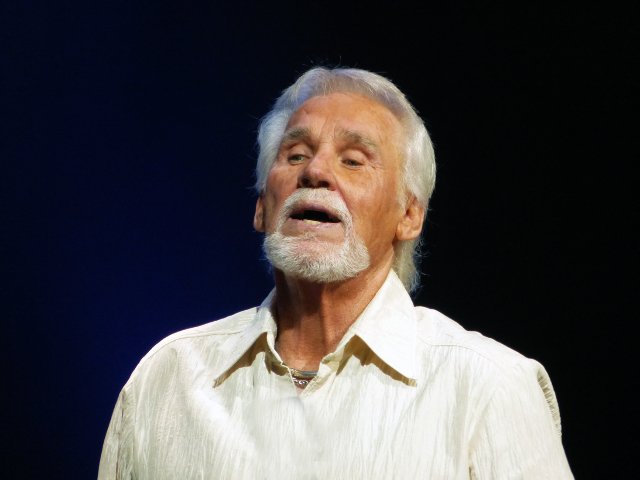 Light years from Nashville, last night, he delighted a substantial audience at the Colonial Theatre in Pittsfield.

With a huge, state of the art, tour bus parked out front he appeared on stage with a superb but mostly anonymous, seven piece band. He only identified fiddle player, Amber Randall, who was accorded a solo. While the two guitarists, Randall, and the bass player were visible behind him, curiously, the drummer and two keyboard players were partly obscured by partitions that only allowed for limited views of their heads.

The message implied that they were little more than session musicians there to back up the lead singer. Pity, as just glimpses of the lead guitarist revealed that he had great chops if let off the leash.

The repression of the top shelf musicians was a signifier of the diva ego and acerbic persona of Rogers who both chatted with, and chastised, the mostly adoring audience. There were more rough edges revealed than just his signature raspy vocals.

Just having a Country star of Rogers’ wattage in the Berkshires was a booking coup and aesthetic benchmark. The conventional wisdom is that there are no Country fans in the Berkshires. Wrong.

Yet again most members of the audience are collecting social security checks.

Including Rogers. Who clearly doesn’t depend on them.

Actually, in a truly bizarre stunt, he was throwing his money away.

Early on in the show he said that there were different kinds of folks who come to his shows starting with the A list of true fans. There were descending catagories ending with bottom feeders who could care less about him but are dragged along by their wives.

After a show of hands for each category he focused on “Brad,” in the second row, who responded to the worst possible category. Doesn’t even like Country music.

Demonstrating a willingness to buy fans Rogers flipped a ten dollar bill to the astonished Brad. As a running gag with the designated rube, he kept tossing folded bills like Frisbees, adding up to a couple of hundred dollars.

He speculated that now that Brad is a ‘fan’ next day he’ll use the money to buy Garth Brooks CDs. At the end of the evening, he tossed Brad a Rogers T-shirt insisting that he put it on. Then he urged audience members to follow him to his car, and beat the crap out of him, if he took it off.

As God is my witness.

While amusing, the running riff revealed a dark side. Picking on one audience member, for the amusement of others, was both arrogant and mean spirited.

Yeah, ok, the audience loved it. Who wouldn’t with a night of all those great hits. The women were enthralled by the silver haired senior on stage. A widow’s dream. And virile to boot as he showed us pictures of his eight-year-old twins.

But I wasn’t expecting this persona. He was somewhere between Mr. Vegas, Wayne Newton, with that polished shtick, and more down home, like the crooner,  Willie Nelson. When he cuts the crap and just sings we truly felt in the presence of greatness.

While swaggering and staggering about you also noted slow, measured, and obviously painful steps. It was telling when he informed us that he will keep performing until they wheel him out on stage. That may not be far in the future given his current state of mobility. But the pipes are still solid. That’s what counts.

Not that he belted out songs. He stayed within the limits of his range. His raspy speaking voice transformed into sandpaper textured vocals that gave a rough edge of humanity and life experience to often remarkably poignant lyrics. Those are unique qualities that have translated into an awesome career.

Rogers has sold more than 120 million records worldwide and recorded more than 65 albums during 52 years in show business. His classics include 24 #1 hits: "The Gambler," "Lady," "Lucille," "She Believes in Me," "Islands in the Stream," and "We've Got Tonight" among them. Rogers' Greatest Hits album has sold over 24 million copies worldwide to date. He has one Diamond album, 19 Platinum albums and 31 Gold albums.

Houston-born Rogers (August 21, 1938) formed his first band The Scholars in the mid ‘50s.  He performed as solo artist Kenneth Rogers on American Bandstand, played stand-up bass in the jazz group the Bobby Doyle Three, and later became a member of The New Christy Minstrels. Rogers and First Edition, scored their first hit, "Just Dropped In (To See What Condition My Condition Was In),” followed by "Ruby, Don't Take Your Love To Town.”

In the 1980s, Rogers' romantic country hits "Through the Years" "She Believes In Me" "You Decorated My Life" and "Lady" — the biggest song of his career — quickly became classics. In 1999, Rogers formed his own record company, Dreamcatcher Entertainment.  For which he had hits "The Greatest," and "Buy Me a Rose" which reached #1 in 2000. His Greatest Hits album has reached 24 million sales. His autobiography, Luck Or Something Like It – A Memoir, will be released by HarperCollins on October 2, 2012.

He opened the hour plus set with “Love or Something.” It was the kind of song about a young stud on the prowl in a bar.

“Liquor and music, a good combination
If you've got love on the brain
I never knew two women who acted the same
Some want a drink first, and some want to just sit and talk
Whoa, oh, it's two in the mornin'
I'm running' and she wants to walk…”

Looking out on the audience he told of special lighting that allowed him to see us. With normal lighting a performer can’t see beyond the first few rows. “You might go home and I’d never know it.”

It is an important aspect of his performance that there is an ongoing dialogue with the audience. When we joined in on the chorus of familiar lyrics he rated our performance. Apparently, Pittsfield wasn’t all that great. Compared to St. Louis the last gig. Or recently in Quebec. "They did better and don't even speak English" he said.

During the song “Stand and Testify” he gestured to different parts of the audience. Two women in front of me stood up briefly. He then praised them and hectored the rest of us. "Didn't I gesture for you to Stand" he said.  Given another shot we all stood and cheered as he finished the song. Then he told us to sit down again adding “I don’t give a damn what you do.”

Hey Kenny, not nice. We know you’re a big star and stuff but…

When reeling off hits like “Through the Years” “She Believes in Me” “Ruby,” well, heck Kenny, you can insult us all you like.

There were laughs and tears when he sang “To Me” with projections of identical twins with his wife Wanda. The images showed Justin and Jordan as toddlers. Being a late dad, hopefully, keeps him out of bars and hitting on groupies.

For the TV special “First 50 Years” he told us of all his pals from Dolly Parton and Sheena Easton to Smokey Robinson showed up to wish him well. “Presumably, there will be another 50 years” he said.

Flashing back he sang his 1967  hit with the First Edition , "Just Dropped In (To See What Condition My Condition Was In).”

Reflecting on that era he recited some of the lyrics.

Amusingly, he commented “They just don’t write lyrics like that anymore.”

Rogers is at his best selling the lyrics of a song. We truly understood the meaning of “Daytime Friends” who become nighttime lovers. Or the need for gestures of love in a relationship expressed in “Buy Me a Rose.”

“buy me a rose, call me from work,
open a door for me what would it hurt
show me you love me by the look in your eyes
these are the little things I need the most in my life.”

Nearing the end of the evening he kicked it up with “The Gambler” including video clips from the five part TV series then the  barn burner “Lucille.”

“This is the part of the show, after ‘Lucille’ when I go off stage, hide behind a curtain, and pretend that I’m not coming back” he said conveying his views on the hypocrisy of encores.

Instead he sat for the moving ballad, his greatest hit, “Lady” given a truly thrilling treatment. The lyrics just ripped through the audience.

"Lady, I'm your knight in shining armor and I love you
You have made me what I am and I am yours
My love, there's so many ways I want to say I love you
Let me hold you in my arms forever more
You have gone and made me such a fool
I'm so lost in your love
And oh, we belong together
Won't you believe in my song?"

Having emptied his pockets of cash there were more party favors and souvenirs. He tossed a dozen or so tambourines to different parts of the audience. They were for the clap along Standing O finale, a scorcher, “Sail Away.”

With that he hobbled off hauling anchor headed for another port in the storm of life.