The Hours by Kevin Puts 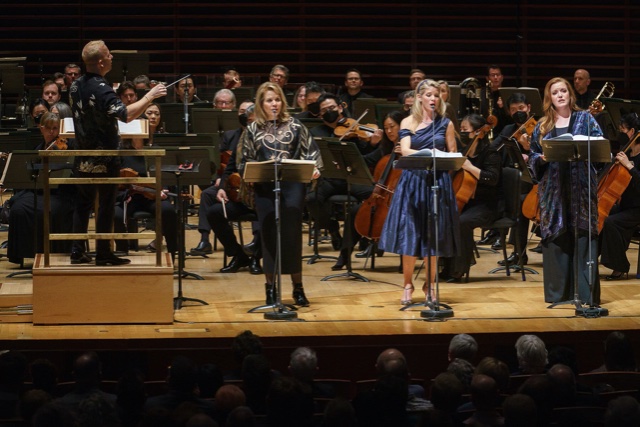 The Hours by Kein Puts premiers in concert form in Philadelphia

The Hours, a new opera by Kevin Puts, previewed at Verizon Hall in the Kimmel Cultural Center in Philadelphia.  The stellar cast featuring Renee Fleming in what we call the Meryl Streep role, Kelli O’Hara in Julianne Moore’s and Jennifer Johnson Cano in the role for which Nicole Kidman, with a fake nose, won an Academy Award for best actress.  Philip Glass wrote the score for the film.  Puts gives us a richer diversity in orchestration.

The film may be better known than the book by Michael Cunningham, who had the notion of giving us three lives interwoven. Virginia Woolf is writing Mrs. Dalloway, Laura Brown is trapped in Los Angeles in 1949 and a current day editor Clarissa Vaughn, preparing a pre-funeral party for her former lover and current love, Richard, who is dying of AIDs, prior to a curative cocktail.

The book is smoothly written, but not a smooth story.  Composer Puts accents the lines in his. We have the chiming of the hours in a day, and also dramatic harsh percussion and string rushes when one of the characters contemplates suicide. The second act is tamer, but may be more of a work-in-progress.

We are not referred to the water into which Virginia Woolf will step with a stone in her pocket to end her life. Yet Puts' opening orchestration suggests water.  The book starts with this moment, as does the movie. This new iteration will focus on Clarissa Vaughn, not Virginia.

Puts has a special gift for writing for the human voice, although as he speaks, you sense his real passion is for orchestration.  Fleming's voice is shown in its full range, displaying her special talent for drama.

As is the custom with contemporary composers, individual vocal characteristics are not developed in individual characters. Their stories are not so different. Virginia is contemplating the end of a life which could not be cured by her Harley Street prescription: drink milk.  Odd that the Woolfs would publish the first translations of Sigmund Freud into English and milk should be the medication.

In The Hours, Leonard (sung by James McKorkle) insistently intervenes in any dark plans Virginia cooks up. Laura Brown, reading Mrs. Dalloway in 1949,  comes to the conclusion that she will not end her life.  She however must escape it, the consequences of which are revealed only at the conclusion of each iteration of this work.

Clarissa Vaughn invites the suggestion of Mrs. Dalloway, whose first name she bears. Her former lover and author for whom she is now editor, can’t let go of the comparison, substituting Dalloway for Vaughn.

The composer, and librettist Greg Pierce, immediately draws a comparison to the novel.  Flowers, flowers, flowers. Mrs. Dalloway is buying flowers for her party. Laura Brown buys them for hers, and Clarissa Vaughn will too. Yannick Nezet Seguin conducting wears a black short-sleeved shirt from which blossom beautiful flowers.

How to deal with voice overs and connective story-telling?  Puts brilliantly has the chorus do the job. The Temple Univeristy choir claimed to have fun singing this important role as a group.

How to deal with the triumvirate of tangled stories?  The characters can neither see nor hear each other until the final moments of the opera. Yet, as one story moves between them, we hear duets and ensembles which work very well.

How a director will  translate these moments will be interesting to observe.  Phelim McDermott is to take on the role.  This bodes well, because he is one of the Met’s most talented directors.  (Satyagraha, Aknahten and Cosi Fan Tutti).

As the opera company plunges into the now and a commitment to produce new work they seem to have an unfortunate inclination to take subjects which are of chamber opera scale and blow them up to the big stage.  Terrence Blanchard's Fire in My Bones was a case in point.  Around the corner they have the Mitzi Newhouse Theater where Intimate Apparel was appropriately produced under Peter Gelb’s watchful eye.  Gelb must be aware of these options,  although he has not displayed great sensitivity to the opera form over the years.  The Hours may be off scale.

This is March and the work opens in November. There may be changes.  It is, however, unlikely that the massive orchestration will be reduced. Puts has created a masterful score.  Talent abounds on stage. Intimacy coaches are being hired, but in a house that seats about 4,000, and on a stage that is 54 feet wide and 54 feet high, intimacy is going to be difficult if not impossible to achieve. Phelim McDermott may be able to bridge the scale problem.

The new Hours is a lovely work focused on despair and the changing attitudes toward sexual identity.