946 by Kneehigh at St. Ann's Warehouse 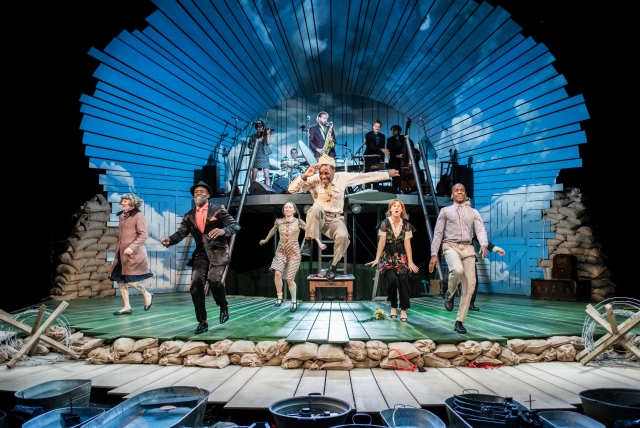 The Amazing Story of Adolphus Tips 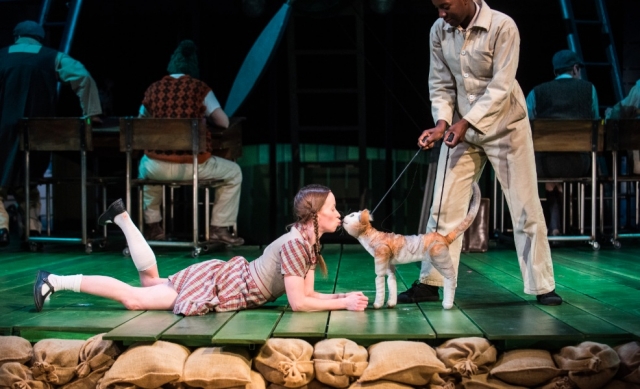 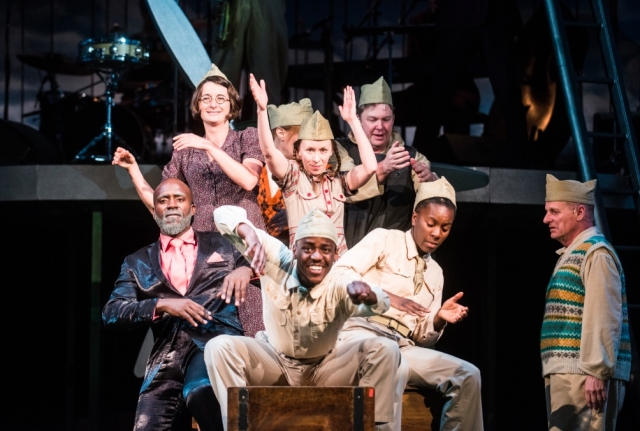 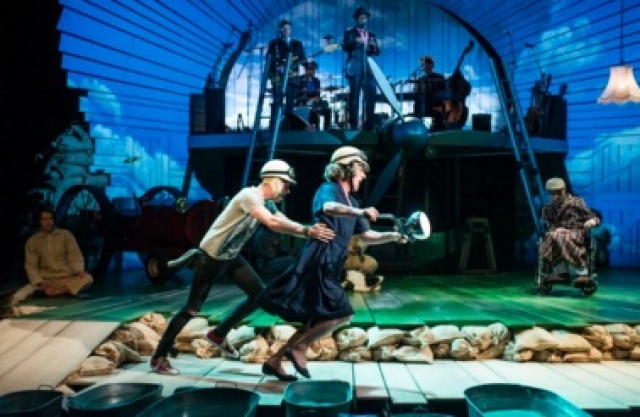 Both young and old enjoy a motorcycle ride. 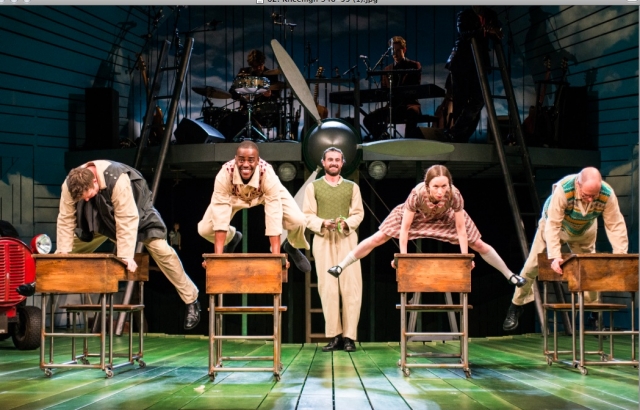 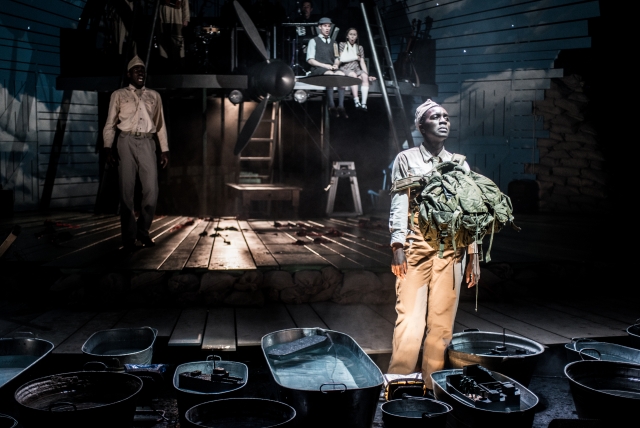 A mix up caused the death of 946 men, some of them drowned by their backpacks 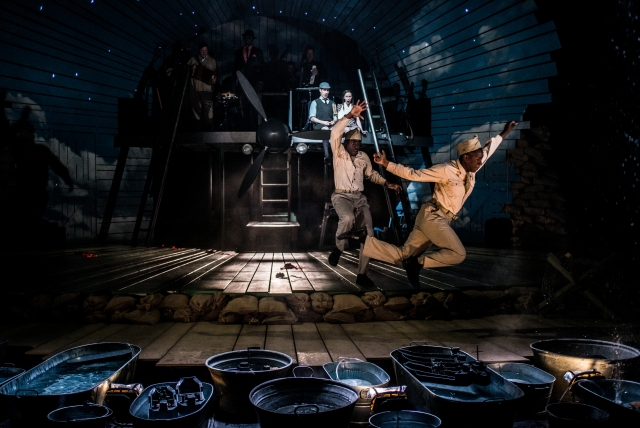 Living it up in Slapton Sands 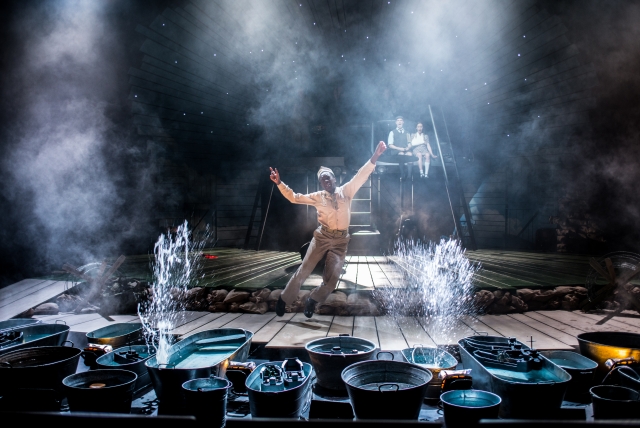 The play of light, dance and music delights

As you enter the theatre at St. Ann’s Warehouse, you are greeted by a Botticelli half shell, tipped on its side. In its center is a protruding platform which houses a double bass and percussion.There is a propeller, perhaps from a World War II British Hawker. It is immobile. During the course of the evening, the propeller will erupt into action as the small British town Slapton Sands, across from Dunkirk, is attacked from the air.

Sound is important to Emma Rice, the director of 946. She often works with Stu Barker. Together they weave songs of the war, and of the black GIs who found themselves preparing for Dunkirk.  We have gospel, jazz and doo-wop. The music is not only the connective tissue of the play but of the human relationships between the Yanks and the townspeople they had to evacuate as Operation Tiger was launched to prepare for the invasion of Europe.

If the shell which embraces the show could be held up to our ear, like a conch found on he beach, we would hear, not the sounds of the sea, but of the drums and bass and then also the rockets red glare, which land as strips of red cloth on the stage floor.

There are so many rich details in 946 that we can’t begin to note them. Hitler and Churchill, stripped to underpants, duke it out in rock, paper, scissors. Old-fashioned school desks are wheeled in to form a dance floor. Tips, a cat belonging to a feisty young girl Lily, disappears during evacuation, but not before we have been utterly charmed by both Tips and her mistress.

You want to go back again and again to be enriched by the emotional impact of the myriad of details and the joy they convey and the sorrow too, for the loss of a parent and a cat.

The working methods of the British Kneehigh theatre group, which produced this play, encourage disciplined improvisation, lively experimentation and teamwork. There are no stars, yet the young lady Lily, who insists on the truth and the return of her lost cat, is striking.

Author Michael Morpurgo was sitting in a bar when he noticed a picture of black GIs carrying furniture in Devon. The bartender told him the back story, of the arrival of the Yanks a year before D-Day, to prepare for the invasion launched from British beaches.

The British and white Yank soldiers had edgy relationships, but the black soldiers and townspeople hit it off. Director Rice speaks of the sense of community which developed. One wishes that this was a global message for today, and yet it seems anchored in the Great generation. That's when American communities were homogenous and the very high stakes invited cooperation, sacrifice and hope. It is hard to feel high stakes today when the enemy is within.

The story is told in loving detail by townspeople, soldiers and puppets. Of course the lost cat is a particularly charming puppet. Puppet chickens from another production are used to interrupt and lighten farm scenes, even when one’s neck is wrung.

Lighting enchanted as the time of day passes and so do weeks. A muffed up tactical non-decision that killed 946 men gives the play its title. Randomness and chance add to pleasure of the story.

Just as Botticelli brought Venus theatrically up from the depths, this little known tale of heroism is brought to a marvelous theatrical experience in the hands of Kneehigh.  It is produced from a child's point of view, but that means one of innocence and joy.   Most of the townspeople who were removed during the lead up to D Day had never been anywhere but home.  We learn the meaning of bravery in this fabulous show.