Escape from the Asylum by Patricia Milton 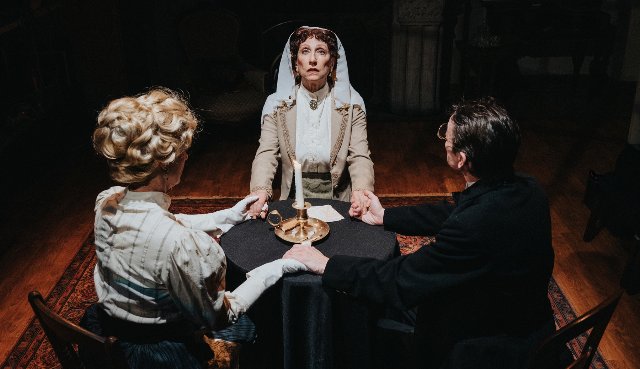 They’re ba-a-a-ck.  Central Works’ Playwright-in-Residence Patricia Milton regaled us in 2019 with the unlikely exploits of three intrepid women in her “Victorian Ladies’ Detective Collective,” in which two middle-aged English sisters and a young American join forces to solve Jack the Ripper type murders in 1895 London.  With her most recent world premiere, “Escape from the Asylum,” Milton provides a sequel that is starting to suggest a series of crime-procedural, period-pieces of the sort that would run on PBS.  Like its predecessor, this comedic play charms with quirky characters, clever dialog, feminist issues, and a plot twist leading to a surprise ending.  The four actors, three of whom appeared in similar roles in “VLDC,” are delightful.

Banderford Clutterbuck suspects that a servant, Rosamund Smith, has been stealing art works from his home and approaches the women to solve the case.  While pursuing information, they find not only is the prospective client’s wife a renowned explorer, but that Clutterbuck has committed her to the Belfry Institution for Nervous Diseases.  The wife, Mahetabel Fernsby, is known to the older sister Valeria, who is certain that Fernsby is not crazy.  In the ensuing verbal clash with Clutterbuck, he withdraws along with his generous financial offer.  Because of their suspicions that he has falsely institutionalized his wife to gain access to her fortune, and despite their own fragile financial standing, the women decide to pursue the case on their own.

The charge to find how Ms. Smith could have stolen well-protected art works and to rescue Ms. Fernsby is led by younger sister Loveday, played by Danielle O’Hare with haughty assurance and determination.  An early feminist, she fancies herself as a leader and produces the dual plans, which include inducing Belfry’s proprietor, Dr. Florian von Grabstetter, an opportunistic charlatan, to reveal useful information.  Valeria, performed by Jan Zvaifler, conducts a fake séance (is there such a thing as a fake séance?) for Grabstetter to “communicate” with Belfry’s recently deceased matron, with whom he clearly had a more than professional relationship.  Zvaifler’s part is otherwise somewhat underwritten, but she captures the stage playing the first-time medium.  With swirling hands, glances of the eyes, and changes in voice and visage, she is terrific as a phony.

As in “VLDC,” Alan Coyne portrays all of the male roles.  Aided by Tammy Berlin’s period costume designs, he differentiates them with skillful discrimination in affect, accent, and voice to make each unique.  His Grabstetter is a stereotypically supercilious Viennese who condescends toward women, extoling quack science theories like the wandering womb to explain female conditions and endorsing a magnetized wooden box contraption to treat them.  Presumably a Freudian, he also imagines every elongated shape to represent a penis.

The remaining sleuth is Katie, specified as a young mulatto American actress, who is a tenant of Valeria’s and always behind on the rent.  Chelsea Bearce brings a bundle of wisecracking fun to the role, often taking the starch out of the sisters and all of the male tormentors they face.  Unlike the other characters who fit in the period, Katie seems contemporary, but maybe that's the only way to get the laughs to roll. In any event, it is ultimately the plucky youth who ties the pieces together to resolve the key question.

Like a proper mystery writer, Milton leaves clues in plain sight that will help solve the puzzle.  But most of us will not grasp the significance of certain elements that would explain how the art works could be stolen from a secured display, or how an inmate could escape from a secure cell.  “Escape from the Asylum” offers a good blend of humor and whodunit to make for a fine entertainment.  Director Gary Graves makes the most of the intimate space and also deserves credit for the dramatic use of lighting, especially given the limited resources.  Finally, to acknowledge a sometimes creative position that seldom gets recognition, fight choreographer Dave Maier designed fencing with umbrellas that is amusing and well executed.

“Escape from the Asylum,” a world premiere written by Patricia Milton, is produced by Central Works and plays at Berkeley City Club, 2315 Durant Ave., Berkeley, CA through April 17, 2022.