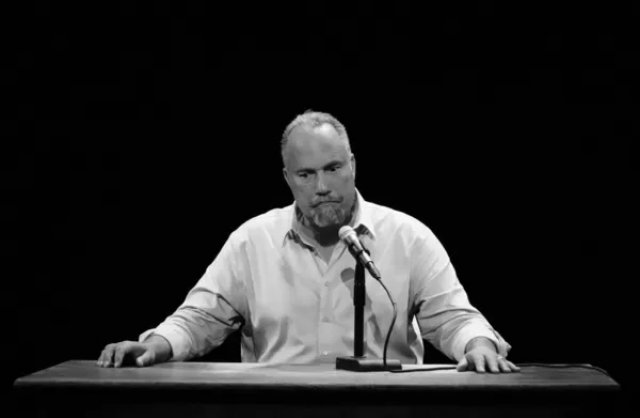 Otto Frank was the father of Anne Frank.  He gave his daughter a blank autograph book on her 13th birthday in which Anne diligently recorded her thoughts and experiences from mundane activities to pathos to hope over the next two years.  Otto retrieved the diary after World War II and had it translated and published.  It would become the biggest selling non-fiction book in the world after the Bible.  In English, its title is “The Diary of a Young Girl.”

To those of my generation, Anne Frank was perhaps the most indelible victim of the Holocaust.  For those whose education may not include thorough exposure to the period, Anne and seven other members of her Jewish family hid in a secret space in Otto’s business offices in Amsterdam from July, 1942, supported by four of Otto’s loyal and courageous employees.  In August, 1944, Gestapo arrested and transported them to concentration camps.  Only Otto survived.

Acting in an engagement in Amsterdam as Rodney King, actor Roger Guenveur Smith visited Anne Frank House.  Moved by her story, he researched her brief life.  While she has been immortalized in print, on stage, and on screen, little is publicly known about Otto.  Guenveur Smith turned his investigation to the father, the result being this solo performance piece.

As Otto Frank, Guenveur Smith sits at a desk with a microphone on a stage darkened, save for a spotlight on the performer.  A haunting instrumental version of “Happy Birthday” plays at the opening.  Otto reminisces about Anne, partly in fact and partly in fancy, as he could only speculate on the final months of his lost family.  Similarly, Guenveur Smith could only conjecture Otto’s thoughts.

Guenveur Smith conveys the anguish of a man forever weighed down with unforgettable memories and emptiness, and the audience is hushed by the actor’s empathetic, commanding performance.  The material, however, is quixotic and can confuse and drag.  Rather than vignettes producing a dramatic arc of anger or fear or redemption, events are kaleidoscopic but without focus.  It’s not always clear whether Otto was present at events referenced (Kristallnacht, the Macy’s Thanksgiving Day Parade?) or why, for instance, the latter is significant.

Anne receives far less attention than one might expect, despite the fact that her writing made Otto known and prosperous.  If there is an overarching theme attributed to Otto’s thoughts, it is man’s inhumanity to man.  His thoughts turn to the devastation of Muslim Bosnia and the courage of Japanese-American soldiers fighting for the United States in World War II, despite their families being held in internment camps.  But the writer/performer’s own social frames of reference dominate – Hitler’s embarrassment at Jesse Owens winning four gold medals at the 1936 Olympics in Berlin, Billie Holliday’s despairing “Strange Fruit” that bore the pain of lynching.  The stream-of-consciousness compilation is of interesting events, but it’s unclear how the viewer assembles the many citations into a definable pattern.

Marshall McLuhan famously argued that “the medium is the message,” which has some parallel in this work.  Guenveur Smith comes from one minority, African-Americans, and his work honors another, Jews.  Often minorities have differing values and clash with one another for resources, jobs, and social pecking order.  Despite the fact that Jews have been highly overrepresented in fighting for civil rights, which overwhelmingly benefit Blacks, anti-Jewishness is not uncommon in the Black community.  Unsurprisingly, extremists such as Louis Farrakhan are unapologetic about their prejudices.  But even moderate leaders like Jesse Jackson reveal their own bigotry, which also undermines their own arguments against the discrimination they suffer.  Against this backdrop, the ad hominem Black messenger Roger Guenveur Smith’s dip into troubled waters is welcomed.