Tech Talk Informs Washburn's 10 out of 12

Tedium of a Play Within a Play's the Thing 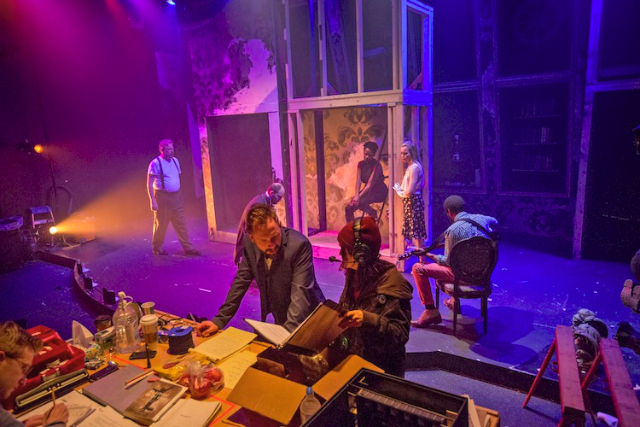 Director (Shane Kenyon) and stage manager (Dado) compare notes while the cast hangs out on stage. Photo by Charles Osgood.

I don’t know if you’ll like 10 out of 12, the new inside-theater play at Theater Wit. But I did. If you love theater and see a lot of it, you’ll enjoy seeing how  theater sausage is made in this look at the excruciating tedium of a tech rehearsal. This is the rehearsal near the end of the production process when the cast and crew go through the play to integrate all the elements: lights, sound, costumes, props, scenery.

Playwright Anne Washburn (Mr. Burns: A Post-Electric Play, produced at Theater Wit in 2015) has spent many long days in tech rehearsals for her own plays and research included visits to many theater companies doing the same thing. Jeremy Wechsler directs this recreation of a tech rehearsal–and a play within a play–and does justice to Washburn’s research.

The title refers to a clause in Actors Equity contracts, which allows actors to work 12 hours with a two-hour dinner break. And that’s a good thing because a tech rehearsal goes on and on and on. There are pauses for adjustment of lights, costumes, sound. There are discussions of whether the female actors should be showing bigger boobs in their period costumes for some unnamed play and whether a table should be moved a foot downstage. There’s eating and drinking and snack crunching. A crew member munches on dried shrimp while wearing his headset. Food, drink, props, paper and other detritus litter the stage and space around the stage, even though the assistant stage manager (Erin Long) does her best to keep the stage tidy.

Dado is the Stage Manager, the key character in the tech rehearsal. We occasionally see her but mainly hear her through our headsets as she calls time or directs various design elements. She calls the cues and keeps the tech rehearsal running smoothly and on time, as much as  possible.

And yes, the headsets. Audience members hear the live dialogue on stage and live comments from crew members, but also hear through their headsets the commentary by the Stage Manager and designers who handle lights, sound, costumes and electric. Several well-known Chicago theater folks are pre-recorded as part of this dialogue. Martha Lavey’s voice directs lights, while Peter Sagal is in charge of sound. John Mahoney, in charge of electrics, also has strong opinions on sandwiches. Barbara Robertson is in charge of costumes and opines on how long it will be before Eva’s skirt is satisfactorily fitted.

Eva in the play within the play (PWTP) is played by Marie (Christine Vrem-Ydstie). Other PWTP characters are Ben (Kyle Gibson), who plays Charles, Siget (Eunice Woods), who plays Lucille and the Old Lady, and Jake (Gregory Fenner), who plays Richard.

Now and then, the actors are on stage in costume and perform bits of scenes while tech adjustments are made.

Shane Kenyon as the director shepherds the action with patience, boredom and occasional frustration about whether he needs to make a decision on the style of a shirt. He prowls the theater, watching the actors in the PWTP and the effect of lights, sound and other tech elements.

Tech rehearsal takes place at the end of weeks of rehearsals by the actors and director, who presumably have spent weeks working out things like how characters act, move and speak. It’s probably not the time for deep analysis of a character’s motivation, as depicted in one very funny scene. Actor Paul (Stephen Walker) who is playing Carstairs in the PWTP, goes off on a long rant about how and why another character is motivated. Finally, director Kenyon stops him and says bluntly, “This is tech.”

10 out of 12 is a love letter to the theater, as (forgive me for quoting myself) I said about House Theatre’s Season on the Line in 2014: It’s a “big sprawling messy exuberant love letter, sealed with a big wet kiss.”

I’d give three out of four stars to 10 out of 12, if we gave stars on Third Coast Review. (But my review on theatreinchicago.com will have that rating.) Anne Washburn’s quasi-documentary will be delicious fun for serious theater fans. If your theater pattern is a few times a year, skip this one.