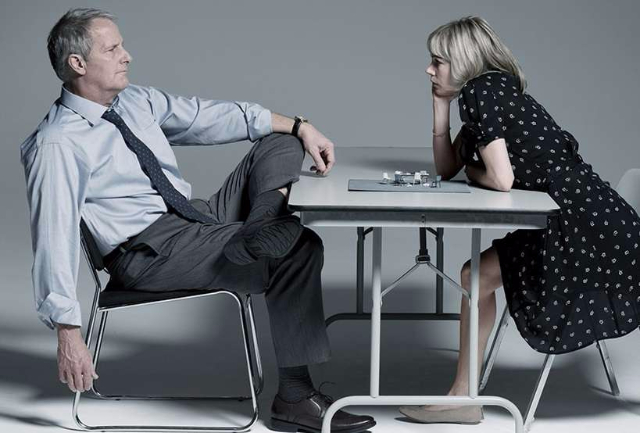 Blackbird is a play with a brutal topic. It entails the long-term damage done when an age-inappropriate romance takes place between a 40+-year-old loner (Ray, played by an overweight, disheveled Jeff Daniels) and the lonely, alienated 14-year-old girl he seduces (Una, played by a fragile and frenzied Michelle Williams).

No one escapes from such a liaison unscathed. The characters in Blackbird had their lives all but destroyed, in part because of what happened at the time of their discovery (Ray went to jail; Una becomes the town outcast). They never had the chance to say “goodbye” or find the truth about what they felt for each other. This left them in limbo for all future relationships. The action of the play takes place when Una comes to Ray’s workplace where they  speak for the first time in a decade.

This should have made for an emotionally charged, heart-wrenching and revelatory experience. Instead, one left  with a feeling of distaste for both characters and the play.  From the moment Williams and Daniels take the stage they are in an agitated, incomprehensible state that simply leaves nowhere to go. By “incomprehensible” that means literally as well as figuratively: It was next to impossible to understand what they were saying at the beginning of the performance. That improved, but was not an auspicious beginning.

Equally incomprehensible was what Una’s agenda was for showing up in the first place. Did she want revenge? Want him back? Just want to know why he left her alone in a hotel room those many years ago? Why he seduced her in the first place? Most people would have an intended purpose if they travel miles to confront someone from their past – even if the confrontation doesn’t ultimately turn as planned.

Una’s intention is totally unclear, and, as a result, her extreme agitation from the outset didn’t ring true. A character out for revenge is usually cool, calm and brutal, simmering with a passion and anger below the surface. There were hints of that later in Williams’ performance, but mostly she, literally, vibrated with emotion throughout the one-act play.

And what about Daniels? If confronted by an unwanted person from his disturbed past, wouldn’t Ray have held back like a coiled spring waiting to see Una’s purpose before panicking? Daniels, however, was in a constantly frenzied state from the outset. Perhaps Director Joe Mantello’s intention was simply to keep the audience on the edge of  their seats the entire time by asking his actors to remain so agitated, but it felt like a poor choice.

The garbage-strewn set does nothing to enhance the experience. It’s just kind of disgusting and distracting; especially when one or the other of the characters starts to “clean up” in a very ineffective way. (How hard is it to just put trash in a bag?). Perhaps that was supposed to be a profound form of imagery for their complete lack of control over the detritus that their lives have become. It is rather gross and annoying so one wanted to get up on stage to help.

Surely Williams and Daniels put their hearts into their performances and certainly give themselves a physical torment. But, given the topic, one expected a workout for heart and head. It was an unnerving experience that left the audience with many perhaps unanswered moral questions.

Blackbird premiered on March 10 at the Belasco Theatre, 111 W 44 Street, NYC and is currently scheduled for a limited 18-week run. Directed by Joe Mantello (The Humans, An Act of God, Glengarry Glen Ross), it was written by David Harrower, and won the Olivier Award for Best New Play in 2005.   Sophia Anne Caruso makes a brief appearance at the play’s end as “The Girl” (Ray’s “stepdaughter?”).