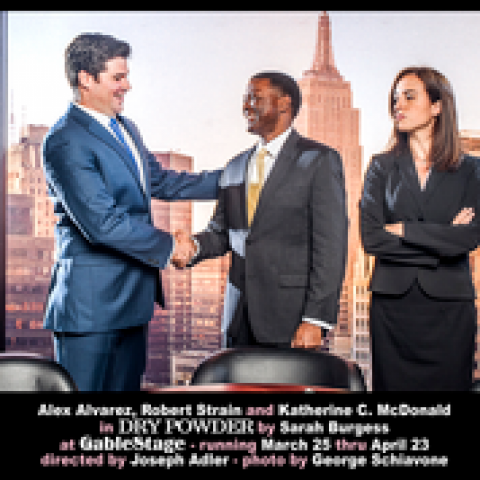 The two characters with opposing views in “Dry Powder,” a scorching, relevant, riveting and unpredictable comic-drama set in the high-stakes world of big-city finance, might as well wear protective helmets and faceguards.

There’s enough verbal combat to leave the combatants bloody and bruised if the power of the tongue had the ability to inflict physical injury.

But those whose lives are facing ruin aren’t the hotshot financial folks working at a private equity firm in the award-winning “Dry Powder,” which is receiving an intense, fast and furious, well-acted and directed southeastern premiere production at the multiple Carbonell-nominated (South Florida’s Tonys) GableStage through April 23. The people whose lives could shatter are the average Joes and Janes, those who don’t come close to neatly fitting into the top 1 percent of earners.

Listen to some phrases in Sarah Burgess’ play (“gutting the American business,” “sucked out of the U.S. economy and sent overseas,” “massive layoffs”) and painful jolts of familiarity course through your body like electrical volts.

Burgess, who doesn’t take sides or offer easy answers, delves deeply into the dog-eat-dog, every-man-for-himself world of funds and finance. If you’re not well-versed in this world, you might find yourself lost at times, especially with the rapid-fire, David Mamet-like dialogue director Joseph Adler implements. There’s barely a pause between lines of the snappy, sometimes sarcastic dialogue and characters speak over each other. The style reinforces the urgent situation at the center of the play and the four-member cast excels at executing it.

The key for audience members is to really listen.

Intently listening is something this cast masters, under the detailed direction of Adler. It keeps the actors, who mostly don’t speak too fast, from appearing as though they’re anticipating their next line, which can be a trap with this type of dialogue.

When they’re not speaking, the actors betray telling facial expressions to convey their reactions to what they’re hearing.

The title of the play refers to money set aside as cash reserves for various purposes.

We’re in present day New York City, in the office of private equity firm KMM Capital Management. The versatile, spacious set, designed by Lyle Baskin, includes a picturesque backdrop of the New York City skyline. It, and the intense, fast music in between scenes, reinforce the high-stakes of the play and rush to accomplish something quickly. The play’s intensity and power is enhanced within the intimate confines of GableStage’s theater.

An attempt is under way to save  KMM from a publicity nightmare – or worse. During the same week KMM forces a huge amount of layoffs at a national grocery store chain, the firm’s founder and president, Rick (an exasperated, commanding and demanding but at times loyal Stephen G. Anthony) treats himself and his fiancé to a lavish engagement party.

Co-managing director Seth might just have a plan to save Rick and the firm from humiliation. If KMM can invest in an American-made luggage company, the firm might not only score a victory but divert attention from Rick’s ill-timed celebration. Then, negotiations and the resultant fireworks begin and questions of loyalty arise.

In the other corner stands Seth (a charming, affable but aggressive Alex Alvarez), whose plan is more worker friendly – and certainly appealing to Jeff Schrader (an at-turns hopeful, optimistic and palpably disappointed Robert Strain), the CEO of Landmark Luggage, the company KMM is poised to buy out.

For all the technical terms and details in the play which the average theatergoer might find hard to comprehend and follow, the play boils down to a conflict: saving jobs vs. the “bottom line,” meaning securing every possible cent from Landmark, regardless of the employees’ fate.

There’s no question that playwright Burgess has a keen ear for financial speak. But she also makes the tension palpable between Jenny and Seth.

The result is riveting, often hilarious theater, featuring a play that looks at a serious, all-too-familiar issue with sarcastic humor and suspense.