A lively production of a cult classic. 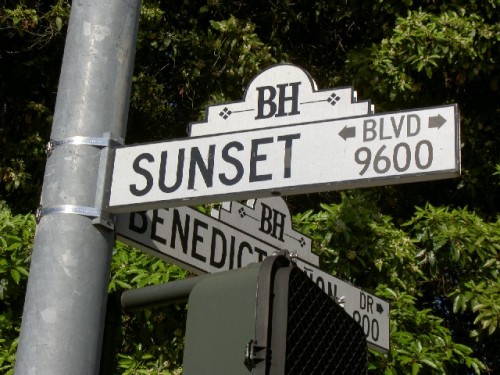 Andrew Lloyd Webber’s quasi-gothic musical “Sunset Blvd” at the Palm Canyon Theatre (PCT) in Palm Springs, California ended on March 24.  The production under the sharp direction of TV star Judith Chapman, who, when she’s not directing, can be seen on the television show “The Young and the Restless”, stars two Norma Desmond’s:  local performers Pamla Vale Abramson and Joey English.  Both stars have their romantic eyes focused on splendid tenor and leading man David McLaughlin as Joe Gillis (the William Holden role in the movie), in this lush and richly textured musical production and story of Hollywood of the 40s and 50s.

The musical based on the movie of the same name, also stars the wonderful Baritone Mark Almy as Max Von Mayerling, the butler and protector of Norma Desmond, a faded screen goddess of the silent movie era.  Newcomer Sarah Noe, boasting a lovely Soprano voice, shines in her portrayal as Betty Schaefer an aspiring writer on the Paramount lot who falls for fated Joe Gillis.  Her duets with McLaughlin are sweet-voiced, and one can feel their on-stage chemistry. The cast of twenty-two talented performer/singer/dancer/actors, bring a freshness and a high level of energy to this “boulevard of broken dreams” show, which Don Black and Christopher Hampton, co-librettists and lyricists have so emotionally hit spot on the nose.  There may be 8 million stories in the Big Apple, but Hollywood and Beverly Hills has Sunset Blvd, “the emotional boulevard of broken dreams” for young hopefuls from all over the world vying for a chance to grab the brass ring, glory, and a career in the movies.  And that trumps the hard-scrabble stories of NYC.

Also featured in solid support are: Luke Rainey as Artie Green, Betty Schaefer’s boyfriend; Tom Warrick as Cecil B. De Mille; (also a great look-alike for FDR); Larry Martin as Manfred; and Nick Edwards as Sheldrake.   In the technical department, J.W. Layne, the resident wizard of Scenic and Lighting Design at PCT, has very creatively integrated a series of projections that moves the on-stage story forward (I detect the fine hand of the director making a request here), not only the story, but the overall visual look of the production.  Layne’s magnificent set design for Norma Desmond’s Sunset Blvd mansion is the visual highlight of the evening.  Great props and set decoration by Nick Edwards enhance the production becoming eye candy for the audience. But I wish some one would turn down the volume several notches so we can hear both the music and the lyrics.

Pamla Vale Abramson is a wonderful Norma Desmond.  She captures the spirit and the essence of the early Hollywood era through use of her marvelous eyes, hand gestures, and actor’s instincts, all the while never losing sight, of her role in bringing a bygone era back, if just for just awhile, for the audience to spend some nostalgia time and appreciate its glorious past.  David McLaughlin’s Joe Gillis brings the right amount of cynicism, brashness, and ambition to his ambivalent gigolo performance.  His strong voice and understanding of his unappetizing character makes his performance one of his best leading man roles to date.  Of course, enough can never be said of Baritone Mark Almy as a performer.  He has been one of the Valley’s leading men and magnificent baritones for many seasons.  His performances and his dedication in becoming the characters he portrays are legendary and are inspirational to his fellow actors, as well as to his audiences.

Director Judith Chapman is a bit of a national treasure when it comes to talent, creativity and dedication to the craft of being a performer.  Her personal vision and directorial touches in this “Sunset Blvd” production are evident everywhere in this show.  The Palm Canyon Theatre has a wonderfully entertaining show for all to see and enjoy.  “Sunset Blvd” ran through March 24th.

Reposted from Desert Local News with permission of Jack Lyons.