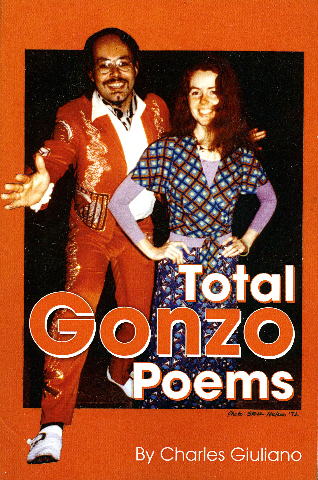 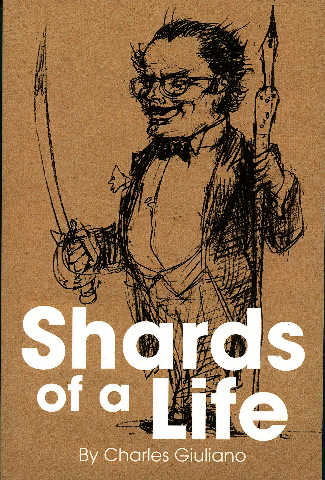 With a reading at Edith Wharton's The Mount, hosted by its director Susan Wissler, in June of 2015 Berkshire Fine Arts, LLC launched Shards of a Life. Available on Amazon it was the first book of poetry by the arts critic, Charles Giuliano.

The eclectic collection ranged from exploring his Italian and Irish family heritage, encounters with the jazz, rock and blues artists he has covered since the 1960s, as well as metaphysical musing.

That collection is now also available as a kindle book.

The second book, Total Gonzo Poems, was previewed with a reading at the Williams Faculty Club in November. It was published in the New Year and is also available through Amazon.

A third book, as yet to be titled, is about to be turned over to the production team of Amanda Bettis, designer, Leanne Jewett, editor and organizer, Robert Henriquez, essayist, and Astrid Hiemer, editor and advisor.

Moving from Boston, in 2006, after careers in the arts and art administration, Giuliano and Hiemer launched the on line arts site Berkshire Fine Arts. In addition to their own writing they manage a roster of national and international arts correspondents.

During the spring and summer Giuliano and Hiemer will visit Cape Ann to further research a book of family history The Nugents of Rockport. They will spend a week in August at the invitation of the Gloucester Writer's Center.

As described and documented in Total Gonzo Poems the ubiquitous word gonzo was coined by Giuliano. He was the first to publish it in a  July 3, 1970 rock review while a staff critic for the daily The Boston Herald Traveler. That piece on "Ten Years After at Harvard Stadium" is included in the book.

With this recent work Giuliano has morphed gonzo journalism into its equivalent as poetry. The approach is hipster fueled, fast, staccato, insightful and amusing.

The books are profusely illustrated with archival family images, portraits and performance shots of artists and musicians, as well as unique photo collages.

As an artist Giuliano has exhibited widely and is included in numerous museum and private collections.

This is what people are saying about the books.

"Charles, I honestly feel I have never read more insightful and meaningful poetry than yours. I love the way you lay clues bare, yet there remains an enigma. This jars a bond with what surprises me by surfacing in my own work. Bravo." Pennie Brantley, artist.

" Just got your book. Wonderful to see this." David A. Ross, Chair, MFA Art Practice, School of Visual Arts.

" I love getting it (Berkshire Fine Arts).  Even though I NEVER leave  Cambridge. You capture the place and I like to know what yr up to. It's wonderful that you transplanted  yr sturdy energy. I got yr book and loved it.  I didn't know ANYTHING.  And the language was a real match. It was you as I remembered you." Elsa Dorfman, portrait photographer.

" Like Federico Fellini, Charlie Parker, Jackson Pollock, Jack Kerouac, and other great innovators in the art world, Charles Giuliano has created his own brilliant form of expression with Gonzo Journalism.  Reading this marvelous collection of poetry brings back those halcyon years of hanging out with a dear friend at places like the Jazz Workshop, Lulu Whites, and the Newport Jazz Festival. What memories, and who better to tell them then one of the coolest and hippest cats I've ever known!  Always a brilliant artist, critic, raconteur, and writer, he has scaled the heights with his latest effort. As Duke used to say: 'We Love You Madly.' " Ron Della Chiesa, PBS Radio broadcaster.

"I’m a big fan of PBS “Finding Your Roots” and host Henry Louis Gates Jr. In your own words, you have provided a look at generations of your diverse clan. As much as I’m a fan of the Beat/Gonzo era I’m drawn (as I see many have) to your family tree. Love the many tales from the backside of Gloucester...lovely, cloistered Annisquam. So many of your tales from the 70’s were not new material to me for me as I like you had lived them firsthand. Of particular delight: Ten Years After in Cambridge, BB King, Don Mclean-Metrano-Delacy caper, Nudie, Castle Hill w/George Kimball, Marblehead, Avatar, and of course Alice Cooper apartment trashing etc., etc. From the pictures on front & back I like you can say age has not been kind. I’m now hovering around 300, bald, and like you bleeding from every orifice...just kidding...not. Hope all continues for you in your room w/a view (RWAV) of the Hoosic at the Eclipse Mill Artist lofts until they come for us..." Roger Lifeset

"In TOTAL GONZO POEMS, Charles Giuliano gives us a photo album reconstructed in words, a Whitman sampler of vital signs and gonzo chocolates. Taking stock of life from the observation deck, he shares a shopping list of memories that make us rethink our own lives. He coined gonzo in 1970 before it got borrowed and co-opted by journalistic pretenders. Well done, my friend!" Arnie Reisman, journalist and Poet Laureate of Martha's Vineyard.

"I have known Charles Giuliano since his graduate student days at Boston University in the 1970s.  But I feel like I have only recently gotten to know him through the family history, memories, and photographs that underlie his poems.  They transcend the reality of his past and place it in context with humor, compassion, generosity, and, even, wisdom.  His 'gonzo' poetry is infinitely readable and totally delightful." Margaret Supplee Smith, Emerita Professor, Wake Forest University.

" Charles is a flaneur of culture, a wanderer into the intimate expression of the times. I have known him as an in-depth critic and writer of cultural scenarios across the board. But, in these books of free form poems, Charles opens up his own personal landscape, wrestling with losses and loves, friends and idols, the fabric of his psyche, nuanced and lucid. His style is rugged, gonzo, ragtag, and often winds up in flashes of beauty. One wants to keep watching!" Jane Hudson, musician and Emerita Professor of the School of the Museum of Fine Arts, Boston.

"Most people feel that the sixties were overrated. If you weren't there then how could you know. Total Gonzo Poems is a birds eye view into an era that equals the great eras of the 20th century. I think the quote is that 'if you remember the sixties you probably weren't there.'  Total Gonzo Poems remembers only too well that amazing time and the era it grew into." Jim Jacobs, dealer in contemporary art.

"Charles Giuliano was there at countless cultural moments, reporting and photographing them, then telling their stories at his Cambridge salons.  Now in Total Gonzo Poems, he brings new insights about them in a unique poetic form, with free-association words and phrases that read like riffs from a jazz guitar." Steve Nelson, producer/ director.

"Total Gonzo illuminates the Irish immigrant heritage of Cape Ann so often sublimated by the Finns, Portuguese and Italians. Thank you for putting us back on the map in full blown color. Mary-Louise Tuvim, special needs educator.

"Currently I am enrolled in a two year course on dreams and learning to lead dream groups. At our last intensive we were fortunate to have Cathy Smith Bower, former Poet Laureate of North Caroline lecture and work with us on creating poetry from our dream images. She stated ' When we craft our experience into poetry  we are setting up a dialogue between the conscious and the unconscious.'  As I read your two books of poetry I love the 'staccato' style; presenting images and symbols that call us to our own lives and experiences. By not filling into too many details we are free to explore our own experiences or places, events and relationships which hearken back for me to my wonderful youth visiting the family on Cape Ann. Maybe it is age, but now I have the time to reflect and heal from the madness of middle life. Last summer, you may recall that we had a horrible shooting in a Charleston church, and subsequently a decision by our governor to take down the Confederate flag. In response to this every guy in my county with a pick up hoisted a Confederate flag and waved it in defiance. One day after coming home from a visit to town I asked myself why am I here? How is it that I feel so disenfranchised from these 'native' South Carolinians?  Trying to understand this I had lunch with a friend whose family has been here since the civil war. She told me her family story and I now intellectually understand but still cannot relate. At about that same time I  heard from Pip about your reading and felt my heart calling me home. Your poetry has stirred a deep need to connect which I was not conscious of prior to last summer. Our story is an archetypal American immigrant story. I am sure this is why your work has been so well received by all who had a relative immigrate to find a better life. I sense this work has been a blessing and healing for you and it certainly has been for all who can enjoy your work. Don't stop!" Leslie A. Flynn, cousin of the poet.

"Reading Total Gonzo Poems reminded me of the great generation of relatives before us, that allowed us to go out and explore, sometimes fail, but always put us back together and out to try again." Kevin Nugent Flynn, education administrator.

"Giuliano’s two published volumes of poems are a memoir of epic proportions--a self-portrait  painted with  witty, poignant, and moving  verses. The poems depict decades of lived experiences: well-known people he interacted with, such as musicians, artists, performing artists, and, of course, his colorful parents and extended family. The verses in these poems are unique in that they do not follow the traditionally accepted formats; instead, they mirror Giuliano’s private, innermost feelings." David Zaig, artist and theorist.

"Charles Giuliano brilliantly captures the worlds of jazz, rock and pop in his gonzo poetry, the tightly woven text supplemented by photos taken over a lifetime of covering musicians and their lives. Writing about how music affects our psyche is notoriously difficult, but Charles makes it look easy. Like a favorite melody, his words capture the complexities of the times we live in. Future music writers will be thankful he set them down in this book." Larry Murray, publisher/ editor, Berkshire On Stage and Screen.

"Wowie. It was like I was there. You caught it!" Edward Rubin, arts critic and Board Member of American Theatre Critics Association.