Cowboy vs. Samurai by Michael Golamco 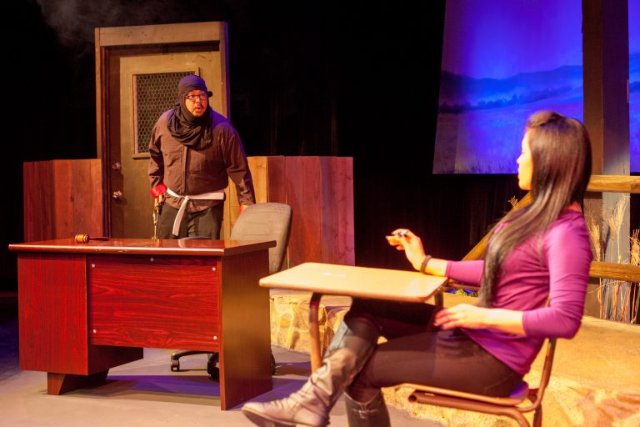 Chester (Chuck Lacson) and Veronica (Heather Mae Steffen) challenge each others’ actions and values. All photos by Michael Craig. 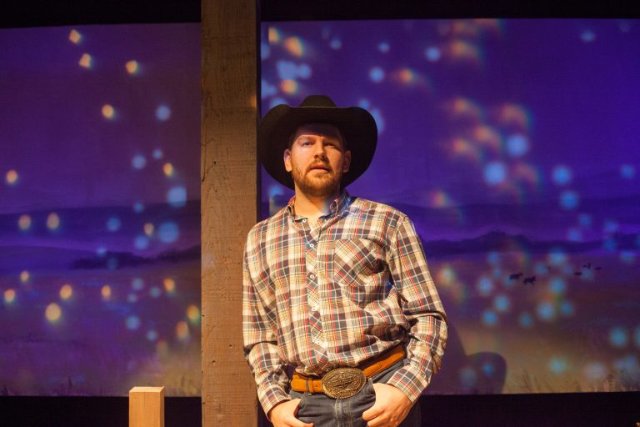 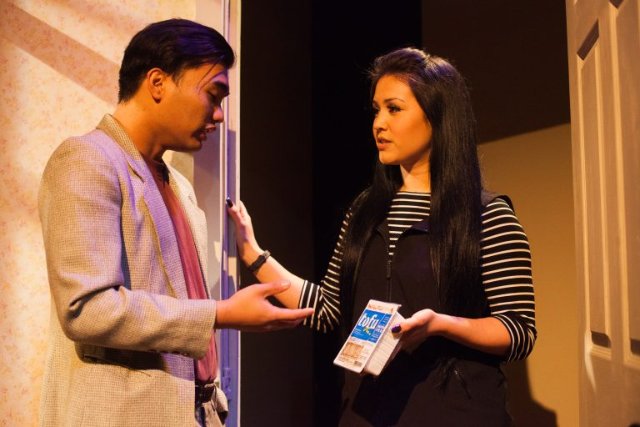 Travis (Lorenz Angelo Gonzales) and Veronica (Heather Mae Steffen) getting to know each other.

The scenario of a young man courting his intended with words prepared for him by another man is a recurring theme in history and in literature. Perhaps Edmond Rostand’s play written in twelve-syllable couplets, Cyrano de Bergerac, represents the watershed for this theme. Cyrano’s romantic millstone is his nose, which goes on for days. In Michael Golamco’s Cowboy vs. Samurai, Travis replaces Cyrano, and being Asian replaces suffering from an imposing proboscis. But there is more than just the romancing to this clever play. Pear Theatre’s mounting of this production is both highly entertaining and touching. It is also full of jabbing reminders that much work is yet to be done on the discrimination front.

The first thing to clear up is that, lacking any cowboy or samurai in the action, the name of the play is a misnomer. Yet the title plays into our assumptions and prejudices. Our tendency to stereotype leads us to thoughtless and mistaken conclusions that damage individuals and societies.

The action takes place in Breakneck, Wyoming, where, until recently, Chester was the town’s only Asian. Trouble is, he was adopted by a white family, and the trace of his ancestry was lost, rendering him a generic Asian. His uncertain identity comports well with much of white America’s stereotyping and inability to distinguish among Asians. Mistakes result from ignorance, such as associating samurais with China.

The only one who doesn’t participate in the romantic triangle, Chester is both clownish and a militant proponent for Asian culture and fair treatment, for instance, railing against the local grocer’s unwillingness to stock tofu. Chuck Lacson endows Chester with overwhelming and brilliant brio. His large frame and disarming but convincing western-southern accent belie his ethnicity and add to his comic aura.

Drew Reitz plays Del effectively as a well-intended, somewhat dim off-cowboy. That is, he looks like a cowboy, except for the tennis shoes in place of boots, but he knows that the era of that historic archetype has passed. Reitz captures Del’s whimsical nature and his quiet realization that opportunities to make something of himself have passed him by as well. But something new has brightened Del’s outlook. He has fallen for school teacher Veronica (Heather Mae Stefen) like a rodeo dogie lassoed to the ground. This New Yorker recently arrived as part of a trial program to get teachers into areas of need. Oh, yes, she is Korean American.

So the intellectually underpowered, tongue-tied Del turns to his friend Travis (Lorenz Angelo Gonzalez), an English teacher, to write letters on his behalf to Veronica. Travis had escaped Los Angeles a couple of years earlier because of a break up with his fiancée, and he too is taken by Veronica. However, it turns out that she has a history of dating only white males, and he is….Korean American, like her. So if Veronica is prejudiced against him, Travis decides that he can at least help his friend.

If the above seems like a lot of plot revelation, it’s just the set up! Machinations of the complicated personal relationships ensue. More importantly, and an enhancement that this play has over Cyrano, is that a raft of hilarious and racially charged incidents intertwine with the romance, involving Chester at the center. See Chester as the ludicrous and militant president of the two person Breakneck Asian American Association. And see him purloining a relic that he associates with Asian oppression. And more. An interesting structural element of the play is that none of the real or perceived instances of interracial prejudice appear on stage.

Director Jeffrey Lo keeps the pace moving in this spirited play. Lighting is active, often targeted and has the effect of broadening the stage. Sound comes to force as a selection of popular and appropriate tunes that fill the many unlit transitions between scenes. Staging is simple, but its backdrop is a beautiful original mural of the plains. Acting excels in the high energy scenes but can be a little clumsy and short of panache in the more subtle episodes.

Cowboy vs. Samurai peeks into the hearts of its characters, who seek identity, self-actualization, and love. In all, it provides stellar entertainment in a creative and thoughtful package.

Cowboy vs. Samurai is written by Michael Golamco, produced by Pear Theatre, and plays on their stage at 1110 La Avenida, Mountain View, CA through April 8, 2018.