Produced by Custom Made Theatre 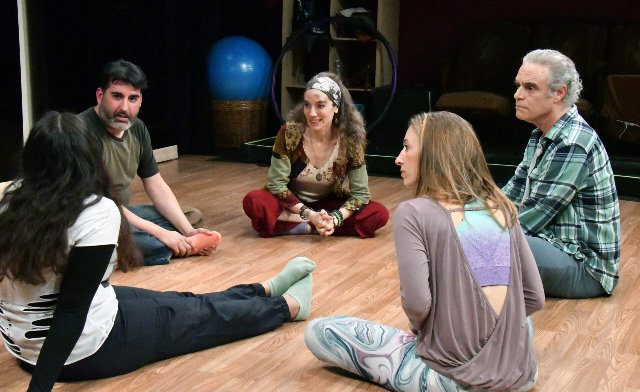 Mastering a skill is often an arduous and indirect process.  Recall “The Karate Kid’ in which the sensei, Mr. Miyagi, makes his student, Daniel, wax cars and paint fences with very precise, repetitive motions and hold the crane pose for extended periods long before he ever practices a karate air chop.   In “Circle Mirror Transformation,” Marty teaches an adult acting class at a community center.  After sessions of numerous obliquely relevant exercises, Lauren, the only teen in the class, pipes up, “When are we going to do real acting?”  By Lauren’s definition, they’re not.  But happily for the audience, it gets to observe and enjoy the lessons, and the actors in the play do a wonderful job of making it entertaining. The playwright also develops a parallel track about the characters' lives that enhances the narrative.

Annie Baker has established herself with a naturalistic stream of plays, including the trilogy taking place in the town of Shirley, Vermont, of which this play is a member.  These are narratives about ordinary people doing ordinary things, often written and acted with such uninflected manner as to elevate boredom and long silences as virtues.  But even when the action is subdued in “Circle Mirror Transformation,” backstories and offstage events divulged heighten the tension.  Fortunately, in this meta-acting play, varying emotion and gesticulation are what it is all about, so even the naturalistic approach results in theatricality.

The dramatic training that the participants receive serves a number of purposes including creativity, confidence, concentration, memory, spontaneity, timing, and most importantly, conquering inhibition.  One of the more directly relevant drills is the interpretation exercise in which two characters repeat the same exchange of lines like “I want it,” and “You can’t have it,” with varying affect.  It demonstrates well how different rendering of words and movement yield very different sense of meaning and emotional response for the viewer.  In another, they have to try to convey feeling and action in an interchange while one can only verbalize “goulash” repeatedly, and the other repeats “akmak.”

The classes take place over six weeks, during which we learn a bit about the characters from their pre-and-post class interaction.  One of the exercises serves a dual purpose in the play when each character presents a bio of another.  The delivery acts as a window into the perceptions of how the speaker feels about the subject of the monologue, sometimes to the surprise of the latter.  Factually, we learn that Marty and her previously married husband James, also a class member, are having issues.  The diffident Schultz, who feels that as a recent divorcee, he is a failure, while the assertive Theresa, who is always stretching her limber body, also broke up with her boyfriend recently.  The otherwise reticent Lauren discloses discomforting family problems at home.

The characters also develop connections during the six weeks.  One relationship develops and feelings arise by one character for another, but they are not reciprocated.  The two shy members, Schultz and Lauren both open up and become full participants in the group.

Sometimes raw nerves are exposed.  When Lauren and James are portraying Theresa and her ex, Theresa intervenes because the scenario becomes so realistic and painful.  But the big denouement comes with the exercise in which each person is to write down a secret that has been previously shared with no one else.  Although the process to reveal the secrets is intended to be confidential, it would become clear that in a group of five, it can be hard to hide.

All five actors (David Boyll, Brenda Cisneros, Lauren Dunagan, Emily Keyishian, and Alfred Muller) suit their roles ideally and acquit themselves with flying colors.  Director Ciera Eis keeps the action moving and ensures the characters are involved, resisting the drag that can occur with some productions of Baker’s works.  Lighting Designer Weili Shi creates considerable visual drama with spots, floods, and frame illumination for the large mirrors in the set to compensate for the spare staging.  The play offers the viewer an interesting look into the learning of a craft and a brief but penetrating view into the lives of a group of people drawn to it.

“Circle Mirror Transformation” is written by Annie Baker, produced by Custom Made Theatre, and plays on the stage of Phoenix Theatre, 414 Mason Street, San Francisco, CA through April 16, 2022.