Written and Performed by Alaudin Ullah 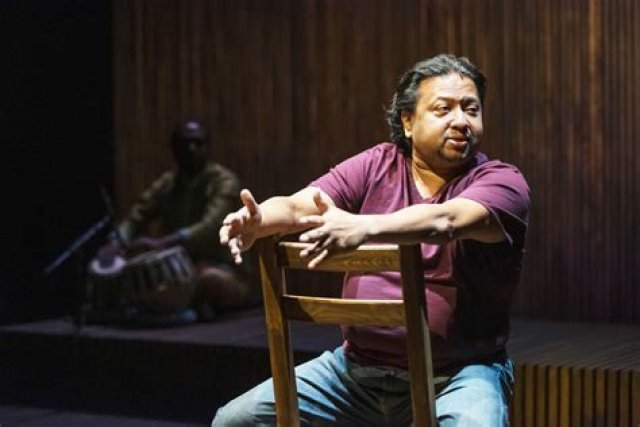 The immigrant experience is remarkably similar for generations of immigrants coming to . From being confined to low-paying or back-breaking jobs, to discrimination based on stereotypes about national origin or religion, to learning the language and realizing that some of your heritage is disappearing, each group of immigrants has dealt with these. Yet often these stereotypes and discrimination don’t disappear; sometimes they just mutate into different forms.

Dishwasher Dreams now at Hartford Stage through Sunday, March 20, looks at that through the lens of two generations of an immigrant family. Written and performed by Alaudin Ullah, it is filled with humor but also sharp observations. Ullah was a ground-breaker as one of the first East Asian standup comedians who gained wide appeal.

He intermixes the story of his father, Habib who emigrated to the from what is now , but was then known as East Bengal, a part of . He settled in Spanish Harlem, got work as a dishwasher, but later went on to own one of the first Indian restaurants in NYC. When he felt his partners were taking all the money, he went back to dishwashing.

His son, Alaudin, was born later in his life. Alaudin grew up totally American, loving the NY Yankees, American food and comedian George Carlin. In fact, Carlin was his comic ideal.  Alaudin managed to forge a career as a comedian and actor with appearances in films and TV. Now he is mainly a writer.

But if Habib faced stereotypes and prejudice as both a Southeast Asian and a Muslim, Alaudin found that only wanted him to portray terrorists and autocrats. The scene of him practicing lines for an audition is both funny and disconcerting. The role is a terrorist leader.

As a comedian, Ullah can command the stage and control an audience. He jumps from his father’s story to his own; though, he does not neglect humor. As many immigrants have done, humor can take the edge off the rough patches.

One of the most intriguing stories is his father’s friendship with Sidney Poitier, who worked alongside him as a dishwasher. To Habib “Sid” was just another immigrant.

The 90+ minute show opens with Avirodh Sharma, playing the tabla, twin hand drums from the Indian subcontinent. Sharma is a master of the percussive rhythm and quickly not only sets the mood but gets the audience involved with rhythmic handclapping. Throughout the show, his skill helps to highlight and reinforce moments of the work.

A particularly poignant moment comes when Alaudin, after years of trying, convinces his mother to go to Yankee Stadium for the last home game before its renovation in 2008. As he describes his proper Bangladeshi mother doing the wave, you can’t help but feel the warmth of his family.

That story as well as the one about his father’s neighbors on the same floor as his apartment – each from a different culture – emphasizes how are stories alike in some essential way. I’ve often thought of the journey my grandparents made and the transitions and adaptions they made.

is welcoming refugees from and soon will welcome some from the . It is a good reminder that while we may speak different languages, have different religions, and eat different food, each group immigrants has the same experiences.

Given all that is going on in the world today, and the politicized debate over immigration, Dishwasher Dreams is a good reminder to be our best selves.

For tickets visit HartfordStage.org. The production is in association with Writers Theatre.