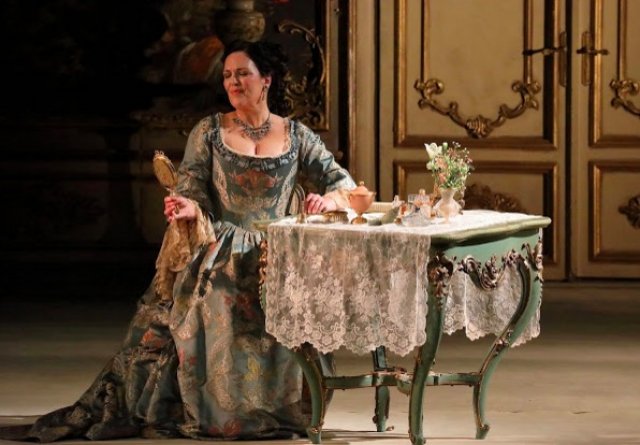 Table for one: Adrienne Pieczonka as the Marschallin in Der Rosenkavalier conducted by Kirill Petrenko at Carnegie Hall.

Richard Strauss' Der Rosenkavalier is his most beloved opera. Strauss fused rigorous compositional technique, catchy waltzes and superb vocal writing  to a charming, sentimental libretto by his longtime collaborator Hugo von Hoffmannsthal. On Thursday night, the Bayerische Staatsoper brought this opera to the stage of Carnegie Hall under the baton of its boss Kirill Petrenko. This was the opera company's first concert performance at the New York venue in its long history.

Rosenkavalier immerses the listener in the bedroom games of 18th century Vienna, sort of like Les Liasons Dangereuse if all of that play's characters were decent and noble people. The most noble of these is the Marschallin (Adrianne Pieczonka), a Viennese princess and the wife of the Field Marshall of Austria. Her 17-yeear-old lover Octavian (Angela Brower) falls head-over-heels for the daughter of a rich arms merchant. The catch: Sophie is engaged to the boorish Baron Ochs, a blundering, bawdy figure who may be the Strauss-Hoffmannsthal team's greatest comic creation.

This same cast sang the opera in Munich earlier this month. Adrianne Pieczonka was a vocally flawed and dramatically excellent Marschallin. She sounded harsh and strained in her first scenes with Ms. Brower's Octavian, producing a harsh and metallic tone when tenderness is required. The soprano settled in for the second half of the act to sing a beautiful and thoughtful monologue. (Apparently imaginary hairdos can work wonders.) She was much better in the Act III trio but one sensed that she was pushing the outer limits of her instrument. However, the soprano had the presence required for the part, and that compensated generously for her vocal flaws.

Angela Brower was a brash and funny Octavian, freed of the constant costume-switching that is required of this complicated character. She embodied youthful energy and raging hormones in the first act and yet also brought across the sense of magic and instant connection with Sophie von Faninal in the Presentation of the Silver Rose. Her accent switch (when disguised as the maid "Mariandel", Octavian has to affect a guttural, provincial Viennese accent) was flawless. In that disastrous Act III date, the singer broke the fourth wall, and gawked at the sold-out Carnegie audience and the beauty of the hall itself. Brilliant.

As Sophie, the young woman who steals Octavian's heart, soprano Hanna-Elisabeth Müller is the real deal, a singer with a sweet, silvery instrument that has some "ping" at the top. She was also unfazed by the dramatic issues of a concert performance, painting a portrait of a fierce and independent young lady who's had enough of creepy self-centered old men like Faninal and Ochs. In the famous trio and duet that ends the opera, she sang with great clarity and purpose, a silver lining on the rolling clouds of Strauss' orchestration.

The same cannot be said for Peter Rose, the evening's Baron Ochs. While Rose is a fine comic actor his voice was clearly strained in this long and taxing part. His Act I speech to the Marschallin (in which the greedy old bastard describes himself ravaging country lasses) was curiously bland. Not even the showy bit of holding the last note of "Mit mir" after the orchestra stopped playing could save him. In Act III he was all bluster and thumbs, and cuts taken in the third act seemed to rob him of dramatic momentum. It was a relief to see him chased offstage so the singers could get on with the trio.

This opera has a huge supporting cast although the concert setting meant that characters without lines (Mohammad, Hippolylte, Leopold) were simply left unseen. However the singers that did appear were very good indeed. Leading the pack of players was Markus Eiche as a cynical Faninal, Sophie's father. Lawrence Brownlee did the Act I honors as the Italian Singer, and his comic timing made the moment when he is rudely interrupted by Rose one of the highlights of a long evening. Bass Peter Lobert gave a good account of the Commissar and may be a singer to watch. Kirill Petrenko gave a rough and ready account of the score, that like Pieczonka's performance, improved as it got deeper into this magical score.  (Reprinted with permission from Superconductor.)