Yerma at the Park Avenue Armory 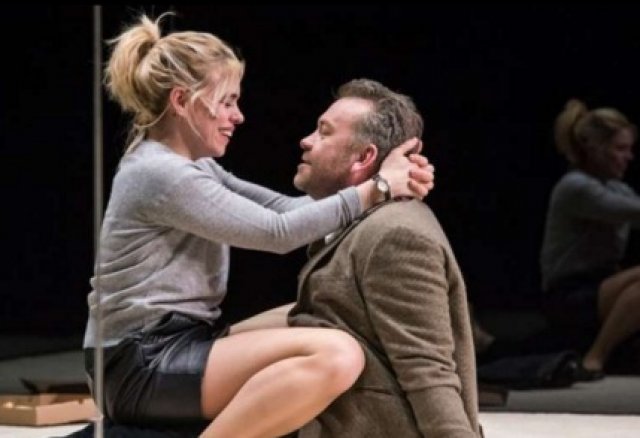 Yerma inspired by Frederico Garcia Lorca, written and directed by Simon Stone, is produced in a glass house poised in the middle of the Drill Hall at the Park Avenue Armory. It is a transfixing work. Billie Piper’s Olivier-winning performance is justly celebrated. All the cast members contribute to the wrenching drama.

Entering the Armory is its own reward. The building’s interiors are gorgeous. The Veteran’s Room is one of the few interiors remaining that was designed by Louis Comfort Tiffany.

In contrast, Yerma is produced in a glass house dropped down in the middle of the Drill Hall, the Armory’s largest space. Philip Johnson’s structure has a view interrupted by containers for the plumbing. While Yerma is a play about human plumbing, its glass house has no obstructions in the audiences’ view. Instead the exterior of the walls reflects the interior. To befuddle the audience, it may also reflect us. But no, that is another bleacher across the way that we are viewing when the lights are right. As the theater darkens for the play to proceed, we are all absorbed in the interior of the glass house.

People who live in glass houses should not throw stones is subtly suggested here. Yerma is now “Her”, a magazine editor who writes a popular blog, whose hits dip as low as five per day before she starts writing about her effort to become pregnant. Readership whips up to 3000 and without consideration, Her begins to write about her sister and husband with no reservations about exposing innocent parties with her pen, or keyboard.

From the start, we are not offered appealing characters. They trash gays and people not as fortunate in their paychecks as John and Her. It is this stance that makes the play difficult to take beyond the obvious uncomfortable topic. Lorca's play was carried by his poetry.  The dialogue here is often snappy. Cross talk adds to the texture.  It does thoroughly engage.

Stone reports that he was trying to present a universal every woman character. As a woman who is out there in the world, I recognize that he has hit a mark. Sensible women in search of pregnancy stop their pursuit when their marriage is imperiled. Her persists, as many women do.

As Her begins to obsess, John becomes a more and more sympathetic character. If he does not clearly love this woman who becomes his wife during the course of the play, he is deeply involved with her. He recognizes her need and tries to accommodate.

What makes Her a less than appealing character is that the set up for her parental wish is not presented with conviction. The idea of a child flashes across her mind and she latches on to it and sticks.  At first the fact that it makes good copy drives her. Later she is simply driven by an idée fixee that she can’t let go. It grows like a cancer on the marriage.

There is clearly an audience for the ugly characters of Neil LaBute. I am not part of it, and this is my prejudice.

What I loved about the evening was my placement in an alternative theatrical space, one in which I am engulfed by sound at the same time I am kept away from the characters by a glass wall.

Credits for the music are not given, but we appear on one level to be participating in a ritualistic mass. From early medieval choir sounds to music like the Missa Luba of Africa and on to the cacophony of some modern music, musical dividers between scenes heighten the drama.  There are also filmic black outs between scenes.

Because the characters are in a glass box, lifted only after the final moments of the play when curtain, or rather “wall” calls are taken, the actors are miked and their speech is both magnified and tinny. We are distanced as the intensity of the emotional interactions magnifies.

The setting also looks like a diorama at the Museum of Natural History. I came away hoping that this universal desire of women to bear fruit might have a happier ending in another century. Then characters like Her and John, Her’s mother, sister, former lover and assistant might be frozen in a diorama for future humans to stare at in wonderment over the bizarre lengths that modern medicine went in the 21st century to realize wishes and dreams.

Her’s ending may be exaggerated, but so many women time has passed by and against the advice of physicians, undertake hormone replacement to bear the children. Their marriages collapse under pressure and many of them die of a cancer that cannot be controlled. One hopes that the message of this play will be, adopt.