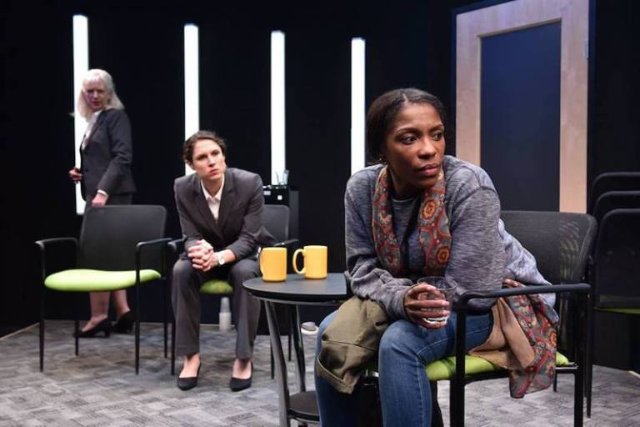 Armour, Pappageorge and McClain as 2, 1 and 3. Photo by Michael Courier.

We sit through 60 minutes of ambiguity and tension—about what? When hang finally reveals (almost reveals) its essential point in the final 25 minutes, we are caught up in the conversation among three people in a small room. It is devastating–and maddening.

I won’t divulge the details—and even the denouement is ambiguous—that end this gripping play by debbie tucker green at Remy Bumppo Theatre. The U.S. premiere of the play by the British playwright (who spells her name and her play titles with lower-case letters) is directed by Keira Fromm and performed by three talented actors.

hang is set in a nondescript government meeting room, where two officials identified as 1 and 2 (Eleni Pappageorge and Annabel Armour) arrive, dressed in gray business suits, and accompanied by 3 (Patrese D. McClain), wearing jeans, sweater and coat. A great deal of time is spent by 1 and 2 discussing beverage options and meeting arrangements. Does 3 want to wait for her husband? (He’s not coming.) Does she want her friend Suzette who came the last time to come? (She’s not coming.) Does she want to phone someone? (No…. I’ve been here before…. I know how this works.)

In oblique, opaque discussion, some elements of 3’s situation trickle out. She apparently suffered a physical attack in the past and this meeting is meant to discuss the follow-up. There are suggestions of racism throughout. 3 (a black actor and specified in tucker green’s script as black) describes her attacker as blue-eyed. There are topical themes of criminal justice and retribution.

Under Fromm’s expert direction, all three actors excel in building and sustaining the tension. McClain is intense, sorrowful and angry and never misses a beat as her victimhood is revealed. Both 1 and 2 are proper bureaucrats, never deviating from their solicitous script, with 2 occasionally providing a comic, dithering note. Her recital of follow-up options (with details) is funny and horrifying.

hang is the final production in Remy Bumppo’s 21st season for which the theme is “21: Truth Be Told.” It’s a visceral and dramatic contrast to the other two plays: the brilliantly zany and prescient The Skin of Our Teeth by Thornton Wilder and the ornately costumed Puff: Believe It or Not by Eugène Scribe.

Playwright tucker green worked as a stage manager for 10 years before beginning to write plays. She’s author of a dozen plays, most of them produced at the Royal Court and the Young Vic in London. She also wrote and directed the film Second Coming, for which she was nominated for a BAFTA.

hang by Remy Bumppo Theatre continues at the Greenhouse Theater Center, 2257 N. Lincoln, through April 29. Tickets are $42.50 – $57.50 for performances Thursday-Sunday with some Wednesday performances. Buy tickets online or call 773-404-7336.