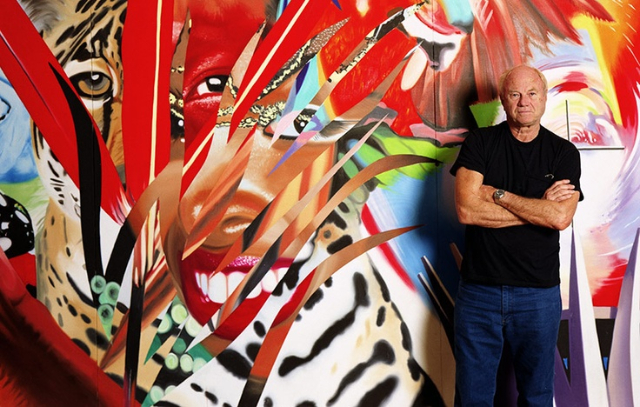 Rosenquist Swimmer in the Econo-Mist 1999. Courtesy of MASS MoCA. 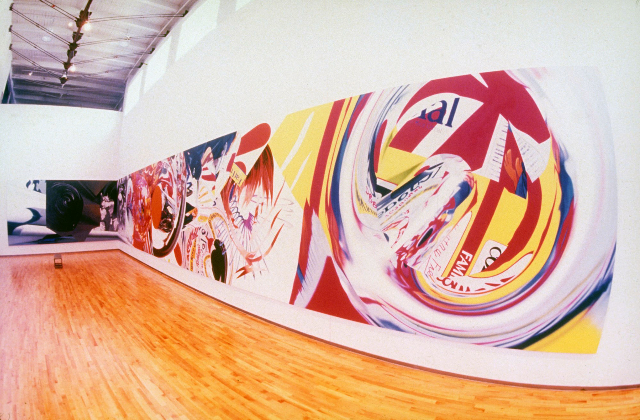 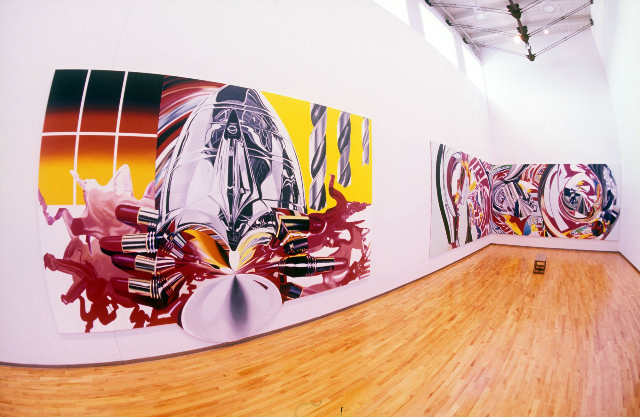 There was an immensity to Pop artist James Rosenquist from epic scaled paintings, like his seminal multi-paneled F-111 (1964-65), to passionate embrace of a life lived large. He died this week at 83.

It was a Saturday afternoon opening at the townhouse gallery of Leo Castelli that I was introduced to him by my friend Jim Jacobs. In the spirit of Pop which had hit the 1960s art world like a tsunami, the balding, lanky artist with low key, ersatz, lumpen-proletariat charm was wearing a paper suit.

Prior to that I ran the cooperative Spectrum Gallery on West 57th street. Jacobs and I had been interns at the Museum of Fine Arts in the adjoining Classical and Egyptian offices. As Cornelius Vermeule, the eminent classical curator put it, I was one of the Gypos.

We had found our way to New York to make our fortune. Jim asked my opinion on the best contemporary gallery in the city.

Shortly after that he was working for Castelli and Ivan Karp.

When my gallery closed for the summer I went on unemployment until September. Needing extra cash Jim hooked me up to work with Rosenquist as a studio assistant.

Mostly that entailed cleaning up after marathon creative binges. McCain, his primary assistant,  helped with the technical work. Now and then there were special projects like creating “Medals” a series of large, horizontal “abstract” paintings. They were attached to the side of a flatbed truck as part of a demonstration/ march in protest of the Vietnam war.

I wanted to use tape to get the lines straight. Jim would have none of that nonsense. Just paint them freehand was his order.

On another occasion we stretched a series of small canvases silkscreened with the floor plan of a suburban home. The project was to punch holes and string them with electric wires. A crew of us attached light sockets and wall plugs. They were transformed into chandeliers.

Now and then we made sculptures. Jim had lengths of barbed wire chrome plated. These were twisted around rustic wooden armatures. With neon inserted they became “Tumbleweeds.”

It amused me that when he wrestled with the barbed wire the chrome mostly flaked off. There was the issue of getting them out of the studio. The solution was to drag them up to the roof and lower them to the street with ropes. Being afraid of heights that was a scary job.

Often he had a farm hand’s resourceful approach to challenges.

He hired McCain and a couple of other cowpokes to work on his house in East Hampton. We dug post holes for a fence and pulled out stumps to clear the land. This entailed using chain attached to the rear axel of the car. I wondered which would give first the stump or the car.

There was a running fantasy that he was the boss of a crew. He referred to us as the “men.” When going for supplies on Canal Street, for example, he would say “Ok men, spread out and shop lift.”

That worker MO was essential to his self image and world view. Even though he was an art world celebrity he preferred to be just one of the guys. He liked Andy but never hung out at Max's.

For McCain and the other guys it was just a job. But I wanted to know what made him tick. On the rides to East Hampton I drew him into talking about art. At first there was some resistance that one of the men asked him difficult questions, particularly about his early abstract work, how he transitioned to Pop and, heavens to Betsy, what it all meant.

In the back seat I discovered philosophy journals and confronted him about that. After some digging he talked about Zen and Buddhism and interest in mandalas.

We talked about Matisse, particularly the late work, and the paper cutouts. To the art world he projected the image of a savant who knew nothing about art history. That was hardly the case but he mostly kept it to himself.

As Woody Allen put it most of life is about just showing up.

Early on Jim got a job painting billboards. That was his gig in New York creating huge advertisements in Times Square.

He described to me the day he quit.

On the scaffolding, as he explained, when the wind gusts it rocks the boat. The cardinal rule is never to reach for the wall. The counter instinct is to lurch back. One day on the job he watched two guys plunge to their death.

“The foreman saw what happened and just punched out their time cards” he said.

That was the day he started as a fulltime artist. It was 1960 and just a few years later he sold out his first show at Dick Bellamy’s Green Gallery.

Notoriously, Bellamy was indifferent to sales and marketing. His backer, Robert Scull, bought F-111 now in MoMA, dirt cheap. It is one of the greatest icons of the Pop movement. Rosenquist liked Bellamy, everyone did, but the grass was greener with Castelli.

“Much of the aesthetic of my work comes from doing commercial art,” Rosenquist told the NY Times. “I painted pieces of bread, Arrow shirts, movie stars. It was very interesting. Before I came to New York I wanted to paint the Sistine Chapel. I thought this is where the school of mural painting exists. You were painting things up close, like big chocolate cakes. In Brooklyn, I painted Schenley whiskey bottles two stories high, 147 of them over every candy store.”

Of the Pop arists Rosenquist has attracted less academic/ critical attention than his peers: Warhol, Johns and Rauschenberg. He was not a top seller like Lichtenstein.

The conundrum is that drawing upon the imagery and techniques of a commercial billboard painter the work seemingly lacks the irony and gravitas of the aforementioned masters. Arguably, he would have it no other way.

While he was courted  as a celebrity, and told me tales of exotic enticements, he primarily thought of himself as a worker and family man who made art for a living.

It amused him that guys like me probed for meaning in his work. While deftly deflecting  with a sly wink we both knew there was a lot under the surface of such seemingly accessible and glib imagery.

His primary resource for material was a stack of LIFE magazines. When we weren’t around he would scour through them for images. He would cut one out and put a transparent sheet of plastic over it. This was then gridded, and using a technique that goes back to Renaissance masters, from an image the size of his hand he could scale up to a skyscraper painting.

One such image was a shot of the legs of a fireman sliding down the pole. Actually, it was based on a Polaroid of McCain with his legs around a broom. That enormous vertical painting was suspended from the top of Buckminster Fuller’s dome for the American Pavilion of the 1967 Montreal World’s Fair.

That work was included in a show of the World's Fair organized by Sue Thurman for Boston's Institute of Contemporary Art at Horticulture Hall. On a visit home I reviewed it for Arts Magazine. It put the ICA in debt and was said to cost Thurman her job when the ICA went broke in 1968.

Now and then I met Jim's wife Mary Lou and their child. He was devoted to her but they divorced some time later.

Out on East Hampton, at the end of the day, Jim would cook burgers for the men. We had tin cups for a round of grog. When the men bunked in I would borrow the car to explore the bars of East Hampton chasing the ghost of Jackson Pollock.

When the work was done I got another gallery job and, via New Orleans, made my way back to Boston with a frail and a new career in straight and gonzo journalism.

Years later, I encountered Jim at the opening of the Foster Wing of the Rose Art Museum. He was older and not wearing a paper suit. We shared laughs and memories. He told me that he was primarily living in Florida.

Now and then I thought of looking him up for a legitimate interview. That obviously never happened. This morning in Provincetown, looking out at the beach, sifting through seeds and twigs, I’m smoking a raspy, rough joint of memory getting high with some help from a friend.