A Gentlemen’s Guide to Love and Murder 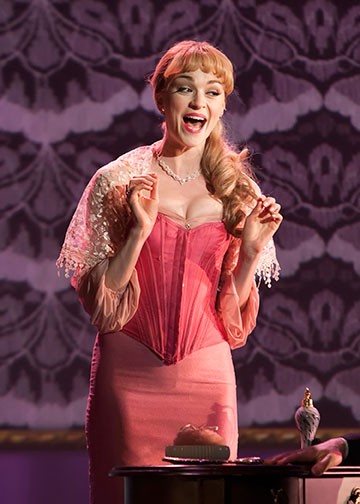 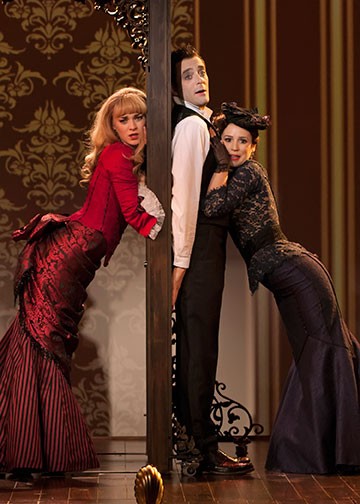 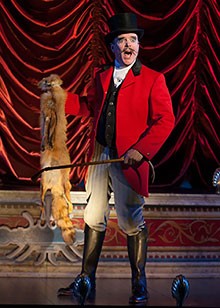 The Old Globe Theatre is where talented and creative minds come together to conjure up breathtakingly fresh theatrical ideas.  Unlike the alchemists and dreamers of old who thought they could turn lead into gold, our modern day theatrical alchemists now work with words, songs and music.  When called upon they can indeed, reinvent and turn out smashingly good results delivering a wonderful, witty, and brilliantly entertainingly evening of theatre in the bargain.

Which brings me to “A Gentlemen’s Guide to Love and Murder” now currently at The Old Globe’s Donald and Darlene Shiley stage in San Diego’s Balboa Park.  This world premiere musical comedy conjured up by the remarkable team of Robert L. Freedman and Steven Lutvak, and brilliantly directed by Darko Tresnjak, is an early Christmas gift to the city of San Diego.

Good as the creators of this hilarious production are, it still takes wonderfully talented actor/singers, and a first-rate creative team to seal the deal. Without this superb cast, one would probably have a good show, yes. But with a great cast one can have a great show. And that’s the reality currently taking place at one of America’s finest Regional theatres.

There’s not a false note in this production.

The story is not new by a long shot. Roy Horniman’s novel “Israel Rank” became the basis of the 1949 British comedy movie “Kind Hearts and Coronets”.  The black-comedy  film about English aristocrats, their titles, and the role of succession in their Edwardian society, made an international star out of Alec Guinness.  So, the project is off to a good start.

The play revolves around Monty Navarro (a terrific Ken Barnett with a terrific voice), who is on a mission to avenge the honor of his deceased mother in this extremely funny and entertaining musical about a “serial killer” with a hidden agenda.  Navarro is determined to avenge the family honor and inherit an Earldom in the process.  I know, I know.  How can one make a hero and/or a likable protagonist out of a character who is dead set (pun intended) on murdering his relatives in a quest for a mere Earldom, you ask?  Have you ever heard of a chap named Richard III or an organization called The Friends of Richard III?  According to the society’s PR flack, the poor fellow was outrageously misunderstood.  Richard couldn’t or wouldn’t hurt a fly, let alone murder his relatives… even for a kingdom.

Be that as it may, this production is a musical comedy and a darn funny one at that.

There are eight D’Ysquith relatives who stand in Monty’s way in his quest to become the Ninth Earl of Highhurst, and all eight D’Ysquith characters are brilliantly played by the incredible, Tony-winning Jefferson Mays.  It’s an amazing, athletic, glisteningly polished tour de force performance.

In between the silliness and the serious, there’s time for two love interests to distract Monty from his primary plan.  Sibella (the lovely, svelte, soprano played by Lisa O’Hare) is the object of Monty’s fantasy-wife image.  She however, doesn’t find him suitable husband material.  He has no money or social position.  The result…Sibella marries another, but she doesn’t cut the “mistress” chord completely much to Monty’s relief.

Phoebe D’Ysquith (a patrician-like Chilina Kennedy and the possessor of a fabulous voice) on the other hand, is rich and she has a social position in spades!  It’s a no-brainer… Monty becomes engaged to Phoebe and the elimination contest begins.

What is so entertaining – if I may use that word in the context of the title – about “A Gentleman’s Guide to Love and Murder” is how creatively the authors and director Tresnjak have planned the many different methods that are used to eliminate the D’Ysquith line of succession.   It’s absolutely delightful to watch nine performers go through their paces with precision, crispness, and confidence.  With a solid cast of supporting and ensemble players, this delicious production is a feast for the eyes and ears.

Just the way it’s staged, with its picture-book framing of scenes, the classic look of Edwardian England and its many clever directorial touches, it’s easy to see the fingerprints of director Tresnjak all over this production (he does like the color red as I remember from his days as the Globe’s former artistic director).

“A Gentleman’s Guide to Love and Murder” is another winning production from The Old Globe, and one that has “Broadway transfer potential” stamped boldly on it from the minute the curtain went up.  It runs through April 14th.  Don’t miss it!