Actors Playhouse Goes All the Way 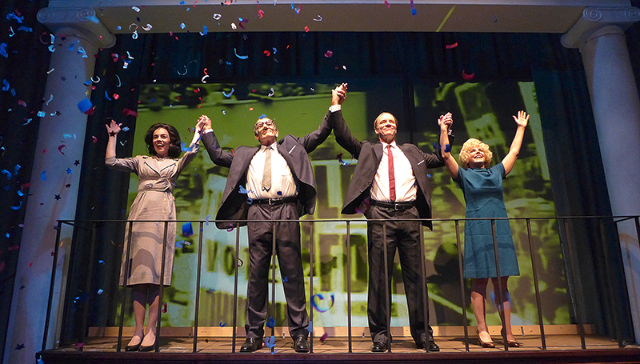 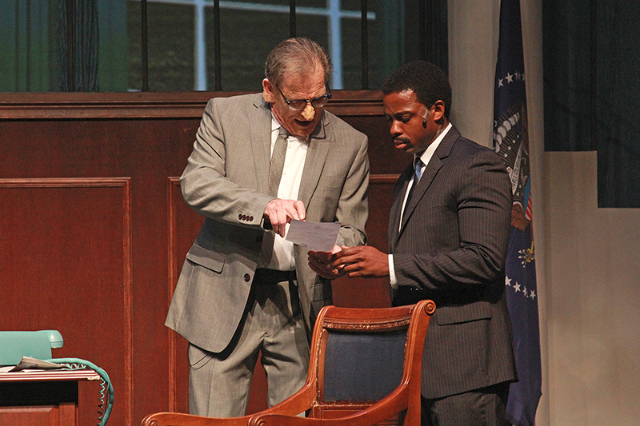 Imagine that a bunch of folks have hoisted you into the air with your stomach facing down.

They’re engaged in a tug-of-war of sorts with you and the groups opposing each other: One group pulls you hard by the right arm, another by the left, while the others are tugging on both your legs. They’re exerting such force that you fear limbs will be ripped from your body.

You counter by pulling as hard as you can in the opposite direction. You’re trying to stay intact, but also to bring opposing factions together.

The above scene might illustrate President Lyndon B. Johnson’s mighty struggle in “All the Way,” Robert Schenkkan’s Broadway political play that’s as absorbing as a suspense novel you just can’t put down.

You’ll find yourself riveted to the stage during Actors’ Playhouse at the Miracle Theatre’s current engrossing, arresting, fast-paced production.

“All the Way,” the 2014 Tony Award winner for Best Play, is running through April 8 at the award-winning Coral Gables theater company.

The play chronicles the first year of LBJ’s presidency. The first act focuses on his struggle to pass the Civil Rights Act of 1964 while the second chronicles his efforts to win re-election. Throughout the play, LBJ must deal with his adversaries and compromise with his allies in an effort to convince them that signing the civil rights bill is the right thing to do. Obstacles abound: LBJ faces not just opposition from Republicans, but within his party.

The Democrats are divided, with southern Democrats demonstrating fierce opposition to the bill.

There’s even infighting between Martin Luther King Jr.’s supporters over what actions to take in order to secure their rights. Indeed, in the Actors Playhouse production, the disagreements between King’s supporters reach such a boiling point, complete with shouting and finger pointing, you wonder whether these people actually share a common goal or are members of rival gangs.

Compromise is called for among the many groups in “All the Way.” The scenes featuring King and the black activists bring to mind the autobiographical AIDS play “The Normal Heart.” In Larry Kramer’s play, AIDS patients who become activists for awareness and preventative measures share a common goal, but fight bitterly among themselves regarding what approach to take to spread awareness of the disease.

The temperature in the room rises considerably as the death toll escalates. The AIDS patients/ activists must compromise if they’re to get anything done.

The maladies in “All The Way” aren’t literally physical diseases, but the “cancers” of hate, discrimination and segregation.

In “All the Way,” a play featuring complex, flesh-and-blood characters who come across as very human under David Arisco’s sensitive and detailed direction, we learn why LBJ had a heart for those less fortunate. Even though we know the outcome of the play, we’re drawn to the stage throughout. That’s a testament to the commendable acting and the palpable tension Arisco has implemented into the production. As the weeks, days and hours tick down to election day, notices such as “four months to the election,” which quickly flash onto a projection screen, add to the suspense, reinforcing the urgency of the matters.

In a successful production of “All the Way,” the complexity of LBJ’s character is on full display. That is the case here, with stage, film and TV star J. Kenneth Campbell, best known as Ed Wingate on “Matlock,” in the title role.

With slicked-back hair and narrow eyes peeking out from behind black-rimmed glasses, Campbell’s LBJ suggests a man who has, for a long time, experienced the hardships and setbacks of life. Those eyes are narrowed with an intensity and determination to right wrongs this man has seen go on too long.

Bryan Cranston won a Tony Award for his portrayal of LBJ in the Broadway production of “All the Way.” However, Campbell gives a brilliant performance himself as our nation’s 36th president. It’s a portrayal filled with incredible nuance, subtlety and towering force, when necessary.

Each scowl or frown from Campbell’s LBJ conveys dogged determination just as powerfully, or more so, than words.

Campbell has obviously carefully analyzed and internalized each word uttered by LBJ in “All The Way." Each spoken word, each gesture, each expression carries a spontaneity that makes you forget you’re watching a performance.

He manages these feats without impersonating LBJ. The actor shifts seamlessly from frustration and explosive rage to easy-going charm, from patience to antsiness, from weariness to vigor, from crudeness to polish.

There are 17 actors, with the majority of them playing multiple parts, excluding Campbell, who only portrays LBJ.

Another actor with one role is Marckenson Charles as King. Charles’ King is a peacemaker, a humble, respectable person, especially in LBJ’s presence. Marckenson also endows King with an intensity befitting the urgency the man feels to secure equal rights. Marckenson, without impersonating the late, great civil rights leader, nails his speech patterns while delivering a eulogy for a fellow African-American killed by a white man (hardly the only parallel in the play to today’s turbulent times of racial tension and division).

The rest of this fine cast slips seamlessly in and out of their multiple roles.

Of particular note are 12-time award-winning actor Gary Marachek as a smirking, sly and arrogant Gov. George Wallace of Alabama and a no-nonsense, blunt Walter Reuther, president of the UAW; Candice Marie Singleton as a devoted Coretta Scott King and Deborah L. Sherman as a loyal but assertive Lady Bird Johnson.

Eric Nelson’s realistic lighting includes appropriate colors, such as orange to symbolize fire when a scene gets particularly heated. Jodi Dellaventura’s handsome sets easily slide on and off stage and allow characters to be highlighted when necessary.

Shaun Mitchell’s vivid sound design is a plus for the production. For instance, each time someone announces that LBJ is down in the polls, a harsh sound of a thunderclap symbolizes a blow to LBJ, as though he were getting punched.

Mitchell also designed the projections, some useful, some unnecessary. When the play opens, King is flying on an airplane. Do we really need to see the projection of an airplane descending through clouds? Also, do we need to see workers digging for a corpse when it’s announced that the body of one of three men gone missing is presumed dead? Such projections add nothing to the scenes.

Senator Russell: How many civil rights bills you buried in the last ten years?

Senator Russell: Has that “graveyard” of yours got room for one more?

Senator Jim Eastland: I’m diggin’ a hole as we speak.

Schenkkan’s epic work is hardly a dry history lesson but a focused, compelling play about one man’s attempts to unite, forge compromises and do the right thing.

Those in the anti-Trump camp certainly yearn for such a leader.