Luisa Miller at the Metropolitan Opera 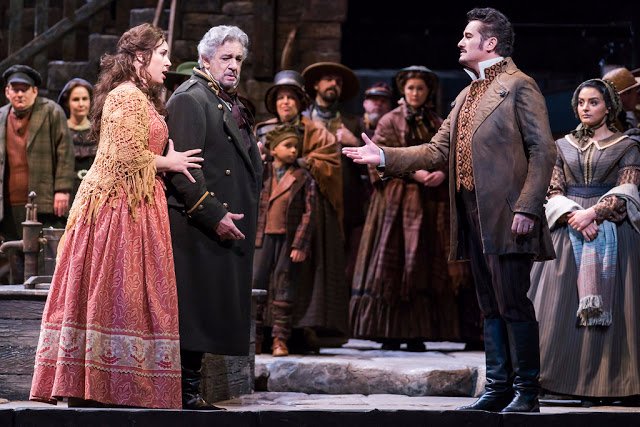 The Metropolitan Opera's revival of its 2001 production of Luisa Miller looks backwards and forwards at once. It features Placido Domingo singing the latest in a line of Verdi baritone roles that the aging tenor has used to extend his already distinguished career. (It was also supposed to re-unite the singer with James Levine, but the conductor's firing due to repeated accusations of sexual misconduct by multiple parties spoiled that happy event.) It looks forward in that its two leads, Piotr Beczala and Sondra Yoncheva, represent the cutting edge of a new generation of opera singers that are having their well-deserved moment in the spotlight.

Although it is historically considered an important Verdi opera that marks the beginning of that composer's mature period, Luisa Miller has not been revived since 2006. That might be because the title role is difficult to cast. Singing styles were in transition when Verdi wrote this opera in 1849, between the bel canto songbirds of Rossini and Donizetti's era and the later, more forceful style that would characterize the latter half of the 19th century. The role of Luisa falls awkwardly between these two stools.

On Monday night, in the second performance of this season, Sonya Yoncheva did an admirable job of fulfilling the role. She sang sweetly in the first half of the opera but her voice gathered force, volume and size in the second as Luisa faces betrayal, crisis and death. This culminated in a thrilling third act and a pair of duets, one with Domingo and a second with tenor Piotr Beczala. When Domingo returned for the trio that comes just before the denouement, it was clear that a metaphorical torch was being passed to the younger singers, a moment powerful not just for its dramatic value onstage but for the overall sense of operatic history.

Beczala came alive in the second half of Act II, ringing down the curtain in a powerful aria where expresses his belief that Luisa has betrayed him. (She hasn't, but there's a reason this opera is based on a play called Kabale und Liebe!) Here, Beczala unpacked the power of his instrument, delivering a strong and thrilling tone that spoke well for his future in heavier roles. That darkness stayed into the third act, in the long and heavy scene with Yoncheva where the former lovers commit slow suicide.

Casting a former dramatic tenor, in this case Domingo, in a role written for the baritone voice is like changing an orchestral score so that parts written for a trombone are played by a trumpet. It doesn't sound terrible, but it's just the wrong instrument. That reservation aside, Domingo gave a strong and honorable performance, bringing dramatic weight and power to the role of Luisa's old father Miller. He showed warmth in the Act I scenes and sizzling horror in the Act III moment when Luisa reveals to him that she plans to commit suicide. Considering the singer's age (he's 77, according to his biography) and that this is his 149th role sung at the Met, it was a remarkable achievement.

This run of Luisa may provide breakout opportunities for the two basses playing the villains of the piece. As Count Walter, Alexander Vinogradov sang with fulsome darkness and a gritty tone color that brought this murderous nobleman's ambiguity to the surface. As his lackey, the marvelously named Wurm, Dmitry Belosselskiy brought a contrasting color, an oily demeanor and excellent singing. The duet for both gentlemen, staged in elaborate chairs before a real roaring fire, was a highlight of the second act. Look for more from both men in the future, as well as mezzo Olesya Petrova shoehorned into the small role of Federica, Lucia's romantic rival.

In the pit, veteran Verdi conductor Bertrand de Billy was a solid, unimaginative and thoroughly competent replacement.  He must have commanded a hefty fee for stepping in for this short run, but the rousing overture, supporting rhythms and crescendos were all present and accounted for. The Met chorus has less to do in this opera, but made their presence felt in the opera's busy opening scene. This production, by Elijah Moshinsky and designed by Santo Loquasto was first mounted on the Met stage in 2001

works for Luisa Miller, but could easily be swapped in for almost any 19th century Romantic opera. It is efficient, boring and has a working fireplace. (Reprinted with permission from Superconductor.)