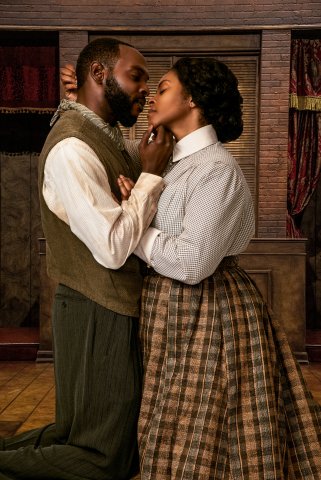 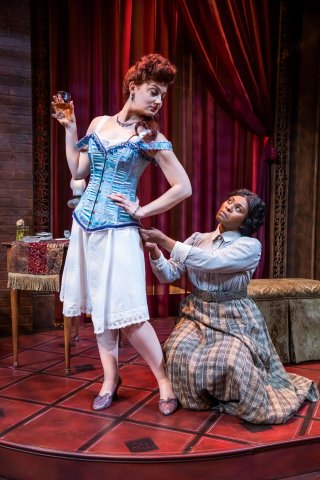 In fact, PBD handles the lyrical material with as much care as protagonist Esther Mills exercises while sewing garments.

Folks can see for themselves in PBD’s intimate Don & Ann Brown Theatre on West Palm Beach’s Clematis Street. There, the production runs through April 17.

PBD has assembled some of South Florida’s top talent, in addition to able out-of-state performers, to tell Nottage’s touching, 1905-set tale. In it, she elegantly and poetically touches on ideas and themes such as intimacy, friendship, the American Dream, race, class, exploitation, the role of women in society, immigration, and independence.

And just as Nottage has packed many themes into her play without overstuffing it, scenic designer Michael Amico has neatly populated the wide stage with multiple settings without overcrowding it. Actually, Amico’s artistic choice enables the production to flow with cinematic-like fluidity.

But life has not run nearly as smoothly for many of Intimate Apparel’s characters. For the most part, they are marginalized individuals, the kind that Nottage writes about with compassion and sensitivity in her plays.

Intimate Apparel is a complex, poignant piece with rich symbolism and many layers. But it is ultimately about a young woman’s attempt to fulfill her dreams during a time when she faces limitations due to her race and gender.

In 2022, when the Black Lives Matter movement is understandably vocal, and with the MeToo movement also energized, Nottage’s play is a timely piece worth telling.

Several of Intimate Apparel’s characters harbor strong desires, but face obstacles. In particular, they include society’s limitations for minorities during turn-of-the-century America.

More specifically, the play takes place in New York City in 1905. Within that setting, Esther Mills lives in a boarding house for women and works as a talented seamstress, creating women’s intimate apparel.

Like anybody else, Esther desires her share of the American Dream. For her, that would include marrying a loving husband and opening and operating a beauty parlor. There, she would not only make money, but pamper African American ladies such as herself. However, Esther faces obstacles. For starters, opportunities for women, especially African American women, were scarce at the turn of the century.

From the outset, it is easy to identify with Esther. After all, she harbors dreams and desires, just like the rest of us, and appears to be an honest and caring young woman. In fact, we come to care about Esther so much, that one can feel tempted to dissuade her from entering into a relationship, much less marry, a stranger who starts sending her love letters from overseas.

Yet, Esther begins to harbor feelings for George Armstrong. He is a Barbadian laborer helping to build the Panama Canal. And his letters feature flowery, romantic language, expressing a zest for life, optimism, and love for Esther — even though he has obviously never met her. Of course, the illiterate Esther relies on others to read the letters to her, and trusts that they are reading them accurately.

Before long, Esther marries George, sight unseen. And when he turns out to be different than Esther envisioned, one fears that her future might suffer.

Now, George is not inherently a bad person. Rather, his past and present circumstances have shaped his personality and tendencies. He has worked physically hard and long for little to no reward.  Understandably, for him, the chance to come to America and taste success must sound alluring, as it would to any poor immigrant. Perhaps it makes him forget, even for an instant, that he is Black and it is 1905.

To his credit, award-winning South Florida actor Jovon Jacobs does not play George as an evil man. In the first act, when we hear George read his letters to Esther, Jacobs imbues his character with optimism, charm, and enthusiasm. In fact, listen to Esther describe how George sounds: “He got a melodious voice, each word a song unto itself.”

But soon, George desires his share of the American Dream. And when it does not come as quickly as he would like, disappointment and frustration clearly register on the impulsive Jacobs’ face. And we hear it in his voice. It no longer contains the melodiousness that Esther heard earlier.

Soon, the impulsive, seething George grows impatient – and eventually desperate. There is a primitive, even animalistic desperation and sensuality to Jacobs’ George, whose raw emotions always seem spontaneous and natural. At times, he sounds and looks like a pacing, starved, and caged wild animal.

By contrast, in a nuanced performance, award-winning South Florida actress Rita Cole lends Esther a quiet, inner strength, dignity, and modesty. In addition, at appropriate times, Cole forcefully, yet naturally, conveys Esther’s convictions, frustrations, determination, and sense of urgency. In particular, when the play begins, Esther is 35-years-old. Yet, she is not married and has yet to fulfill her ambition. “How much do l I have?” Esther must wonder.

Cole finds the right balance between Esther’s strength and vulnerability. And when it comes time to act vulnerable, Cole convincingly does so without making her character come across as self-pitying.

Meanwhile, Krystal Mosley loosely, sensually, and with an air of independence, portrays Mayme, a Black prostitute, and talented Ragtime musician.

While many may point to the indignity of Mayme’s profession, Nottage has created her with dignity, and Mosley conveys it. Although Esther disapproves of Mayme’s line of work, she is nevertheless friends with her. Also, Esther sews lingerie for Mayme.

Esther does the same for Mrs. Van Buren. She is a white, upper-class socialite, part of New York City’s high society. However, she is stuck in an unhappy marriage. That is partly because she could not give her husband children.

As Gracie Winchester portrays Mrs. Van Buren, the character wears a façade of playful charm and free-spiritedness – qualities that mostly mask her loneliness and insecurity. Curiously, Winchester does not convey even a hint of the latter qualities. On a brighter note, in one telling stage picture, Winchester's Mrs. Van Buren, hand on hip and eyebrows raised in a conceited expression, looks down on Esther. The latter is kneeling and looking up at Mrs. Van Buren while adjusting her blouse. The two characters may represent two entirely different social classes, yet Mrs. Van Buren is obviously sexually attracted to Esther.

Certainly, an attraction also exists between Esther and Mr. Marks. He is a white Romania immigrant and an Orthodox Jewish fabric salesman. Esther is one of his customers. Under Be Boyd’s sensitive direction, clear moments of awkwardness and romantic desire exist between Mr. Marks and Esther. At one point, she tries to touch him, but he pulls away immediately and instinctively. Due to his religious beliefs, he cannot touch any woman to whom he is not related or married. Unfortunately for Esther, Mr. Marks is already taken through an arranged marriage. And besides, people certainly frowned on mixed marriages at the time, if they were not altogether forbidden.

Jordan Sobel plays Mr. Marks with a believable enthusiasm for fabric, as well as an endearing awkwardness, nervous energy, and eagerness to please. However, Sobel’s performance falls short in his unconvincing attempt at an accent.

While Mr. Marks loses customers and is poor, Mrs. Dickson is one of the only characters whose business is doing well. Specifically, Mrs. Dickson operates the boarding house where Esther lives. Gabrielle Lee plays the opinionated Mrs. Dickson a bit over the top, but imbues her with energy and a no-nonsense demeanor. Lee’s Mrs. Dickson does not hesitate to stick her nose in other people’s affairs, particularly Esther’s. For instance, Mrs. Dickson makes it plainly clear that she objects to George and Esther’s marriage. However, Mrs. Dickson also possesses redeeming qualities, and Lee clearly conveys them.

Among the behind-the-scenes artists, Kirk Bookman’s realistic lighting focuses the actors and ensures that transitions between scenes happen seamlessly.

Meanwhile, Brian O’Keefe’s costumes seemingly make it easy for the performers to move. Also, the visually-appealing costumes tell us something about each character. For instance, Esther wears a long-sleeved blouse and long dress, both of which suggest her modesty. By contrast, Mayme who is less modest, wears a sleeveless outfit.

Ragtime, a propulsively syncopated musical style, and a forerunner of Jazz, plays at different points throughout Intimate Apparel. It is fast-paced, upbeat style of music that can symbolize change coming for these characters, who seem stuck in their present circumstances.