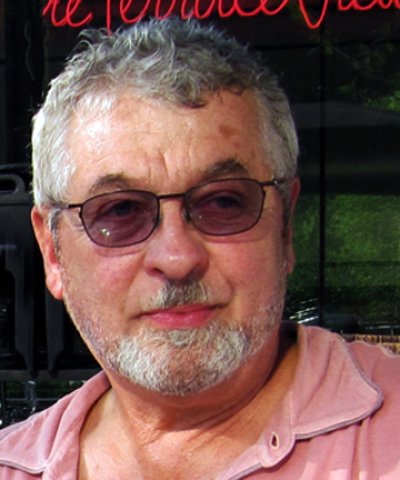 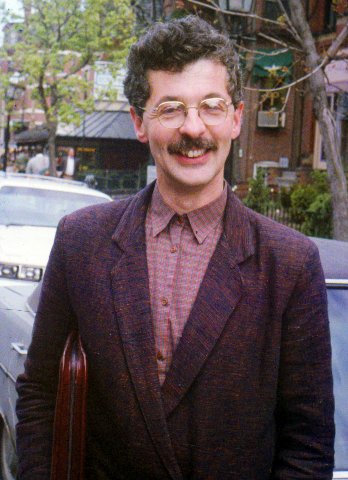 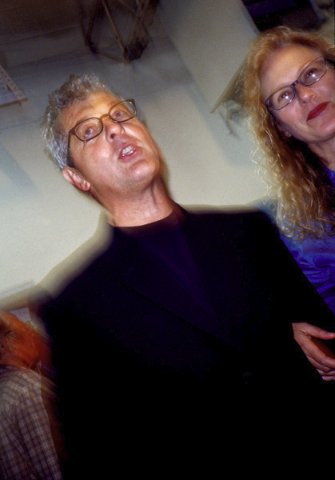 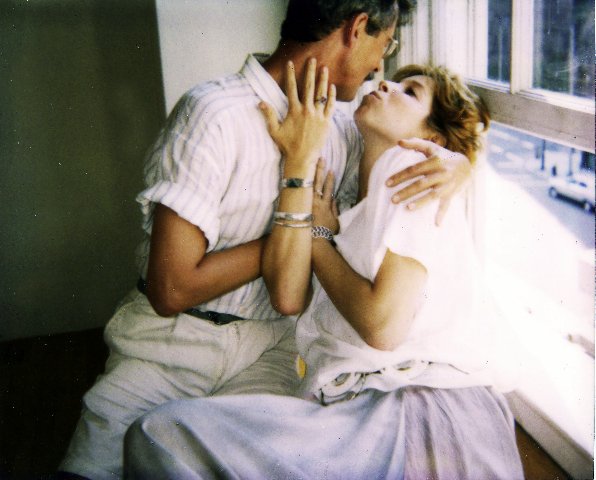 Cutting up with Ann Pasternak then with Stux Gallery. Photographer unknown. 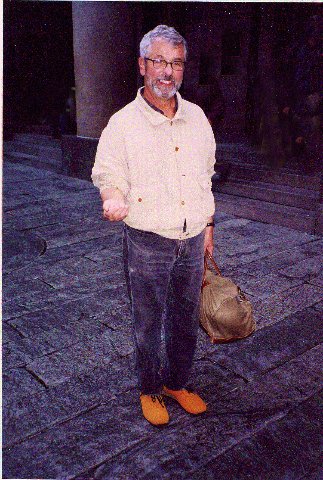 Dining at Durgin Park during a visit to Boston. 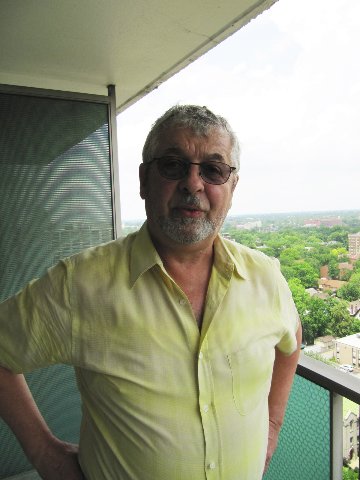 On the balcony of his St. Louis apartment. 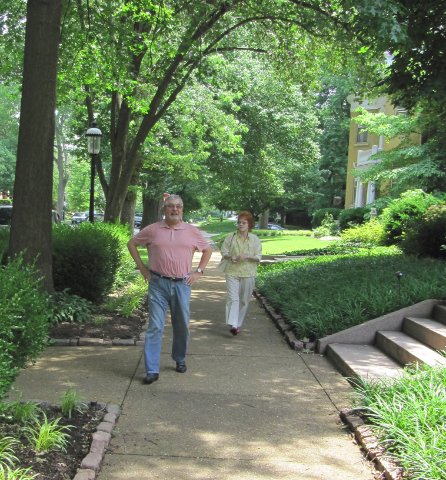 A walking tour of St. Louis 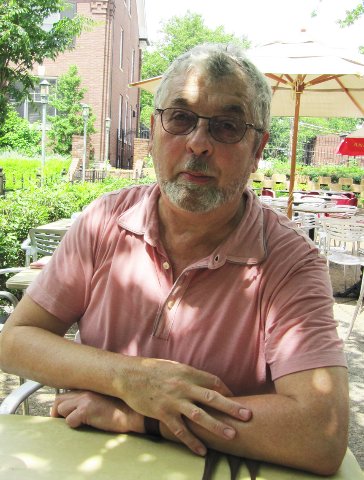 Made in the shade. 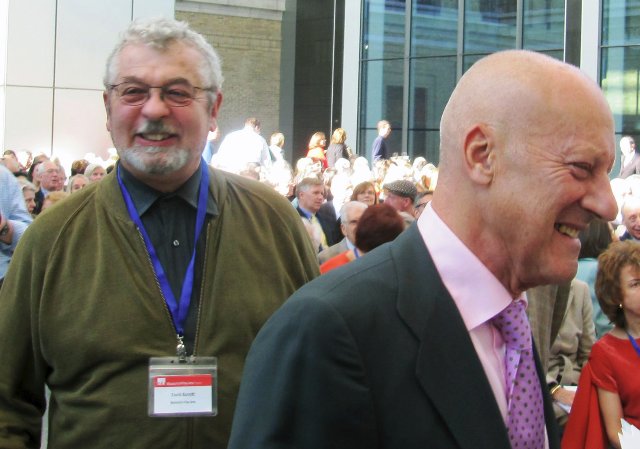 With Lord Norman Foster at the MFA.

Many in the art world, from coast to coast, were saddened to learn of the uniquely poetic demise of renowned arts critic, David Bonetti.

He was discovered by the building manager who entered his Brookline, Mass. apartment to change batteries in a smoke detector. It is likely he was listening to opera.

Not long ago we posted his last opera review. With difficulty, he was not adept at computer technology, he put up the text and I would post the images. He would then write captions. One of his last notes commented on the book Astral Weeks by Ryan Walsh about Boston's counter culture of 1968. His playful e mail referred to my presence in the book. An e mail thread reveals that he bought the Morrison CD during his recent, annual ‘winter break’ visit to California.

On many levels our lives and careers overlapped. We both had Italian fathers and Irish mothers. He grew up in Milford a western suburb of Boston. When he lived in San Francisco and later St. Louis he returned regularly to spend holidays with his friends and family.

We both attended Brandeis University. I was class of 1963 and he graduated in 1969. He shared and celebrated a birthday, April 26, with former Art New England publisher, Carla Munsat. By calculation it appears that he was about to turn 70 at the end of the month. From time to time he commented on being treated for a heart condition.

Other than respect for its renowned fine arts department David was mostly apathetic when we discussed his Brandeis years. He was incensed, however, when Brandeis attempted to close the Rose Arts Museum and sell its collection of pop and post modern art. The unique collection was then valued at some $350 million. The 25 most prized pieces were acquired by founding director, Sam Hunter, for some $45,000 dollars.

For the St. Louis Post Dispatch he wrote a scathing article titled "Rape of the Rose." That headline was appropriated by Brandeis grad and art critic, Francine Koslow Miller, for her book on the controversy.

With another Brandeis graduate, Judy Goldman, I first met David when they worked with the Boston gallerist, Thomas Siegel. Before that he worked for Wayne Anderson the trickster director of Hayden Gallery at MIT.  I was covering the Boston art world at the time and Bonetti was a lively source. He always knew the behind the scenes stories and shared them with humor, insight and a sharp edge. After a particularly witty story, often off color,  he would burst into laughter. Those late night conversations continued over decades. In recent years mostly through e mail.

After Deac Rossell, primarily a film critic, I was the art critic for Boston After Dark which later became the Boston Phoenix. When I left for the Boston Herald Traveler  the critic Ken Baker moved over from the Christian Science Monitor. When Ken departed for the San Francisco Chronicle a spot opened which Bonetti filled.

He earned a reputation for insightful and edgy coverage of the Boston art world then in a dramatic phase of transition, growth and turmoil. By e mail, former Institute of Contemporary Art director, David Ross, commented how much he respected Bonetti for passionate, well written reviews which he did not always agree with.

After several golden years at the Phoenix, David joined Baker in San Francisco. As a signifier of a now passed era one company produced a morning and afternoon paper. Baker had seniority with the San Francisco Chronicle and Bonetti wrote primarily for the San Francisco Examiner.

Baker is a formalist who has written a definitive book on Minimal Art. In lifestyle and aesthetic position the critics could not have been more different. David told me that they enjoyed a respectful and productive professional relationship. That entailed dividing assignments which Baker had priority over. There was also the mutual struggle for travel money to cover major exhibitions in LA and occasionally New York. Things were getting tight.

As has been the case all over the country there was downsizing and a shrinking newsroom. With less seniority Bonetti took a buyout.

While on hiatus I informed him of a position at the St. Louis Post Dispatch. The museum was expanding and there was a need for a first class art critic. David took the job and later thanked me with dinner at Durgin Park when he was visiting Boston.

Under publisher Joseph Pulitzer there was terrific support but, for the most part, St. Louis was a provincial backwater of  the art world. The young Perry T. Rathbone put the museum on the map with pizzazz and showmanship. That earned him the position as director of Boston’s Museum of Fine Arts. But the reversal from Boston and San Francisco to St. Louis resulted in an artistic bipolar disorder. David was landlocked from the sultry surf of both coasts.

On December 23, 2008, in the blog Two Coats of Paint, Sharon Butler reported on his malaise. The headline reads “Schjeldahl Hurts David Bonetti’s Feelings.”  She wrote that “St. Louis Post-Dispatch art critic David Bonetti has just finished reading Seven Days in the Art World, and he isn’t happy. 'Rodney Dangerfield ain’t got nothin on me. I’m a loser, baby, so why don’t you kill me. At least that’s what The New Yorker’s art critic Peter Schjeldahl implies. In discussing the role of art criticism with Sarah Thornton for her dishy but well-researched and well-written book, he said, ‘You’re not going to get a good art critic in St. Louis.’ Imagine me – an art critic in St. Louis – reading Thornton’s account of art world people and events with great enjoyment and then coming upon that bombshell! (On page 157, if you want to check it out.) Didn’t Schjeldahl know that it’s usually my job to put down what passes as the art world in the Lou? He usurpt my role and he didn’t even give me any credit! Okay, I know he was most likely using St. Louis as an example of fly-over cities and he didn’t specifically mean St. Louis, i.e. me. But why couldn’t he have chosen Atlanta or Milwaukee and let the art critics in those cities, if there are any, have that weird experience of being insulted synecdochically in a book they were reading?”

When Bonetti left St. Louis he fired off a final salvo on September 8, 2009. “As some of you might have heard, I am leaving the Post-Dispatch. Today is my last day and this will be my last Culture Club post. Although some of the Cherokee Street clique would like to think that I was fired by an enlightened management that wants reviews of inept artists showing their woeful attempts at self-expression in vanity galleries, that is not the case. I took advantage of advanced age and a benefits package and decided to retire…

“I would be the first to admit that St. Louis and I were not a match made in heaven. Indeed, my editor Christy Bertelson for the past unhappy year and a half accused me of hating St. Louis. I do hate things about St. Louis: the willed ignorance, the racism, the smugness of the self-appointed social and cultural elite, the stupidity of the political class, etc. But it is hard to hate a city where you’ve lived for more than six years. Affection grows in spite of yourself.”

With panache Bonetti roiled the locals by publishing lists of "most annoying people." There was blog commentary about who did or did not make the list. A dissed artist posted a YouTube video touting a David Bonetti cheese cutting board. That kind of push back rolled off him like water on a duck's back. Often he approached criticism as a blood sport.

He was still living in St. Louis when Astrid and I passed through town in September, 2010. Generously, he got us affordable time in a guest unit of his condo building. It was available for just one night at $50. He proved to be a perfect host. This included neighborhood walking tours, history spiced with gossip, and a visit to the museum.

In an article “Meet Me in St. Louis” I wrote that “The day was toasty as we ambled along enjoying his running commentary. He was anxious to point out the former homes of such famous residents as T. S. Eliot, Tennessee Williams, and William Burroughs. All within walking distance.”

After a full day we settled in his cluttered apartment for a nightcap. He was trying to downsize for a move but was in a quandary about where best to settle.

After much deliberation he relocated to an apartment in Coolidge Corner of Brookline. That meant a short walk to the Cleveland Circle line as well as the cross town Harvard Avenue bus. It meant being closer to family as well as convenient to New York. Since retirement there were trips to Europe particularly time in Italy. With buyouts and pensions he was able to live comfortably.

He told me of ongoing health issues which are common to our age. But his sudden passing came as a surprise.

During the St. Louis visit I suggested that he might contribute to Berkshire Fine Arts. With typical color and insight he told me then, and later, how fed up he was with writing about the fine arts. He would surface for the occasional feature but commented on the stress of working with magazine editors who do not encourage critical commentary in gallery reviews. David was not know for playing along. It was a lot of work for not much money.

But he proposed covering opera for us. It proved to be a productive new direction which he dove into with typical depth, wit, scathing commentary, and insight. He took no prisoners but ran into push back from readers who challenged his positions. Opera fans tend to the fanatical.

That could put me in a tight spot as his editor. The reviews were so personal, penetrating and edgy that the best approach was just to let it pass.

It is likely that, before or since, Boston has never had a more provocative opera writer. His reviews often included references to performances in San Francisco and gleaned from his trips to Italy. While not an expert or specialist in classical music few could match the richness and color of the writing.

We were pleased to play a role in this late phase of his work. It provided a diverse and compelling final chapter to a remarkable legacy.

It is likely that David would not approve of this piece. He would correct errors and make sarcastic comments. Having admonished me he would say “Oh Charlie” and break into that diabolical laughter.

That’s what I will most miss about him. Every critic needs and deserves a good critic. In that regard David was one of the best.