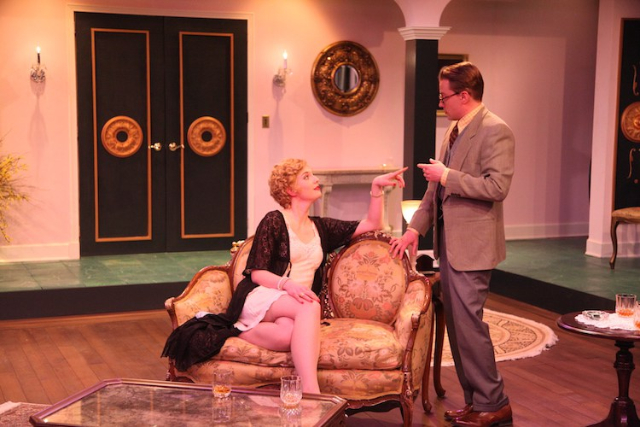 Stoughton as Bille Dawn and Anderson as Paul Verrall. Photos by Johnny Knight.

It’s been years since I’ve seen the film Born Yesterday starring Judy Holliday as Billie Dawn and Broderick Crawford as Harry, her overbearing boyfriend. My memory of the film is kinda fuzzy, since it’s been half a century or so. But I remember it as a bit of fluff about a dizzy blonde.

Going to see Remy Bumppo Theatre’s sparkling production of the Garson Kanin play, Born Yesterday, was a re-introduction to a play that’s rich and relevant. Not fluffy. Funny and witty with a definite edge.

David Darlow, a veteran Chicago and Remy Bumppo actor, directs his excellent cast with a smooth touch and perfect timing. Eliza Stoughton is sharp and charming as Billie Dawn, the woman who Harry Brock (Sean M. Sullivan) rescued from a tawdry life. Harry, a wealthy and crude corporate gangster, is used to getting his way and demands obedience from those on his payroll. He’s become very wealthy buying and selling junk—but he doesn’t know how much money he has or how many junkyards he owns. (Sound familiar?) He and Billie arrive to stay in the two-floor presidential suite at a posh hotel. He has plans to lobby and persuade government officials to approve his big plans to take over post-war European junk, among other things.

Ed Devery (Shawn Douglass) is his lawyer and consigliere, when he can stay sober. Harry’s cousin and body man, Eddie Brock (Drew Shirley) knows what Harry drinks and caters to his every need.

During a cocktail hour visit by Senator Hedges (Brian Parry) and his wife (Maggie Clennon Reberg), Harry explains his business to the senator:

“Scrap iron. I wanna buy it—I wanna move it—and I wanna sell it. And I don’t want a lot of buttin’ in with rules and regulations at no stage of the game…. I ain’t talking about peanuts, mind you…. Do you know how much scrap iron is layin’ around all over ? Where the war’s been?”

After this visit, Harry decides Billie doesn’t measure up to his needs as a wheeler-dealer: She lacks couth. He has the bright idea of getting someone to coach her in language and behavior. Harry decides that a journalist, Paul Verrall (Greg Thomas Anderson) is the man who can tutor Billie in the ways of . Billie is at first insulted that Harry thinks she needs any improvement, but the deal is made.

As act two opens two months later, the parlor is littered with books and newspapers, Sibelius is playing on the phonograph, and there’s art on the walls. Billie has acquired glasses to improve her reading vision. She has also acquired an attitude. She’s intent on understanding what she reads and signs, from the ideas of Thomas Paine to the contracts she has always signed obediently as a formerly silent member of Harry’s organization.

Eddie points out to Harry that he has to be patient because “at the moment, she owns more of you than you do. On paper.”

That’s the setup that results in Billie proving that she wasn’t “born yesterday.”

Garson Kanin’s play, first produced in 1946, has kept its political edge and its celebration of one of the great female characters of the theater. Billie Dawn. Eliza Stoughton does justice to Billie’s character as she evolves through the two-and-a-quarter hour play to be much more than a dizzy blonde. She is smart, stubborn and spirited. Sean Sullivan pulls off the Harry Brock characterization as a working-class guy in a bespoke suit. is endearing as the intellectual thrown into Harry’s world.

Grant Sabin’s design for the hotel suite is elegant and highly functional, highlighted by Michael Rourke’s lighting. Costumes by Izumi Inaba are a treat to see, both the men’s suits and Billie’s gowns and silk pajamas. Christopher Kriz’s sound design provides music of the period, including “Anything Goes,” which Billie sings at the end of act one, and walk-in tracks such as “Paper Doll,” “Between the Devil and the Deep Blue Sea” and, of course, “I’m Just Wild About Harry.”

Garson Kanin was a multi-talented writer, actor and director. His work includes five plays, two musicals, eight screenplays and six novels. His words, spoken by Verrall in Born Yesterday, are commemorated on a bronze plaque near the New York Public Library: “I want everybody to be smart. As smart as they can be. A full world full of ignorant people is too dangerous to live in.”