Directed by David Youse at the Annenberg Theatre 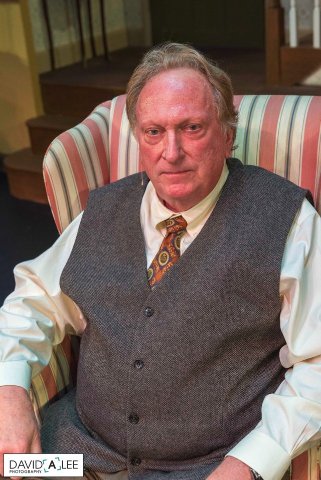 The Cocktail Hour Jeff Jones Photo by David A Lee.

A.R. Gurney is one America’s most prolific playwrights. His canon boasts more than fifty plays that explore the machinations, the philosophies, and the lifestyles of America’s New England upper-class families over the last thirty years. And he ought to know; he’s a Buffalo, NY-born son, of a  privileged American family, and a graduate of Williams College, Massachusetts and Ivy League Yale School of Drama.

“The Cocktail Hour”, is a semi-autobiographical comedy that offers a peek into the world of one upper-crust waspish family as they engage in their nightly ritual – the cocktail get together before dinner.  After all, doesn’t everyone practice this ritual in their own home?  Of course not. Ninety-five percent of us don’t employ servants to cook and then serve our meals.  We have Mom and other family homegrown talent to perform those chores, which, I dare say, they enjoy doing.

One of the spectacular features of this insightful, biting, comedy-satire, is the splendid set design by Josh Claybaugh.  From the moment the curtain goes up, we are smack dab in the middle of a the drawing room, in a home of privilege. Everything we see drips with the lifestyle of ‘old school’ New England.  Conservative politics, and family values, the Steinway grand piano, and the obligatory Portrait of the family Patriarch over the fireplace, the works!

“The Cocktail Hour”, directed by David Youse, is produced at the Annenberg Theatre by Coyote StageWorks founding artistic director Chuck Yates with the following cast:  Lee Bryant as the gin-loving mother Ann, who at times plays the role of family peacemaker, but dearly loves her cocktails; Jeffrey Jones as Bradley the irascible, hypochondriac father  who claims he’s dying and that the world has gone to rot; Chuck Yates as book editor and playwright son John, who has come home to ask permission from Bradley if he can publish his latest play which is about the family, and Yo Younger as his spoiled, needy, sister Nina, who is upset with John for not writing a larger role for the character that plays her.   It’s imagined ‘slights’ like this that partially fuels her ennui and her denial that her lifestyle,of doing nothing with her life, is self-inflicted.

Needless to say, the characters in this family are self-absorbed and don’t have a clue as how ‘traditional’ families function, and worse yet, show no inclination to look inward for solutions.  It’s a little bit reminiscent of what is happening economically and socially to America today. Those who have a history  of not dealing with their problems and issues, and who are oblivious or satisfied with the status quo, usually discover that a bumpy road lies ahead.  In this play there is a lot comedy situations to ease the pain with laughs.  Cocktail parties fueled by nature’s truth serum – alcohol  –  produce loose lips that aren’t always  filtered by empathetic or correct behavior.

John has gone down that bumpy road with a past playwriting effort that was too close to the family bone for Bradley.   Children of successful parents usually seek their approval.  John’s gaffe of wanting to surprise his father with hit play that instead fizzled, resulted in the estrangement of Bradley and John for a period of time.

Now, John turns up with a new manuscript in hand, asking for his father to read it and give his permission to publish it.  Bradley refuses, saying the last family-based play John wrote embarrassed the entire Buffalo business community, to say nothing of their socially prominent friends. Nina, however, jumps at the chance for a preview peek.

To those of us outside that august circle of families with pedigrees, it seems to be a lot fuss and much ado about nothing. It’s the witty dialogue and skilled delivery of zingers that propel this comedy of manners American-style, snappily along.   It’s a sharp ensemble cast where each actor has moments in which to shine, and there are many of them.  Lee Bryant, is a scene stealer with her fey style as Ann.  Yo Younger makes the most of her shallow character Nina, Jeffrey Jones as Bradley, soldiers on despite his cold and his script crutch  Chuck Yates, has the unenviable plot-part character of John to play, which he does with understated style.

As a side bar note: the audience on opening night was informed that one of actors has been nursing a cold for two weeks.  As a way of honoring the theatrical tradition of ‘the show must go on’, said he will rely on a carry-on script as a backup.   Audiences are incredibly empathetic and supportive individuals at times like this.  God love em!  However, a few more rehearsals should do the trick for Mr. Jones and cast to all be on the same page for the upcoming last three performances.

“The Cocktail Hour”, performed at the Annenberg Theatre inside the Palm Springs Art Museum  through April 1, 2018.