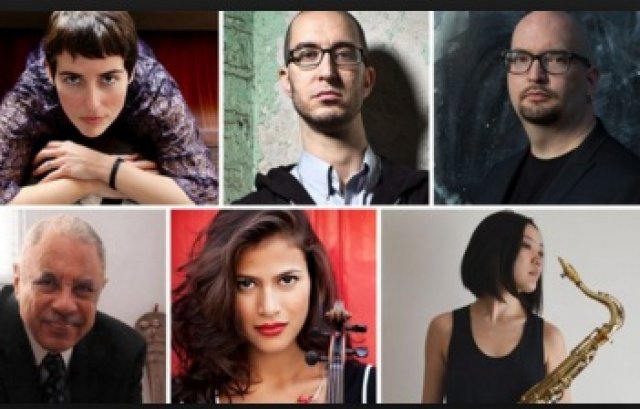 One of the founders of the American Composers Orchestra played jazz piano in nightclubs after he left his day job on Wall Street. The ACO performed five works, three of which came from composers who work in the jazz idiom.

These three jazz-related compositions, all world premiers, were presented.  ACO commissioned them. Hitomi Oba, a saxophonist and composer, attended the ACO Jazz Composers Orchestra Institute and wrote September Coming after her time there. Oba’s jazz touch was lightly expressed. There were brief echoes of Gershwin. Short phrases that opened the piece also echoed out. It is rare to smile listening to a classical composition, but Oba’s work was funny and delightful. Yet there was also clear classical structure.

Ethan Iverson ripped into scales. His piece was called Concerto to Scale, so this came as no surprise.  Notes often rushing amused and charmed us. Iverson was the recipient of the first Commission Club grant. ACO has started a program where enthusiasts get to see a work in development. Concerto to Scale was performed twice in small private salons for the Club members, who were also invited to the final rehearsal. While it as pointed out that members do not get the composers' emails,  they are encouraged to get the know the composer as well as the work.

Iverson was particularly polished in his presentation. This may be because he had become accustomed to an audience for this work, or just because he’s Iverson. His references to classical composers like Mozart and Bach were almost offhanded as they emerged from scales. There was a wink in the music, which is a welcome effect in the classical canon.

In Steve Lehman, the beats are so fresh that as they persist through his Ten Threshold Studies you are increasingly wrapped in their pulse. As we listen, his rhythms spring in and out, and his spectral harmonies haunt. It is easy to imagine him at IRCAM in Paris, which houses rooms where you can just stand and listen to the difference between no sound at all and the beginnings of something in earshot.

The ACO honored TJ Anderson, whose Bahia, Bahia suggested impressions of Brazil.  The program concluded with Dreamscapes by Clarice Assad, who is Brazilian, but weaves her music with Latin suggestions and very American ones. Violin solos were played by Elena Urioste, whose performance is as passionate and arresting as she is glamorous, in a form-fitting strapless gown displaying all the warm colors of the Amazon.

The program was challenging yet also thoroughly enjoyable. Good humor abounded. The music was wonderful. George Manahan conducts with attention to detail and a grasp of the bigger picture. The orchestra members are specialists in new music. The drummer got to stand right next to the bass of the piano keyboard in the Iverson composition. New music gives traditional instrumentalists a new place in the sun.