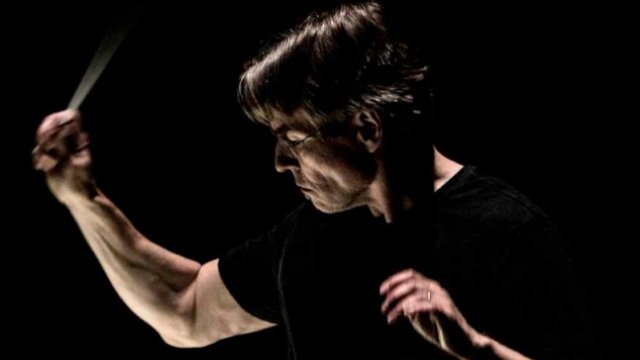 Esa-Pekka Salonen Conducts the New York Philharmonic
The concert began with Esa-Pekka Salonen and Anna Thorvaldsdottir engaging in a short question and answer session on the lip of the stage. And then the work started, a massive, dense construction for huge orchestra with two specially arranged percussion stations located spatially at the rear corners of the stage. A third featuring a large tam-tam was directly opposite the conductor.  The three stations supported a large compliment of brass, wind and strings, wielded by the young composer with a surgeon's touch.

Thorvaldsdottir's work takes the listener on the kind of interstellar journey that one associates with a certain movie by Stanley Kubrick. She made use of otherworldly textures throughout her work: blown breath in the winds and brass without the sounding of reeds, the rustle and whoosh of a bass drum head rubbed in a circular motion, and the muffled roar that you get when you do the same thing to an orchestral gong. It was engrossing and enveloping, pulling the listener in for its wild cosmic ride.

Although he rose to fame as a conductor and still holds the directorship of the London-based Philharmonia Orchestra, Salonen long ago made the choice to put more emphasis on his composition than his conducting. So it was a rare treat to hear him exploring the very familiar symphonies and concertos of Beethoven: in this case the Third and...well, the Third, the latter with the British pianist Benjamin Grosvenor.

Salonen brought an unusual clarity and spaciousness to the orchestra statement that opened this work. When Grosvenor finally entered he did so against a pointillist background that was rich in detail even as the conductor chose to underline certain harmonies and supporting musical ideas that escape the notice of other conductors. Both artists seemed to make a happy musical marriage, with the light touch of Grosvenor well mated to the emphasis on Beethoven's ability to turn a simple phrase.

That astringent approach continued in the first movement of the Eroica, the symphony that expanded the form and possibility of the genre and with two chords, launched the Romantic era in Western classical music. Instead of fire and fury, Salonen took a cool and cerebral approach, digging deep into the roots of this work and providing a rolling carpet of sound that was never yanked from under the listener's feet.

The famous Funeral march was taken very slowly indeed, but that chosen speed seemed right, a natural tempo as Beethoven's expression of personal anguish expanded into a vast statement of universal suffering. The scherzo was marred by faulty, watery horn tone in the first solo of the hunting horns, but the players and sections made up rapidly for this gaffe. The final movement was superb, quirky, playful and a celebration of life that revealed much to this listener: Salonen may have traded his baton for a pen, but he still holds his own with the world's best.  (Reprinted from Superconductor by permission).
Back to Front Page Section Home