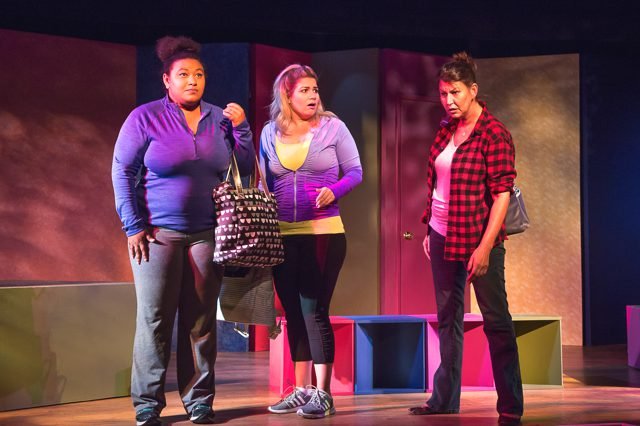 Where would any of us be today without the mothers of the world?  Everyone has had one or better yet, it is hoped, still has one.  They are so necessary to life on this crazy planet.  We honor them with their own special day every May, and rightly so!

What a fabulous production Dezart Performs chooses to end their 10th Season. It’s been a stellar season of outstanding entertainment for the Palm Springs-based theatre company beginning with “The Legend of Georgia McBride”, followed by the powerful drama “Rabbit Hole”, to Dezart’s annual tribute/fundraiser to old-time radio, with their hilarious production “On the Air”, performed by Hollywood actor/celebrities., of radio, TV, Film, and the New York stage.  Which brings us to their current production “Motherhood Out Loud”, now gracing the boards of the Pearl McManus Theatre, in the historic downtown Palm Springs, Woman’s Club, is performed without an intermission.

This fun-filled production is comprised of a series of thirteen vignettes, sketches, and monologues written by some of America’s finest comedy and drama female playwrights.  The ‘community of women’ is like a secret society to men who don’t have a clue when it comes to child-berthing and raising a family, or understanding why the shoes and purse have to match, let alone, grasp the delicious feeling of a hot bath and soak as a restorative, with a glass of chardonnay nearby at the end of a full day as a stressed out, new Mom, or as a mother again; accompanied now with double the stress of parenting chores.

Under the smart and crisp direction of Artistic Director/Actor Michael Shaw, “Motherhood Out Loud” brings insights and revelations to the males in the audience and smiles and a multitude of laugh-out-loud- moments from the ladies in the audiences; be they mothers or not.  Don’t be misled by preconceived ideas drawn from TV sit-coms.  The shock of recognition of life as it’s lived in 21st century America – and probably most everywhere else – resonates with both male and female audiences when it comes to married life.

Shaw cleverly arranges the sequencing, selection, and order in the telling of the story, much as a symphony conductor orchestrates his or her musicians. Dezart Performs, superbly gets their job done with just five talented cast members who deliver terrific poignant and nuanced individual moments on stage and display great comedy timing in the ensemble format.

The creative magic taking place on the stage comes from five fine actors whose roles fit them like expensive patent leather gloves. There are no spoiler alerts by me because they’re all self-contained,
linear-styled vignettes, broken into five chapters. The audience is here to observe and be entertained in the process.  And, boy are they entertained. The company features the talents of:  Melanie Blue, Desiree Clarke, Theresa Jewett, Leanna Rodgers, and James Owens.

Chapter One: introduces us to a sketch concerning “Fast Births”.  Men, here’s where you need to pay attention and learn why very few new fathers are allowed to watch the berthing process at hospitals.   The ladies know all about this section.  Leanna Rogers hilariously performs playwright Brooke Berman’s piece entitled “Next to the Crib.”

Chapter Two: ‘First Day’, is about the learning curves in the lives of young children.  Theresa Jewett, delivers a tender and insightful portrayal as a young mother explaining to her gender-conflicted son why he probably shouldn’t attend the Purim party at school dressed as Queen Esther. Her rationale and her ultimate decision brings a lump to one’s throat.

Chapter Three: ‘Sex Talk’.  The children in this piece entitled Sex Talk Fugue’ are now approaching, or, are in their teens.  The pieces by playwright Michele Loew, Lameece Issaq, Luanne Rice, Clair LaZebnik and director Shaw give his entire cast of four ladies and one man the okay for a full speed ahead to review their various family observations concerning the subject of sexual awakening issues in their families when they come up.  They’re hilarious and enlightening thanks to the performances of:
Melanie Blue, who is fabulous as a hip, up to date, Muslim mom with daughter Leanna Rodgers.  Desiree Clarke, Theresa Jewett, and James Owens commiserate about their various teenagers.  Owens especially delivers a wonderfully droll, comical monologue about the Christmas Holidays from the perspective of a gay man.

Chapter Four: ‘Stepping Out’ covers the children getting married and leaving the nest.  In ‘Bridal Shop’ by Michele Loew, Desiree Clarke, and Melanie Blue discuss their future daughter and son’s new relatives. It’s bittersweet but funny and hilarious.  This Chapter also features terrific singer/actor Teresa Jewett, as the mother of a son in the Army recalling the day he decided to enlist, saying he finally found out what he wanted to do with his life. Her achingly poignant performance was one of the most powerful and stunningly rendered soliloquys in recent memory; bringing tears to many eyes in the audience.  The audience was so fully engaged and so quiet, one could hear a pin drop. It was as if everyone just stopped breathing.  It’s a sublime theatrical moment not be missed.

In Chapter Five: ‘Coming Home’, Ms. Jewett has another evocative, poignantly delivered monologue in a piece by playwright Annie Weisman, entitled ‘My Baby’. Keep a couple of Kleenex handy for this one too.  Now you know why we celebrate Mother’s Day in America.

“Motherhood Out Loud” is a stellar production that performs on the Pearl McManus stage in the Palm Springs Woman’s Club, produced by Dezart Performs, and runs through April 8, 2018.  For tickets and reservations, call 760-322-0179.