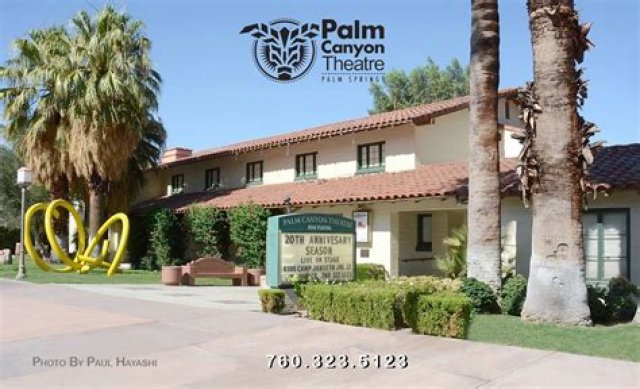 Its springtime in Palm Springs, CA and love is in the air, especially, on stage at the Palm Canyon Theatre where bravado and bragging go hand in hand in 17th-century French playwright Edmond Rostand’s famous classical romantic comedy/tragedy of unrequited love: “Cyrano de Bergerac”.

The rousing production directed by PCT founder Dr. William Layne, Ph.D., is an homage to one his favorite plays on the subject of unconditional love.  Rostand specifically wrote the play for an actor friend who needed a winning play to boost his sagging career.  Well, he certainly provided that as well as penning a romantic dramedy-play that audiences around the world have come to embrace and enjoy for 125 years.

The Palm Canyon Theatre (PCT) usually does about four or five musical productions in their season.  The pandemic has been punishing all live theatre productions for over two years, however, most of our Valley and Hi-desert theatres are pushing the envelope and will mount productions whenever possible for the rest of 2022.

Director Layne has cast 22 performers to tell the achingly poignant story of Cyrano and Roxane.  There are a couple metaphors on the foibles and folly of the human condition that run throughout that could easily recall a memory or two bringing misty eyes to those in the audience who can still relate. Yes. It’s somewhat of a tragedy masquerading as a comedy in dead earnest  Love is like that sometimes.

Cyrano de Bergerac (played with flair and style by the commanding presence of Michael Pacas) is a brash, strong-willed man of many talents.  In addition to being a remarkable, loyal and a feared duelist, he’s also is a gifted, joyful poet, and musical artist.  However, he also is the owner of an obnoxiously large nose, which causes him to doubt himself.

This doubt prevents him from expressing his love for his distant cousin, the beautiful and intellectual Roxane (wonderfully and convincingly portrayed by Katrina Dixon). Cyrano believes that his ugliness would prove to be a detriment to any romantic entanglements with women.  But we’ve seen what can happen when kindness and empathy in the world of romance via ‘Hollywood’ is introduced to audiences.

Just remember actor Ernest Borgnine, portrayed plain looking, stocky Marty Piletti, a New York butcher In the 1955 film “Marty” that went on to win him a Best Actor Oscar along with the Best picture Oscar.  Never underestimate the power of love which is not to be taken lightly be it in fiction or real life.

Solid support comes from Cameron Keys as Christian de Neuvillette, who falls hopelessly in love with Roxane but lacks the ability to express himself romantically and begs Cyrano to help him win Roxane’s love; William Stetz as the Count de Guiche, the Nobleman suitor of Roxane whose constant proposals of marriage are constantly being rebuffed by Roxane; Ragueneau, the Baker and the closest friend and confidante of Cyrano, is delightfully played Stan Jenson.  Linda Cooke as The Duenna, shines in a little gem of a comedy role which she has been doing at PCT for the last ten years.  Terry Huber as Le Bret and Matt Whitaker as Viscount de Valvert lend additional support as do a group of costumed Nuns who become the stagehands in the changing of the set pieces; and a clever directorial touch.

In the technical department led by director William Layne, the Resident Costume Designer Derik Shopinski, has created some of his best looking costumes with this “Cyrano de Bergerac” production which says a lot about his creative gifts as a designer  He’s a multiple Desert Theatre League (DTL) award-winning Costume Designer who deserves his many awards.

Set Designers J.W. Layne and Kay Van Zandt deliver a functional performing space which they also arranged as the lighting directors for this show.  Sound design is by Nick Campbell, with projection designs and props by Nick Edwards and Marsha Berry complete the creative team. Resident photographer Paul Hayashi produced all the publicity photos for the production.

All theatrical productions no matter where they are produced or performed require dedication and commitment on the part of the theatrical company to insure that every production is ready to entertain on opening night.  The only way to make that a reality is through the rehearsal process.

Rehearsals, rehearsals, rehearsals!  It’s the only way to cure opening night ‘jitters’ and build confidence in the actors' performances.  If it ‘ain’t ready’, postpone it whenever possible.  Your loyal audiences will thank you in the long run.  Alas, it’s a pity that all this talent, blood, sweat, and tears was scheduled to perform for only four days.

PCT’s upcoming production of the wacky musical of “Spamalot”, however, will perform for 10 days beginning April 22nd through May 1st.  For tickets and reservations contact the Box Office at 760 – 323 – 5123 or go online at: www.palmcanyontheatre.org.