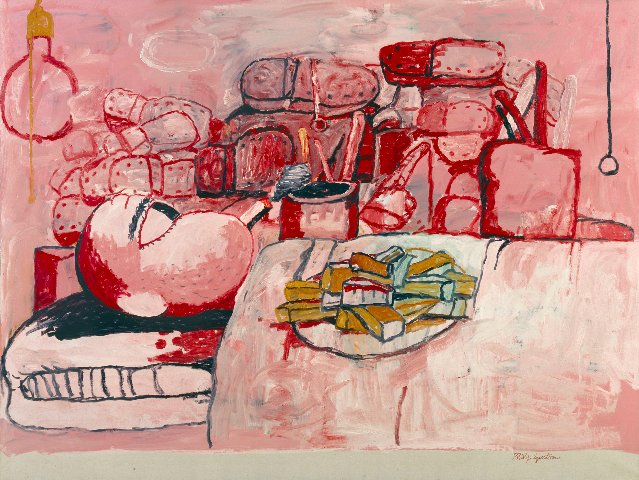 Across 50 years, Philip Guston’s paintings shifted from figuration to abstraction and back again. Yet a persistent concern haunted each of his stylistic transformations: Guston never stopped questioning the place of the painter in the world. Animated by contradictions, his works are deeply ambiguous, defined equally by dark themes that touch on what he called the “brutality of the world” and the deep joy that he took in the process of painting. Organized by the Museum of Fine Arts, Boston (MFA), the Museum of Fine Arts, Houston, the National Gallery of Art, Washington and Tate Modern, London, Philip Guston Now is the first retrospective of the artist’s work in nearly two decades. The exhibition features 73 paintings and 27 drawings from public and private collections, including both well-known and rarely seen works. Among the highlights are paintings from the 1930s that are rarely on public view; a reunion of paintings from Guston’s groundbreaking Marlborough Gallery show in 1970; a striking array of small panel paintings made from 1968 to 1972 as the artist developed his new vocabulary of hooded heads, books, bricks and shoes; and a powerful selection of large, often apocalyptic paintings of the later 1970s that form Guston’s last major artistic statement.

Originally scheduled to open in June 2020, the project was postponed by the four organizing institutions in the wake of the tragic murder of George Floyd—a decision that was met with criticism by many. At the MFA, while based on the original checklist of works, the reimagined exhibition incorporates a broader range of perspectives and focuses on interpreting Guston’s work through the lens of his lifelong commitment to raising difficult, even fundamentally unanswerable questions. For 50 years, Guston’s works—particularly his depictions of cartoonish Klansmen and his powerful late works that reference the Holocaust, family and mortality—have challenged and inspired generations of artists and evoked diverse responses. Decades later, his paintings remain open to the complexity of each viewer’s lived experience: this exhibition presents them as a conduit for direct conversations about reckoning with the inequities of the world and the role of the artist in an unjust society.

“Presenting Philip Guston’s work means acknowledging where we find ourselves in this moment—as a museum respecting the past and reaching for the future. We have thought deeply about what it means to present Guston’s paintings while respecting both the context in which they were made and their meaning for audiences today,” said Matthew Teitelbaum, Ann and Graham Gund Director. “The exhibition has significantly evolved over the last year, with a more diversified approach to interpretation, more historical references and inclusion of more artists’ perspectives, led by an expanded curatorial team and guided by many voices—all of whom have helped us to create a fuller understanding of this great artist’s work.”

Philip Guston Now is on view at the MFA from May 1 through September 11, 2022, in the Linde Family Wing for Contemporary Art. Member Preview takes place April 28–30. The exhibition is included with general admission.

“Philip Guston Now” is sponsored by the Ford Foundation. Generously supported by Musa and Thomas Mayer and The Guston Foundation, the Carl and Ruth Shapiro Family Foundation, the Bafflin Foundation, the Terra Foundation for American Art, Lisbeth Tarlow and Stephen Kay, Marilyn and Charles Baillie, Martin S. Kaplan and Wendy Tarlow Kaplan, Michael Nesbitt, Phil Lind, and an anonymous donor. With gratitude to the Council for Canadian American Relations. The exhibition is supported by an indemnity from the Federal Council on the Arts and the Humanities.

Guston’s openness to doubt is key to this exhibition’s approach. A majority of the seven sections focuses around an open-ended question, helping to illuminate not only the questions that the artist asked across his life but also those that the paintings challenge us to ask today. Meanwhile, the recurrence of particular themes and motifs in Guston’s paintings across decades drives the exhibition’s cross-chronological narrative, every gallery featuring works from both earlier and later moments. A timeline stretches across the exhibition, interweaving key moments from Guston’s life with both historical and present-day events. The artist’s own voice is represented in the galleries through quotations and through excerpts from the 1981 documentary Philip Guston: A Life Lived directed by Michael Blackwood.

Exhibition wall texts are available in the press room.

Philip Guston (1913–1980) was born Philip Goldstein in Montreal, Canada, to Jewish immigrants from Odessa, in present-day Ukraine. He was raised in Los Angeles, where he became serious about drawing at age 12 and attended Manual Arts High School alongside Jackson Pollock. As a young painter during the Great Depression, Guston experimented with different formats, materials and techniques, drawing inspiration from a wide range of sources: Renaissance frescoes viewed in books, contemporary Mexican murals studied in person and even the Sunday comics. In 1930, he met Musa McKim, whom he would marry in 1937.

In 1935, Guston worked alongside friends Reuben Kadish and Jules Langsner to paint the massive mural The Struggle Against Terrorism on the walls of a former palace in Morelia, Mexico—a commission that the famed Mexican muralist David Alfaro Siqueiros helped them to secure. The monumental frescoes compress histories of oppression and anti-Semitism into a single, crowded field, dominated by violent men in white hoods and tying the terror of the Spanish Inquisition to the brutality of Nazism and the Ku Klux Klan. By this time, Guston also began to weave together shared histories with more personal themes, alluding to his own experiences with Klansmen and anti-Semitism. In 1935, when Hitler’s rise was becoming increasingly evident in Germany, he changed his name from Philip Goldstein to Philip Guston, thereby masking his Jewish identity as did many other American Jews amid the rise of antisemitism at home and abroad during the 1930s.

In 1945, when Guston was teaching at Washington University in St. Louis, an exhibition of large-scale photographs of liberated German concentration camps was presented by newspaper publisher Joseph Pulitzer. The disturbing imagery of piles of legs would recur in Guston’s work for decades. By 1950, he sought a different relationship to the process of painting. He began working up close—without stepping back—wanting to “come to the canvas to see what would happen if I just put on paint.” This shift in process coincided with Guston’s increasing abstraction of recognizable forms, and by the late 1950s, he was acclaimed by critics as one of the preeminent American abstract painters. While visible references to everyday life and historical events would repopulate Guston’s work in the late 1960s, his use of rich brushwork and built up surfaces carried forward from this moment.

The late 1960s was a period of assassinations, increasingly visible racial riots and protests in the U.S. against the war in Vietnam, a corrupt presidency and unrelenting brutality directed at the civil rights movement. As the news flooded American households with images of violence and upheaval, Guston found himself an almost compulsive witness, “stuck in front of the TV like everyone else,” all while going into his studio to process ideas and grapple with uncertainty. Abstraction no longer made sense. During this period, between 1968 and 1972, he made dozens of small panels that contain largely familiar, everyday objects—from shoes to books to lightbulbs—painted with cartoonish contours and meaty colors. Ultimately comprising a kind of alphabet, these forms recurred in larger canvases for the remainder of Guston’s life. While pink features in earlier paintings, his luscious application of the color also became a kind of signature from this moment onward—sometimes airy, sometimes visceral, sometimes “a nice pink,” a “Sunday-comic color,” as he put it.

By the end of 1968, a single figure emerged among Guston’s otherwise object-focused panel paintings—a cartoonish Ku Klux Klansman, represented as a white triangle with black eye slits. Unlike the artist’s hooded imagery of the 1930s, these Klan figures are bumbling, idling, biding their time. Guston presented dozens of large-scale hoods at New York’s Marlborough Gallery in October 1970, which critics at the time denounced—less for their imagery than for their seeming betrayal of Guston’s prior abstractions.

Secluded in his Woodstock, New York, studio in the post-Marlborough summer of 1971, Guston channeled his lifelong love of comics into a new project, filling two spiral-bound notebooks with satirical sketches of President Richard Nixon and his cronies. That fall, he began painting again, gradually letting go of the hoods and introducing a new motif of a bean-shaped head, often seen lying in bed and staring at the ceiling—a stand-in for Guston himself, questioning how best to live in the world. From 1973 through 1978, Guston taught at Boston University, visiting from Woodstock once a month to work with students. This period of teaching also afforded the artist consistent breaks from his otherwise nonstop painting, an affirming oscillation between the solitude of the studio and the community of both classroom and colleagues.

Deep memory and a looming sense of mortality drove his relentless production during the 1970s. Many of his late works feature stacked legs weighed down by heavy shoes, which Guston referred to as “pileups.” Scholars tend to connect these paintings to a historical memory, citing the photographs from liberated concentration camps that Guston first saw in 1945. Another connection could be personal memory: one of his brothers had died young, his legs crushed by an automobile. Even as his body was falling apart—he smoked and drank too much, slept too little and suffered a heart attack—Guston completed canvas after canvas. He suffered a second, fatal heart attack in 1980, when he was 66 years old.

The MFA’s presentation of Philip Guston Now was organized by an expanded curatorial team who consulted with a range of individuals, including Museum staff, contemporary artists and scholars—testing new approaches to meaningful internal and external collaboration. The curatorial team includes Megan Bernard, Director of Membership; Ethan Lasser, John Moors Cabot Chair, Art of the Americas; and guest curators Kate Nesin and Terence Washington. They met regularly over the course of the past year with a staff advisory group—comprised of MFA employees from the departments of Learning and Community Engagement, Communications and Protective Services—whose input powered key decisions about gallery design and interpretation. Homi Bhabha, Anne F. Rothenberg Professor of the Humanities at Harvard University, served as Critic in Residence for the project—building on a relationship with the Museum over the past several years. Bhabha advised the curatorial team as they developed the exhibition and will participate in public programs. Additionally, trauma specialist Ginger Klee, LMFT, LPCC, advised on crucial aspects of visitor care, offering insights to ensure opportunities for informed consent for visitors and to prepare varied audiences for viewing the challenging imagery. In different ways, all of these additional voices guided fresh thinking about how the exhibition unfolds not only narratively but also experientially, and how to encourage visitors to interpret these paintings in relation to personal experience.

Additional interlocutors have enriched the exhibition’s focus on Guston’s studio process, the sources he drew from and close looking at specific paintings. Many of these voices appear on the exhibition audio tour as well as in-gallery videos, including artists Steve Locke, Mark Thomas Gibson, Matt Saunders, Arlene Shechet and Stephanie Syjuco; scholars Alissa Schapiro and Rob Slifkin; and Musa Mayer, Guston’s daughter and president of The Guston Foundation. Several of Guston’s former Boston University students—Carol Barsha, Grant Drumheller, Bob Freeman and Barbara Baum—have also shared their vivid memories of Guston as a teacher and mentor.

Guston’s legacy and the meaning of his work today will be further explored through public programs offered throughout the run of the exhibition. Free opening weekend programs include:

Subsequent public programs will include a lecture with Art Spiegelman, cartoonist and author of Maus, on June 5 as part of the Ruth and Carl J. Shapiro Celebrity Lectures. The Museum will also host a series of City Talks, exhibition-inspired conversations organized in partnership with community organizations—these will take place offsite throughout June, July and August, with a culminating event at the MFA in September.