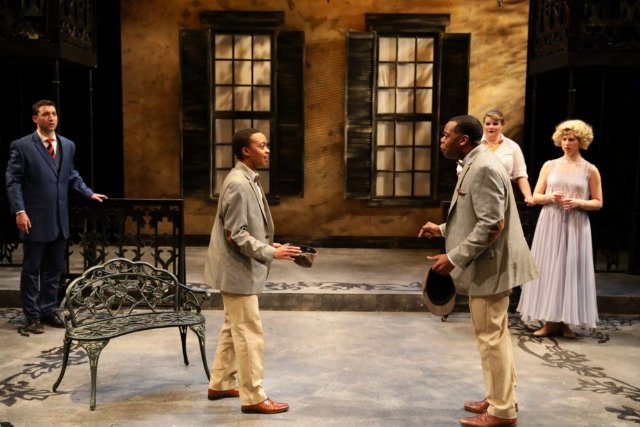 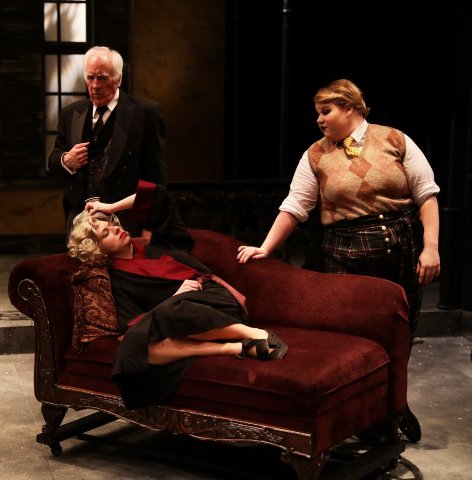 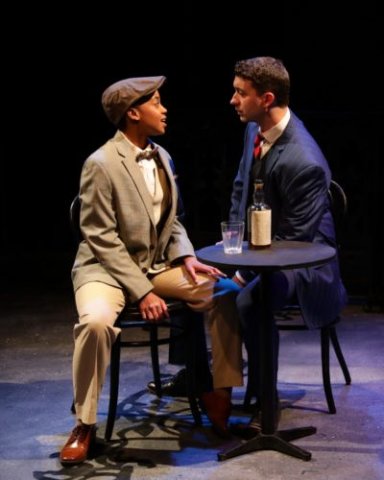 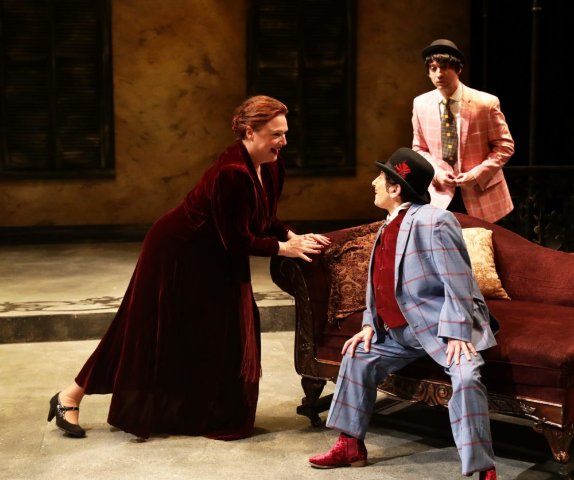 In the grand ballroom guests of a cruise ship are dancing the night away. They are attired as Gatsbys and Flappers by Chelsea Kerl. They Charleston to 1920s music selected here and composed in later segments by David Wilson. Music as performed by the bawdy fool Feste (Rachel Belleman) sets a New Orleans jazz era tone.

The merriment is roiled into a mini sinking of the Titanic as staged by director Paula Plum. With special effects the revelers are tossed into the sea. Some sent down to Davy Jones’ Locker with others washed ashore on the beach of Illyria/ Louisiana.

For the first time separated since birth are twins Viola (Hayley Spivey) and her brother Sebastian (Dominic Carter). Washed up far apart, and left to survive on wit and a prayer, each assumes the other to have drowned. A subplot is the tale of their plucky and adventurous survival and eventual joyous reunion.

Both are caught up in the misadventures of lives of others. The better to survive as washed up detritus in a strange and possibly hostile land Viola adopts male attire and identity as “Cesario.”

She is taken on and protected by a patron Duke Orsino (Alejandro Simoes). He tasks her to visit the court of his intended Olivia (Samantha Richert). In mourning for father and brother she will have none of this wooing. But oddly she takes a shine to Orsino’s gender bending messenger.

On the Elizabethan stage where boys played girls and back again this confusion of reversals is a trope of The Bard’s comedies. It was a norm for audiences’ which, fast forwarding to our own complex LGBT era, takes on different shades of meaning.

Many companies can’t resist the urge to contemporize or at least modernize Elizabethan era plays. The overworked assumption is that the time warp makes the work more palatable to contemporary audiences. But it often stretches the seams and bending a play out of shape can become confusing, anachronistic, and somewhat bloviated.

Feste, for example is played large by Belleman. With a powerful voice she belts out Wilson’s cabaret material, which while crowd pleasing, overly inflates her supporting role.

That seems to be a signifier of this production where, to varying degrees of success, the actors over or underplay their roles. Some, like the positively hilarious Bobbie Steinbach as Sir Toby Belch, swing for the fences scoring homers. We devoured every delicious raunchy pratfall by this magnificent and brilliant performer. OMG what fun! In an underwhelming manner other actors stumbled and bumbled along, under the uneven direction of Plum, more to be pitied than censured. Some, unfortunately, not in minor roles.

Overall, a dauntingly stentorian thespian as Malvolio (Richard Snee) was at times overplayed. It did make the point, however, of how annoying he could be as the servant and gatekeeper to Olivia. It set up the reversal of the prank played on him.

A trio of mischievous buffoons lead him to believe he is admired by the boss. In particular they set him up to think that, in particular, she loves the color yellow and garters. The opposite is true and in a comic highlight of the evening he strips to reveal yellow tights and boxer shorts.

When the prank backfires we get his bellowing revenge.

The reversals of the slim youth Viola are conveyed with nice nuance by the clever and resourceful Spivey. There are comedic gems as when “he” darts off stage during a boxing match to take a pee. He returns zipping up an empty fly. It takes balls, or the lack therof, to pull off such a scene with compelling panache.

The brightly light (Deb Sullivan) and engaging set of Jenna McFarland Lord has modular features. Ersatz iron fencing, a signifier of New Orleans architecture, is moved about to create a variety of setting from gardens to palaces and streets of the French Quarter. This was an effective one size fits all design scheme.

The comedies of Shakespeare with gender reversal, complex subplots, and convoluted threads are often daunting to follow. It’s best to know the plays before seeing them. This production did little to ease navigation through the narrative. That also makes it more difficult fully to get all the witty verse and gags. Welters of confusion may induce spasm of somnambulance. It’s best to come to this production rested and well caffeinated.

Overall, the second act flew by faster than the first. By the end all the loose ends were neatly nipped and tucked.

Then the production went off book. By that I mean, way, way, way off book. Not that one objected. In fact the invented finale with all of the cast joining Feste in song and dance was quite delicious. It allowed the audience to depart with a merry tune in their heart of hearts.