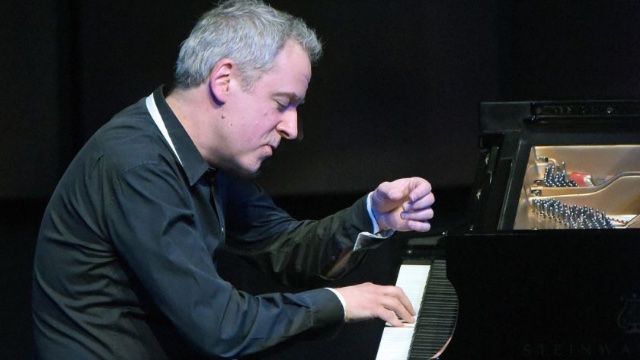 The Greene Space has invited Denk to be artist-in-residence. His first concert scheduled for March 20th was re-scheduled for April 7th.. The concert was live-streamed from Denk’s home in AChord, New York.  He immediately apologized for his old piano.  The only note that seemed not so much out of tune as unstrung was in the lowest register.  Bach in his Well Tempered Clavier Preludes and Fugues does not delve deep into that register too often. Yet he is always deep within us.

Denk is a charmer.  It takes less than a moment to  see why.  He is not giving us his opinion about a work.  Instead, touring Bach with Denk is like a tour of the heart blown up in the Benjamin Franklin Museum in Philadelphia.  The Giant Heart would be perfect for a 220 foot person.  Denk is also huge.  Not because he is inflated, but because he is modest and humble.  You sense, however, that he is close to the size of the composers he discusses, in this case Bach.  He delights in pointing out Bach, the mad scientist.  Bach, the tumbler.  Bach, the man who can move from dark to light and back again, each side of the moon made more precious by the other.

Hubert Doris taught harmony the way Jeremy Denk approaches the piano. It has been a long time since he led me through Bach’s harmonies.  He took them from inside the composer’s head.  When Bach disobeyed his own rules, we students got a charge. I thought of Doris as Denk lingered on dissonance.  For dissonance in Bach’s day would have been a violation.  Yet when you hear one, in the midst of glorious beauty, a delicious thrill goes down your spine.

As someone who studied piano with a pre-eminent teacher, I saw quickly in Dent’s approach, why the olden days may not have been so good for students. My teacher had studied with Artur Schnabel, and while she was not completely crippled by the rigidity of his approach, including metronome specifications for each measure in a Beethoven Sonata (and sometimes for each note),  there was little joy in strict textual interpretation of a series of notes. It is insane to think that music on paper is more important than performance. Textual reality in music is limited and limiting.

Denk delivers joy as he plays and as he mixes live notes with discussion. As he moves through revelations of a phrase, or of the amusing dialogue between left and right hand, or a leap, you can see him next to the composer.  It is someone else’s work, to be sure.  Denk is not an appropriator.  Yet it is as though we are meeting the composer with him, journeying, noticing, on a grand tour.

Now I am a listener.  Falling in with Denk, I too fix on a note Bach is surrounding with others.  Hearing the interplay between the clefs is a revelation as Dent guides.  Sometimes I smile.  Sometimes I am darkened too.  Denk does not for an instant leave the world of his love for the music he is performing.

His special qualities have often been noted.  Yet this particular performance, removed from the intimate Green Space to Denk’s country home, is perhaps even more intimate.  He spends so much time looking right at you, even as he plays.  His next concert is on April 27.  It is sure to be a slam Denk.