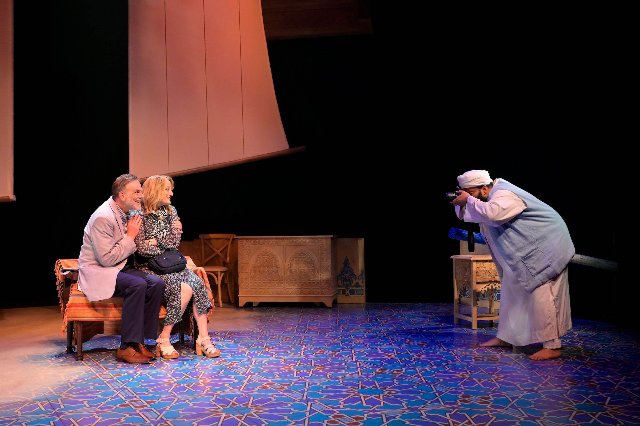 When Jean returns from the pool to the hotel room in a two-piece bathing suit and towel, husband Paul insists that she dress immediately, as their Egyptian tour guides, the recently engaged Maha (female) and Seif (male) are present.  Maha had previously been Paul’s tour guide, and she is breaking in Seif, as she hopes to shift to fashion design.  Maha insists that Jean is a tourist doing what tourists do, and that she is not offended.  Seif, supposedly speaking Arabic to Maha, is sarcastic.  Not wanting to offend local sensitivities, Paul persists, arguing to Jean that the Egyptians are not always going to say what they really mean.

This opening volley sets in motion the cross-cultural dimension of “Hotter Than Egypt,” which, by the way, is not a reference to the weather.  But the play-opening incident does raise some interesting questions.  Although cultural differences and norms clearly exist, does recognizing and acting upon them automatically affirm a form of stereotyping?  And though great differences between cultures often exist at the working-class level, generally, aren’t the richer and more educated in most places more cosmopolitan and not so bound by their society’s broader mores?  And should we cut more slack for private behavior than public action?

Yussef El Guindi’s new play deftly delves into a constellation of differences – not only cultural, but marital, economic, power, gender, and generational – some between cultures and some within.  The result is a lively dramedy that reveals the causes and consequences of the cracks in the American couple’s marriage.

Paul is a successful businessman from Wisconsin who has previously visited Egypt on business trips.  He and Jean have decided to celebrate their 24th wedding anniversary by combining business and pleasure on a trip Cairo.

Rather than a commemoration, the playwright shows how time together can expose classic, long simmering issues.  One is the asymmetry, particularly in the white-collar community, that results when the wife is a homemaker, which Jean is.  For decades, the husband engages regularly with other adults on issues of consequence beyond the family, while the wife’s horizons are limited mostly to dealing with children and interacting with other stay-at-home moms.  The husband thus may find the wife has become boring to him with less to say about the outside world.  The other is the contention that while men can become more attractive with age, that women invariably lose their appeal (this writer rejects that viewpoint), with the result that younger women become interested in older men and vice versa, often with disastrous outcomes.

Structurally, the many social and personal divides are revealed in an unusual, but effective manner.  The bulk of the stage time is taken by scenes of two-person, mixed-gender conversations, with all four combinations of principal characters well represented.  Each twosome constitutes a very different relationship, and in these dyadal exchanges, we get in-depth looks into these people, who are depicted in very real ways.  The Paul and Jean conversations reinforce the notion that people simply change over time, and that any two people don’t necessarily change in compatible ways.  We also understand the kismet of random events.  Certain uncontrollable situations can have profound impacts on relationships.

Depictions by each of the actors resonate with authenticity.  Paul (portrayed by Paul Morgan Stetler) is a great proponent of U.S. values; smarmy in his certitude; and deluded into believing that he is a great proponent of women’s rights, although he is quite condescending to his wife.  The diffident Jean (a particularly sensitive portrayal by Jen Taylor) feels her life has been wasted and dislikes her college-aged kids, but this adventure may be a game changer for her.  It’s not clear whether it is she or Paul who is more responsible for their sexual disengagement.  Maha (Naseem Etemad) is amiable, but goals oriented enough to keep her eye on the prize, tolerating what she must to get there.  The less self-censored Seif (Wasim No’mani) is “fed up with what we are in this country” but equally disparaging of ignorant foreigners.  In the end, however, he is perhaps the most complex of the characters, both in his restraint and in his foresight.

Throughout, we see enough of Egypt to get the seeds of difference that separate it from American ways.  Nothing concerning this plot line is particularly original, but thematic elements are compiled in a cohesive and interesting fashion and effectively directed by John Langs.  The production is very worthy.  One glitch is that, at the beginning, it was not clear that Maha and Seif were speaking Arabic to each other when in the company of others, though later, Paul refers to being uncomfortable when they do.  More interesting options would be for the characters to speak Arabic while projecting English surtitles or for the Egyptians to code-switch into heavy accents to identify the foreign language speaking.

The story plays against Carey Wong’s strong and versatile set that had to be redesigned from the Seattle co-world-premiere, as it was performed there in-the-round, whereas Marin has a proscenium stage.  Special touches like antiquities features and the sails of a felucca boat on the Nile suspended from the fly add to the ambiance.  Johanna Melamed’s rich sound design evokes an Egyptian feel.

“Hotter Than Egypt,” a world premiere, is written by Yussef El Guindi, co-produced by Marin Theatre Company and A Contemporary Theatre of Seattle, WA, and plays at the MTC stage, 397 Miller Ave., Mill Valley, CA through April 24, 2022.