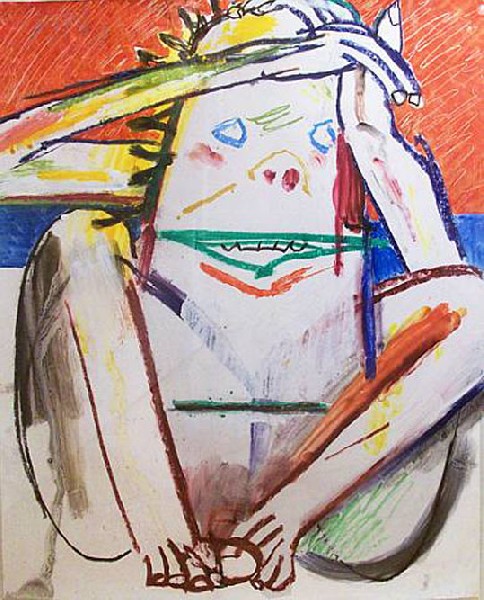 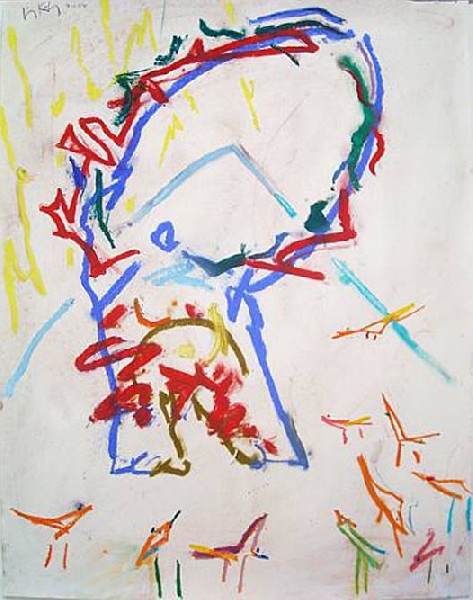 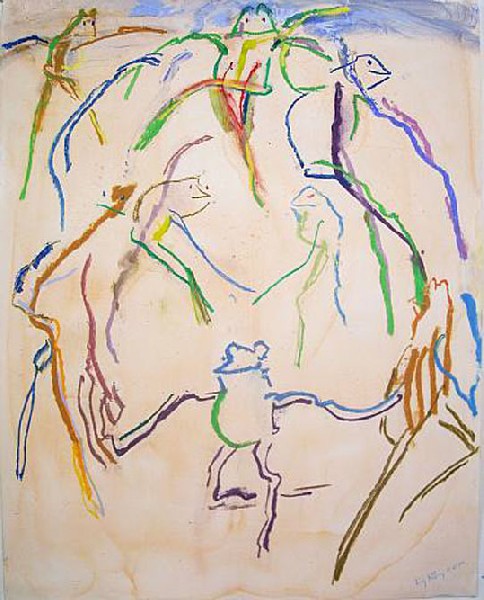 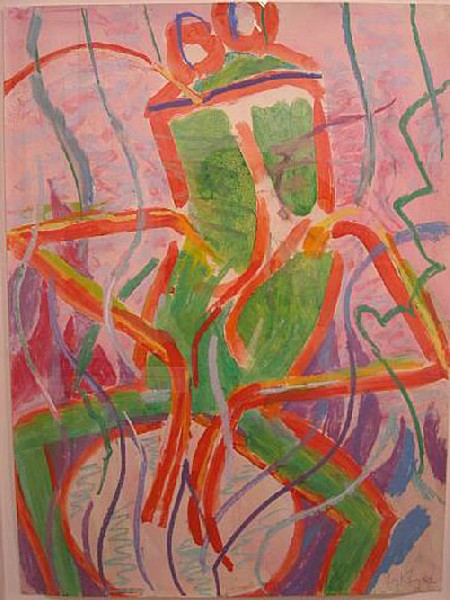 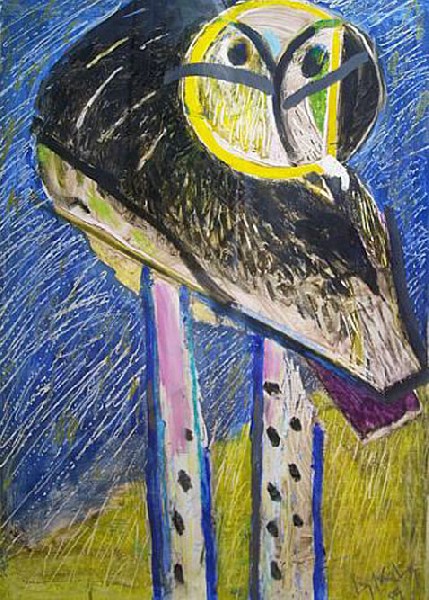 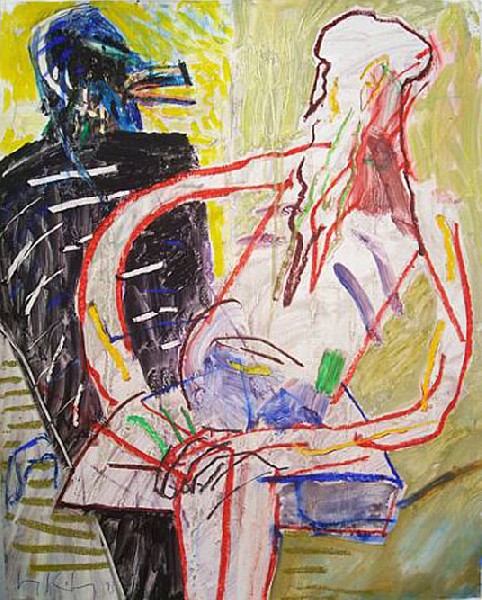 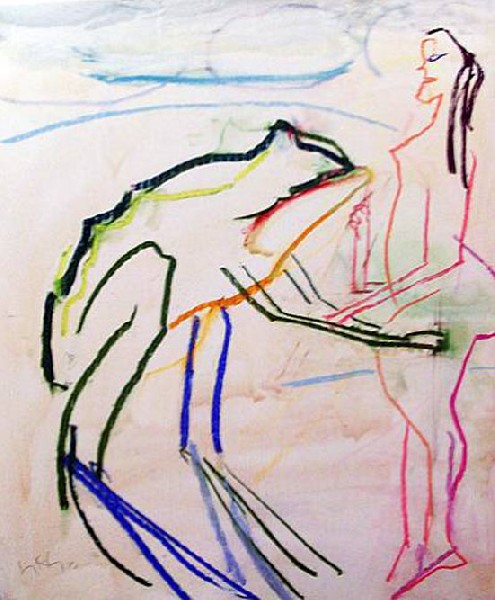 Irving Kriesberg, who died in November created a masterful environment through his artwork that has transcended reality. For well over six decades Kriesberg created works in a variety of media that explore his personal experiences, his dreams, and a collective visual archetype of ancient and contemporary human signs and symbols.

His first posthumous showing at Katharina Rich Perlow Gallery, which closed on March 31, was a survey of large- and medium-sized works on paper created during the '70s and '80s. The common theme in these works was the artist's interest in Animism.

Kriesberg's animal imagery signifies human behavior, but by using animals rather than humans the work feels even more enigmatic and mystical. Like his large-scale paintings, these works on paper are full of vibrant color and emotive expression.

They are whimsical or benign, depending on the circumstance. Altogether the images reflect some kind of numinous order that can be linked as ancient philosophy and religion juxtaposed with modern psychology and self awareness.

Since the artist never worked with allegorical intent, his process was primitive but the results are enlightened. Kriesberg was clearly ahead of his time and even today there are few artists who have achieved such powerful circumstances in their work.

His ability to show us a world with an infinite network of relationships and possibilities attested to his philosophy that the painter is the unconscious harbinger of natural and free intuition. He led the way towards an unconditional outcome for his artwork to be viewed. It touches an observer deep within their own subconscious to elicit a metaphysical response.

We see some familiar characters reappear among his pastel and watercolor pieces in this concise gallery survey.

A pastel of an ape-like creature titled BlasÃ© is one of the best examples of Kriesberg's signature color handling and liberal form. The viridian, copper, blues, greens and yellows seem magical through the artist's impulsive strokes. While this ape appears to be depressed or apathetic to what might be happening around him, other similar humanoids revel in their condition.

His familiar use of frogs such as in Frog Circle I, recalls Matisse's dancers. The frog, a symbol of fertility in many mythical depictions, is often the one engaging in ecstatic motion.

The color and rhythm in the Drummer shows the dynamism of life. The rituals and practices that have been passed down from culture to culture are presented with gusto and universal meaning.

There is the Guardian Ape, who is posed in a Chakra position with a flock of birds at his feet, while beams of light shine down upon a mountain. A familiar story in the Old Testament confirms a mystical order to these animistic themes. In the desert, Moses brought the commandments down from a mountain and presented them to the community, and this demonstrated a covenant on which to lead an ethical life.

Of course, this message is apparent not only in Judeo-Christian belief, but non-western cultures that consider Pantheism and a balance between the spirit and the natural world.

In the 1960s Kriesberg went to India, and his notion that animals had souls just like humans was affirmed. In the 1970s Kriesberg traveled to the Naropa Institute in Colorado and became inspired by Buddhism; his paintings and drawings began to show a process that suggested a natural order in nature.

He presented an idea that all things were equal and represented the many tenants of the natural and cosmic worlds. His unifying of the figure and ground that has been a basic trope of modernism had long been prevalent in ancient civilizations' artwork. Kriesberg's drawings evoke Pre-Columbian and druid folklore and relics from Eastern Asia, Greece, and Rome, in a style that can only be attributed to himself.

A rare artist like Irving Kriesberg reveals little about his intent but provides us a wealth of communication interlinking vast worlds of diverse cultures into one canvas.

It is clear that Kriesberg is a timeless artist, and his work will never cease to be relevant and momentous. His use of line, color and space are examples of modernism, but his approach and style cannot and shouldn't be contextualized and packaged for the purpose of academia.

Most art historians and critics marginalized Kriesberg's status in the "artworld." His style and progression stood free from the constraints of art theory. His career was diverse and difficult to pigeonhole.

Kriesberg remains an unsung genius who admired the romantics and Eastern civilization, but never thought about leading or following any specific movement other than what "welled up in his mind." With Kriesberg, art becomes synonymous with life. It explores and tests the vast differences and similarities among culture in order to connect meaning to the human condition. The colors, lines, and space give a very strong indication of reality in an innate and rational sense.

Kriesberg's work is exciting and inviting for anyone willing to confront it.