The Revisionist with Vanessa Redgrave 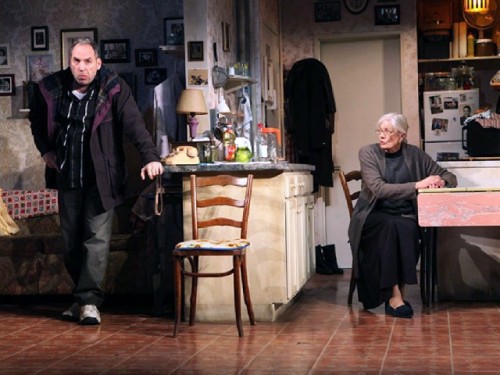 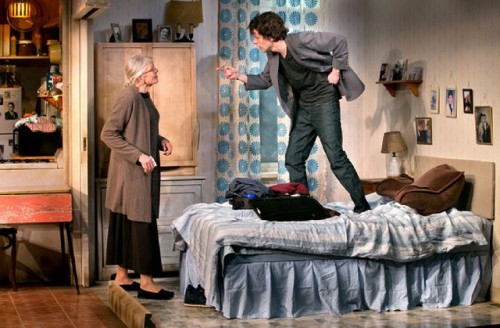 That’s playwright and actor Jesse Eisenberg jumping on the bed. 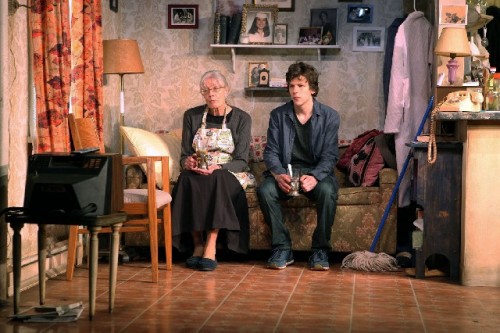 Vanessa Redgrave and Eisenberg in a contemplative moment. 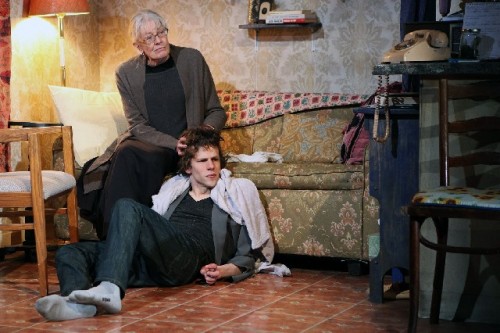 It is a rare treat to see the renowned Redgrave in such an intimate theatre.

The Revisionist which opened at the intimate Cherry Lane Theatre on February 27 for a limited run has been extended, with great good reason, a couple of times.

In this case, the great good cause is 76-year-old Vanessa Redgrave at her incandescent best. It is a plateau, she, or any great actor for the matter, fails to reach on every outing. I am particularly thinking of her two most recent Broadway appearances.

In Joan Didion’s, The Year of Magical Thinking (2007), though Redgrave demonstrated a riveting presence with a capital P – after all this is her calling card – she was unable to bring what was essentially a bunch of black words on a white page sufficiently alive.

It didn’t help that she spent, as I seem to remember, more time tethered to a chair  than standing. Though her performance was nominated for a Tony she lost out to Julie White in The Little Dog That Laughed.

In Eugene O’Neill’s Long Day’s Journey into Night (2003), for which she did win a Tony, her performance was boldly acted and exciting to watch. No stage actress is as wildly experimental, or as extravagant in their acting choices, than Redgrave. You should have seen her clawing the walls and incessantly twirling her hair. In my mind’s eye, however, she never quite captured the drug addled Mary Tyrone.

And while I’m at it, Brian Dennehy, most always a bull in a china shop by weight and size alone, was no great shakes as Tyrone either, this despite  winning a Tony for the role.

Of course, bearing in mind Watson and Imprinting, A Long Day’s Journey into the Night being the very first play that I ever saw – back in 1956 – the roles of Mary and Tyrone, deeply embedded in my brain, still belong to Florence Eldridge and her husband Fredrick March. It is a memory that I will take to the grave.

The Revisionist takes place in Poland. The plot, at least outwardly, is quite simple. Inwardly, the deep down lives of the characters are complicated. What makes the play seem more than it is are the strong performances of its three actors.

David, a self-centered young writer played by Jesse Eisenberg (who is also the playwright) arrives in Poland for a week’s stay with his second cousin Maria (Redgrave) who he met once when he was 10. It is a meeting that he has no memory of.

He has come to Poland to revise his recently rejected novel though he spends more time smoking grass than working on his book.

Ignoring the generosity of his cousin who is both feeding and housing him – she even gives him her bedroom and takes to the couch – he spends his time, rudely, and often vociferously, worrying about his creature comforts.

The third character in the play, adding a bit of humor, and a whiff of danger, is Zenon (Daniel Orekes), who in this play only speaks Polish. The son of a recently diseased friend, Zenon’s role in Maria’s life is to help her with shopping, as well as shave her legs once a week.

It seems, as Maria explains to David who is shocked at seeing this, that Zenon used to shave his mother’s legs. When she died he switched attention to the still shapely legs of Maria. This could be an act of nostalgia, or perhaps there is more than meets the eye.

The thrust of the play, a kind of duel, are the verbal and physical exchanges, many of them heated , between the intractable Maria and the equally intractable David. They try, mostly in vain, to open up their hearts to each other.

Yes, some secrets, like Maria losing her family in the Holocaust, seep out. Others, left unexplored by the playwright, remain deeply buried.

Eisenberg, employing his usual jerky quirky movements and rat-a-tat talk – the same physical qualities that we experienced in his Oscar nominated performance in The Social Network, and in Asuncion, his first play– does hold his own with Redgrave. Once, that is, when you adjust to this annoyingly tick-like behavior.

Though appropriate for the David’s character, if you want to grant him that, I could not help wondering if Eisenberg’s jerky movements and stacatto talk register as affectations. Is all that we are ever going to get from this actor?

I am thinking of Matthew Broderick’s cutesy pooh antics in Neil Simon’s Brighton Beach Memoirs (1983). At age 17 such antics were both new and charming. Thirty years later, Broderick, now in his early 50's, is still playing, with far less effect, the same card. Which brings me to Nathan Lane. Here too we have an actor saddled with the similar reputation of playing the same schtick over and over.

Of course, underneath Lane’s funnyman façade – for starters think The Producers, A Funny Thing Happened on the Way to the Forum, and The Addams Family – rests a serious set of acting chops. Most recently we experienced the best of Lane in his portrayal of Hickey in O’Neill’s The Iceman Cometh a year ago at the Goodman Theatre in Chicago.

The joy of the evening was watching – studying is a more accurate word – Redgrave as she limberly negotiated John McDermott’s set. It conveyed a small, highly detailed apartment, perfectly outfitted for an old lady.

As I always did when watching Uta Hagan, another great actress that demanded attention be paid, my eyes were glued to Redgrave’s every move, action, facial expression, and eye movement, looking for a spot where she falls out of character. This never happened.

Just as each actor gets the perfect amount of attention from Redgrave, in this prop heavy play, there was no dress, blanket, spoon, bottle of vodka, radio, TV, telephone, or family photographs, that Redgrave didn’t make us believe she had been living with for decades.

Did I tell you that she also speaks pure Polish, as well as Polish accented English in the play?

Now this is great acting.